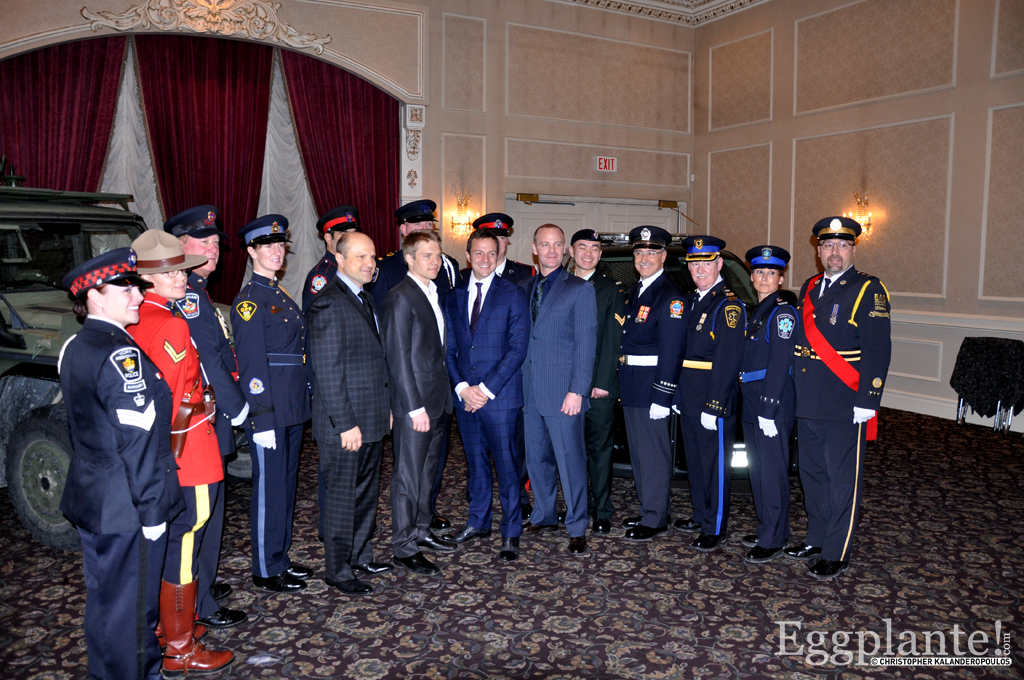 Every so often, there’s this thing that comes along that inspires you. Sometimes it is an incredible television show. Perhaps it is a person, or an organization. Even more rare is when these three things all hit you at once. And that is exactly what happened to me this past Saturday night.

This isn’t the typical Eggplante post. It isn’t going to have lasers or flaming ninjas. No video game reviews or concert photography. Every once in a while, we need to give back, and this is my way of doing that. So take this to heart. Maybe I’ll throw in a couple of interviews with the cast of Flashpoint. Who knows. I warn you: this post does get a bit heavy on the language in the interview. It is to show the raw emotion and tenacity with which Enrico speaks, and should not be taken lightly. It is not gratuitous, it is a means of bold expression.

On the 18th of February, the Tema Conter Memorial Trust held their 10th Annual Tribute Gala. For those unaware (which, admittedly, I was up until about a week ago), this organization’s mandate is to educate the public and provide support to first responders – Fire, EMS, Police, and Military personnel – dealing with Post-Traumatic Stress Disorder (PTSD) or Critical Incident Stress (CIS).

The Gala was attended by many dignitaries and special guests, such as Maurizio Bevilacqua, the Mayor of Vaughan; Chiefs and Colonels of the York Region EMS, Fire, Police, and Canadian Military; and cast of CTV’s Flashpoint, in addition to the shows creators.

The goal was to raise money for the organization, started by Vince Savoia, a former Paramedic with his own tragic story of life and loss that sparked his journey to create support for first responders dealing with PTSD and CIS. A silent auction was held for dozens, if not hundreds of items, the banquet hall sported some of the province’s finest law enforcement vehicles, and the room seated hundreds of guests. Without getting too far into details of Vince’s personal story (which you can read here), the organization has been in existence for a decade now, and has just announced their spokesperson: Enrico Colantoni of CTV’s critically-acclaimed series Flashpoint.

I spoke with both Vince and Enrico, along with the others from Flashpoint in attendance – David Paetkau, Sergio Di Zio, and Michael Cram – along with the series’ creators Stephanie Morgenstern and Mark Ellis.

Vince Savoia: The mandate of the charity is to raise the awareness of the effects of acute post traumatic stress and how these stressors affect Canada’s front line emergency service providers and members of the armed forces.We do that through education – we held an educational conference today – we do a lot of public speaking, going to colleges, because I’ve always believed that education is key. The more information that we can provide to the first responders before they hit the street, the better they will be at identifying and coping with the signs and symptoms.

Eggplante!: That’s quite a tall order, though.

VS: You know, it can start from anywhere. An officer might see a child being the victim of a sexual assault, or, in my case, I attended the homicide of Tema Conter. Even though I didn’t know Tema, for some reason, I had made a personal connection with her. And as a result of attending that call as a paramedic, I started to go down that road of having a tremendous amount of guilt for not being able to help her. There was nothing I could have done to help her anyways. As a professional, I knew she was deceased, but as a paramedic, you’re trained to save lives. When you come across a situation where it is a senseless death – you know, any homicide is senseless – you come into a situation where you can’t help, and you carry around a tremendous amount of guilt. It was totally irrational, but that’s the way my mind processed that particular incident.

E!: Do you find that the education you put out is more for the general public, or for those with aspirations to become a paramedic, police officer, or firefighter? 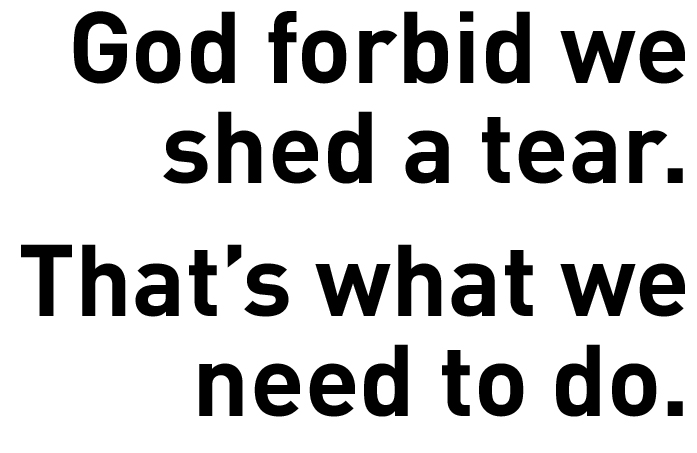 VS: It’s also for the first responders. One of the challenges that we have as a society is dealing with the stigma of mental illness. Post Traumatic Stress Disorder is classified as a mental illness, and while I don’t agree with that, I’m not a psychiatrist. It’s a byproduct of the job that these people face. The problem is that, because the profession tends to be dominated by men, we’re told to suck it up and move on to the next one. God forbid we shed a tear. That’s what we need to do.

E!: Does a show like Flashpoint which has such a human side to it that you don’t see in a lot of these crime shows help with education? It is obviously still about action as well, but does it help in getting the point across to people that these are real issues?

VS: It is helping. Shows like Flashpoint try to capture the essence of what it’s like to be an emergency responder prior, during, and after a call. And it’s interesting because people who know me and the work that I do, it clicks once they see these shows and they realize what I do and why. So from an awareness perspective, they’re very good. Are they helping the guys and the girls on the road? Still hard to tell. Because at the end, it is still a show.

E!: So what’s next for the organization?

VS: Well, our focus is still going to be on education; education to us is key. We’re working at developing curriculum so that we can actually give it away to the community colleges. We’re looking at developing curriculum for adults so that we can provide web-based education so they can get it wherever they want. That’s our focus. Let’s get the awareness out. Let’s get the education out. Let’s be there for these men and women.

E!: Thanks very much. This is a very worthy cause, and it’s great to see that you’re really starting to get the support you need.

My talk with Vince was short, but it is clear that the focus is there – the organization is committed to helping those who need the support and education on the front lines. And what may surprise you is that the celebrity spokesperson they’ve lined up is so genuinely interested in helping this organization, it almost brought him to tears in our interview. From CTV’s Flashpoint, my interview with Enrico Colantoni:

Eggplante!: So obviously with Flashpoint, it’s a very emotional show. You started with comedy on Just Shoot Me, did a bit of drama and comedy in Veronica Mars, and now you’re full on into the heavy stuff. It’s heavy stuff this show. I saw you getting a little emotional doing your speech there – does a show like Flashpoint bring you any closer to anything that these first responders go through?

Enrico Colantoni: You know, it’s a combination of having a brother who was a policeman for thirty years and adoring him, watching him retire, watching what he went through, and then of course you meet enough guys doing the show that live it every day. What we go through as actors, of course you have to have empathy, but not until I did this show did I realize how important first responders are. And I forget – ’cause you know everyone gets pulled over by a cop and has a bad experience. Everybody has that bad taste in their mouth. 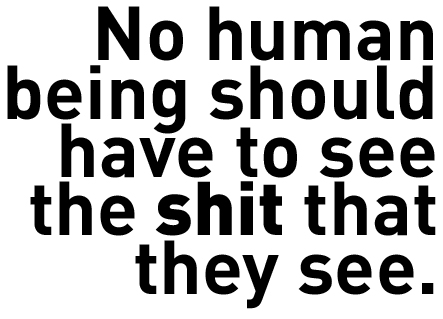 But you forget what they fucking do. You forget what they’re committed to. All these soldiers, fire, EMS, everyone. Holy shit, we’re at fucking war. Everyone that goes over there and comes back alive is just like “thank God” and everyone who doesn’t, it’s like “God Bless You”, because they’re making the ultimate sacrifice. Because I’m a selfish son of a bitch but, you know, you meet someone who answers that higher calling and nobody knows what they do. You know, I’m an animal lover, I’ve got a dog, but I’ve never associated myself with a charity until now because… well, because people aren’t supposed to see the shit they see. No human being should have to see the shit that they see.

E!: So this obviously really hits home for you.

EC: Again, yeah, because it’s true. It’s true. You do a show like this, so I’m an actor, I empathize, I live vicarious, I go through the pain. Of course, I drop it because I’m an actor. But I have a brother who did it for thirty years. Who wears it. Who still has it. But what else is he going to do? Every time he answers a call, he’s gotta deal with someone who’s gonna be belligerent or wanna take a swipe at him. You know, it’s not always a gun trying to kill you, it’s just an emotional abuse they have to take every day.

E!: The scene that Spike does with his father in the last episode – was it hard seeing something like that? It’s not often you see that kind of emotion in a show like this.

EC: You know what, you have to have scenes like that just artistically. Just for the scope of it. It’s not always about the guy who turns to booze or the one with the crumbling marriage. It’s about a guy who exemplifies someone who answers the calling at the expense of something more personal. How do you do that? I mean, I wanted to be an actor. It caused a huge rift in my family. I don’t know what possessed me to go to New York to do what I do, just like I don’t know what possesses people like that to put their lives on the line every day. I didn’t wake up wanting to be a soldier. But these guys said, you know what, I want to fight for my country. For what?

They wake up wanting to do that! That’s why I’m proud to say that this show is Canadian. What other country in the world has a peace-keeping military, rather than an offensive one? There they are in Afghanistan doing their thing. The only thing I have in common with these guys is that I have my own integrity for what I do. I wake up every morning happy to be where I am and what I’m doing. Anybody who’s willing to put on a uniform and is willing to walk the walk is willing to be there in the physical. Because integrity is physical. Integrity is doing. It’s like putting those boots on every day and saying my boot laces are ready to fight. To fight.

The honour it was for me to speak with Enrico can not be conveyed in words or understood by reading it here. He is such a powerful yet humble presence that I truly feel he is the best spokesperson for this organization. He gets it. He is the only actor I’ve met who goes beyond their job to really understand what the real life character is feeling.

Flashpoint’s fourth season is currently filming and will hopefully be on air sooner rather than later. In the meantime, watch every single past episode on CTV.ca to get caught up with this incredible series if you haven’t already seen every episode twice. Which you should.

The moral of the story – something new for Eggplante – is that everybody needs to ask for help. Whether you’re a student, a parent, a police officer, or paramedic, everyone can always use some help.

To find out more about Tema Conter Memorial Trust, go to www.tema.ca. 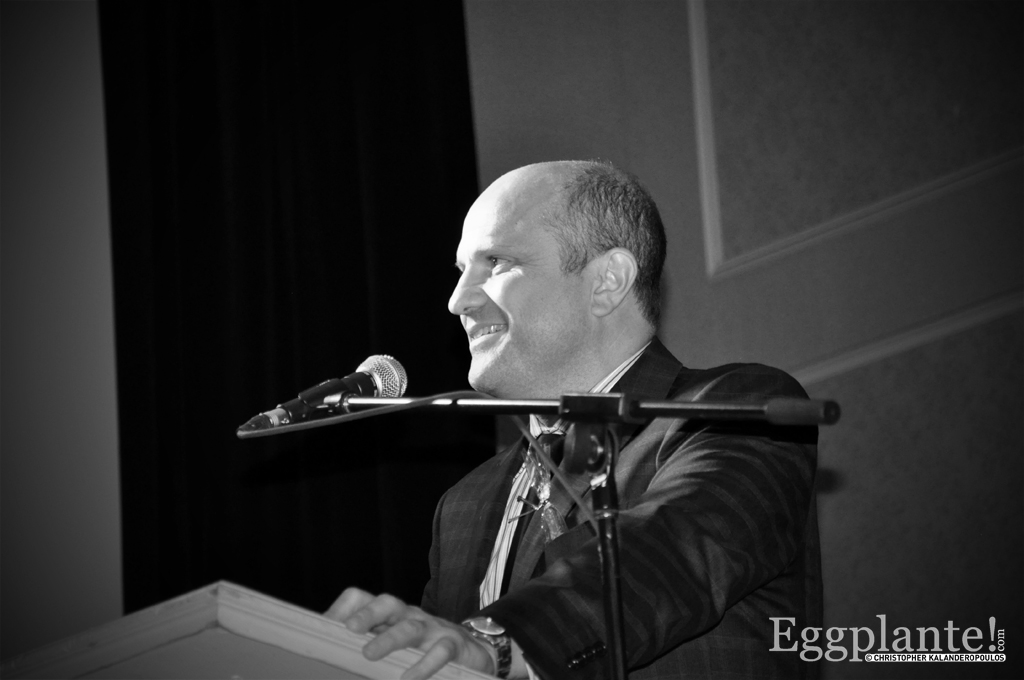 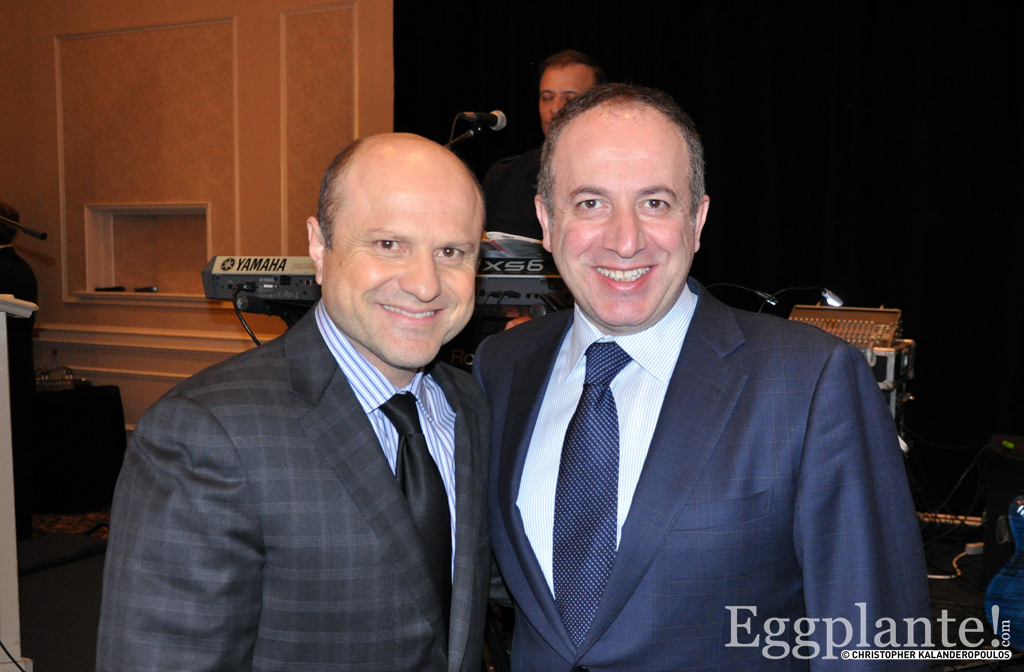 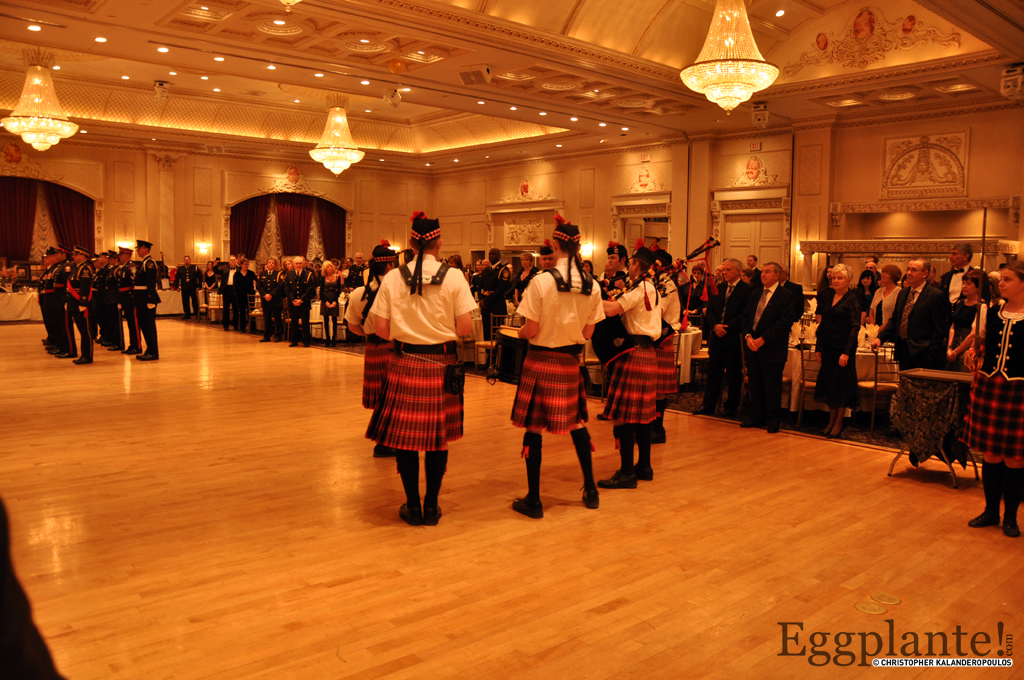 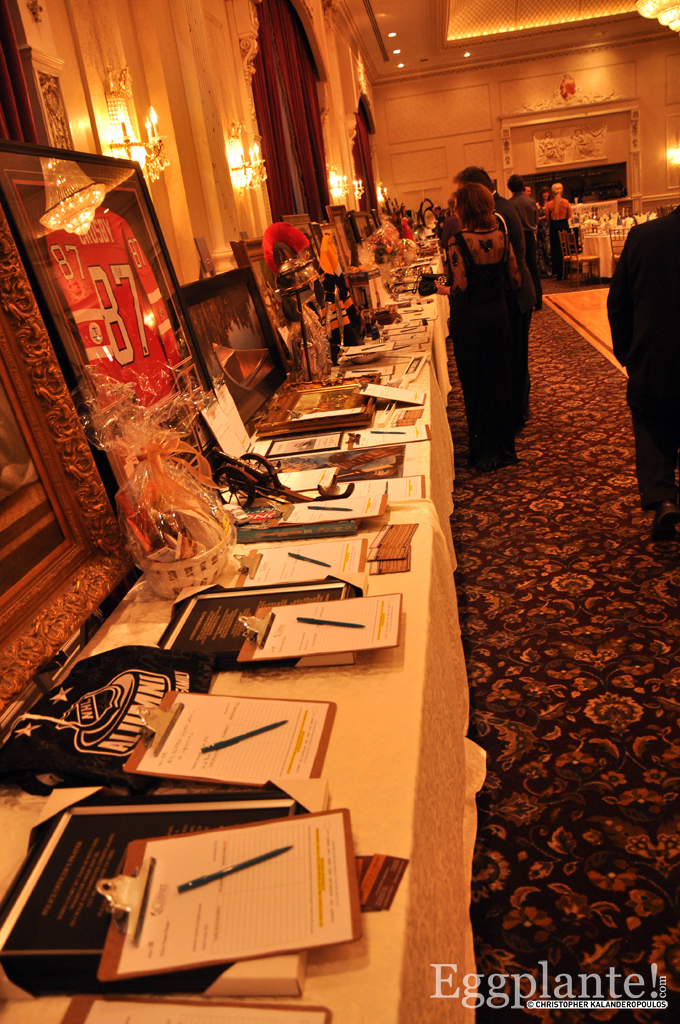 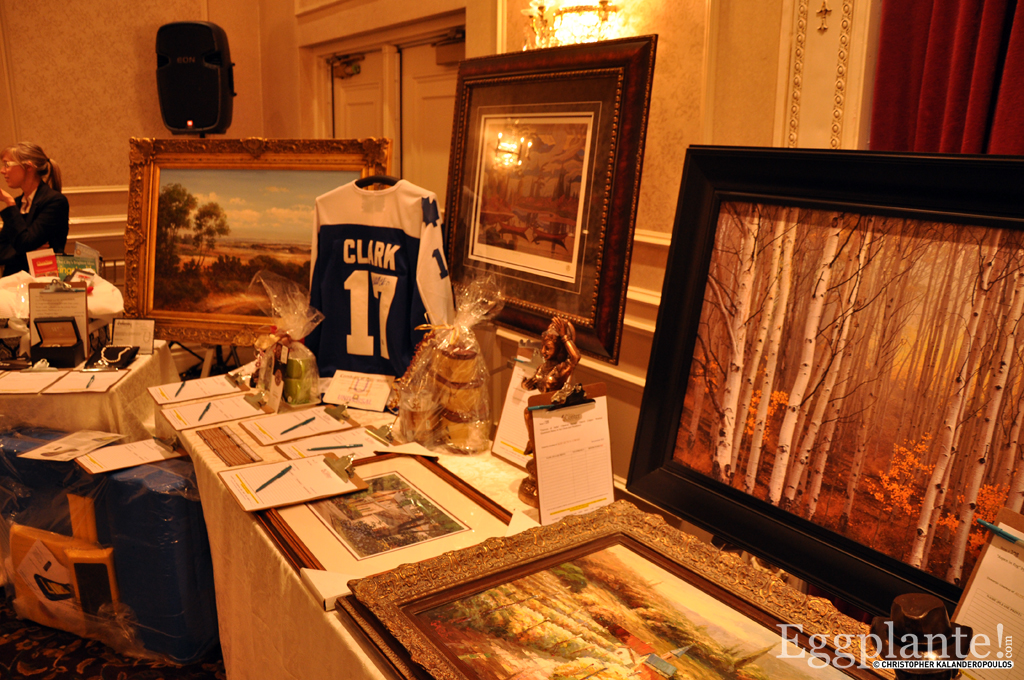 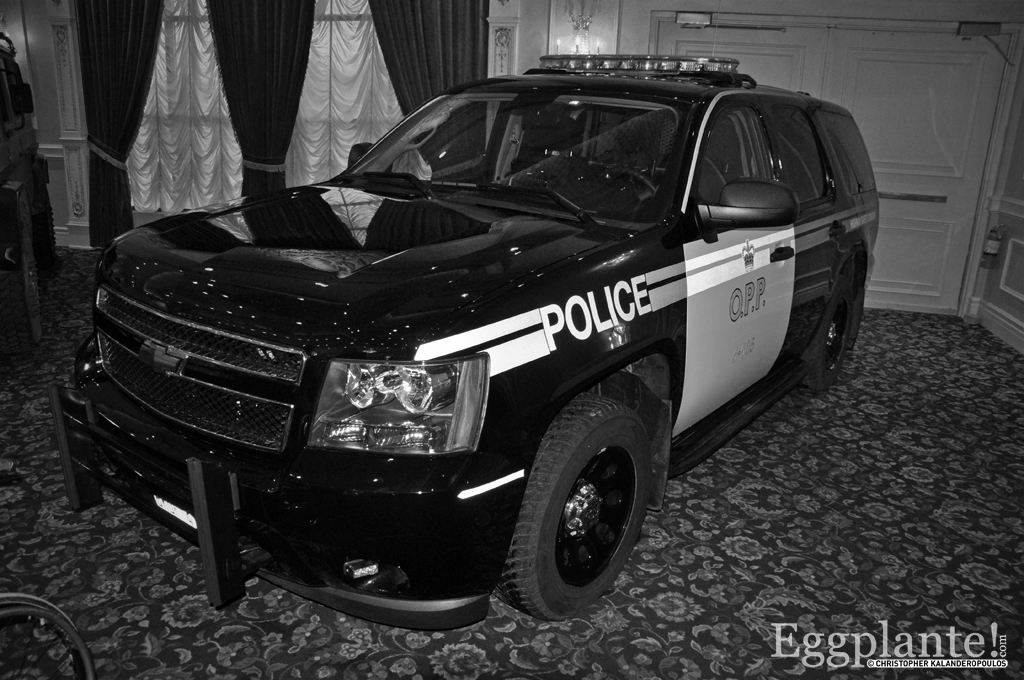 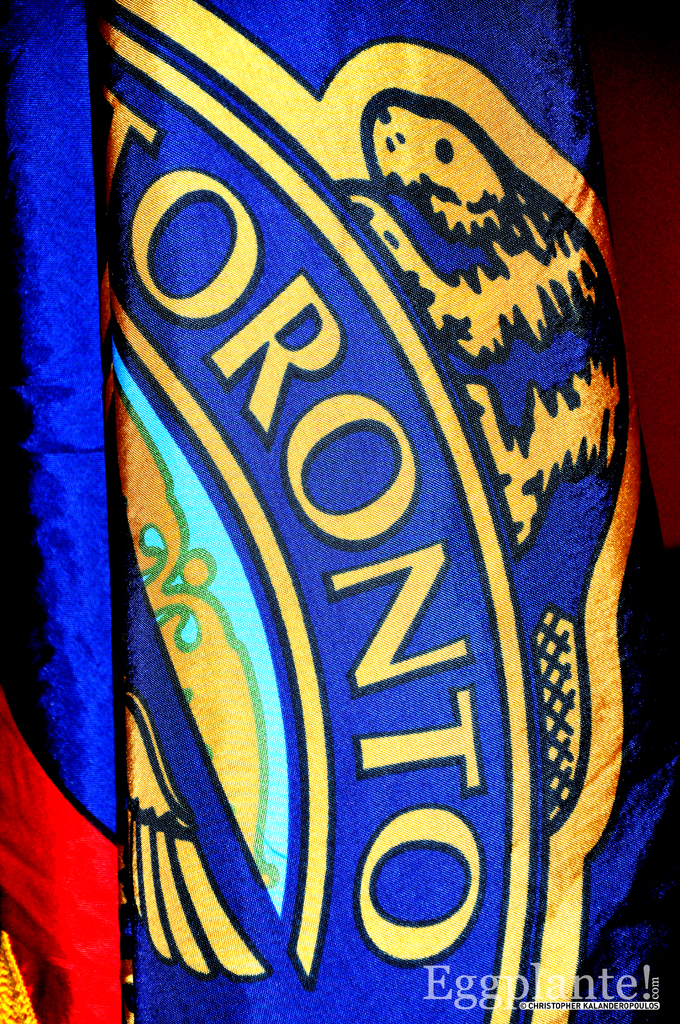