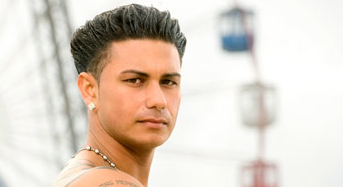 These kinds of events are not the typical Eggplante fodder. But with fodder in mind, I bring to you the crap that is Pauly D and Mike “The Situation” from MTV’s Jersey Shore. While I don’t know them personally, these guys seem like total douchebags. Completely self obsessed and famous for doing nothing more than putting shellac in their hair, the girls swoon for who knows what. I mean, the guy has a Cadillac tattoo down the side of his torso. Yeah, a Cadillac. Tattoo!

Either way, the guys were in town to “DJ” a party at Wetbar and Suite 106 in Toronto over the weekend. The party was cramped, the music was pretty crappy, and the reason DJ was written in quotes there is because neither Mike nor Pauly D did any actual DJ-ing at Wetbar. The place was rammed over capacity at more than 1000 people between the two clubs, and it was absolutely chaotic. No one could move, fights broke out, people were falling on each other, and cover was $20! For a guy with a blow out! He should be paying me to see him!

Not my kind of thing, and not really the Eggplante-style event, but I wanted to test it out and see what you think of these kinds of events. Let me know in the comments below or on our Facebook page. Or follow us and send a message on Twitter!

Next up: Snooki is coming in two weeks. Have fun; I won’t be there.