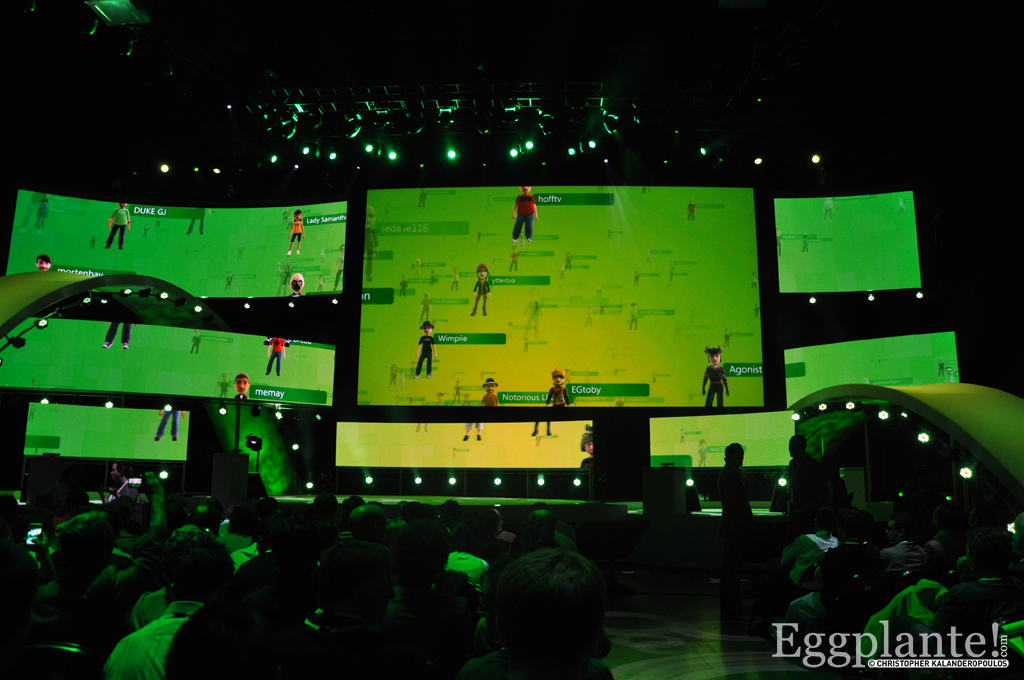 Whew! Now this is a conference! And considering that Microsoft had one of the least hyped pressers of the three big guns, that’s quite the statement!

The show started off with none other than Modern Warfare 3. Personally, I’ve never been a fan of the series, not because they’re not great games, but just because I was never really thrust into that world. With that said, the live demo they put on stage was jaw dropping. The sheer volume of things happening at any given time was ridiculous. First off, we’ve got things like submarine explosions, missile launches, and a boat chase. But that’s the tame stuff! We saw things like fighter jets crashing into the side of an aircraft carrier, missiles being directed at a crumbling New York City, and the brooklyn underground falling victim to a flood. Incredible things here so far. 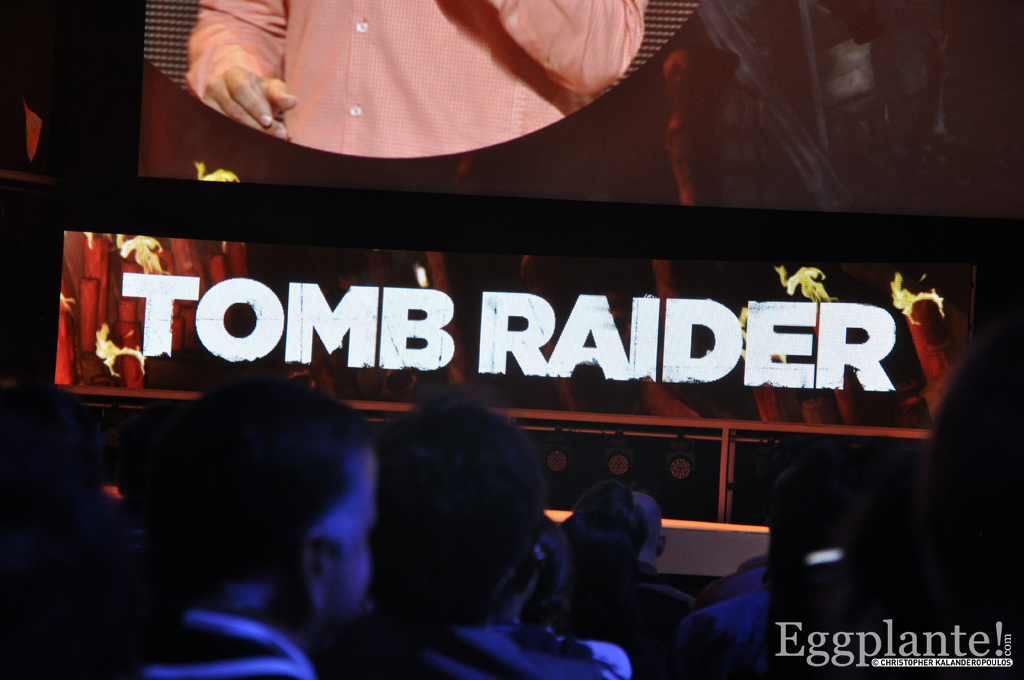 Next, the adrenaline just gets ramped up with Tomb Raider. Again, I’ve never fallen in love with Tomb Raider (Lara Croft, on the other hand, I have), but this game makes me rethink that. Visuals here are just riveting. As Lara goes through water, the blood washes off her and her skin becomes clearer. The opening scene involves her having to set herself on fire to escape the cloth tying her up just before she crashes to a ground of glass shards, stones, and skulls. Gruesome stuff. Awesome, but gruesome.

Mass Effect 3 was confirmed for the first time today to have Kinect capabilities built in. Now, that might seem weird, but it actually worked pretty well. You can use your voice to mutter commands at squadmates and to progress through dialog. It was sloppy at times, but it got the job done and seemed to make things just a bit more fluid. 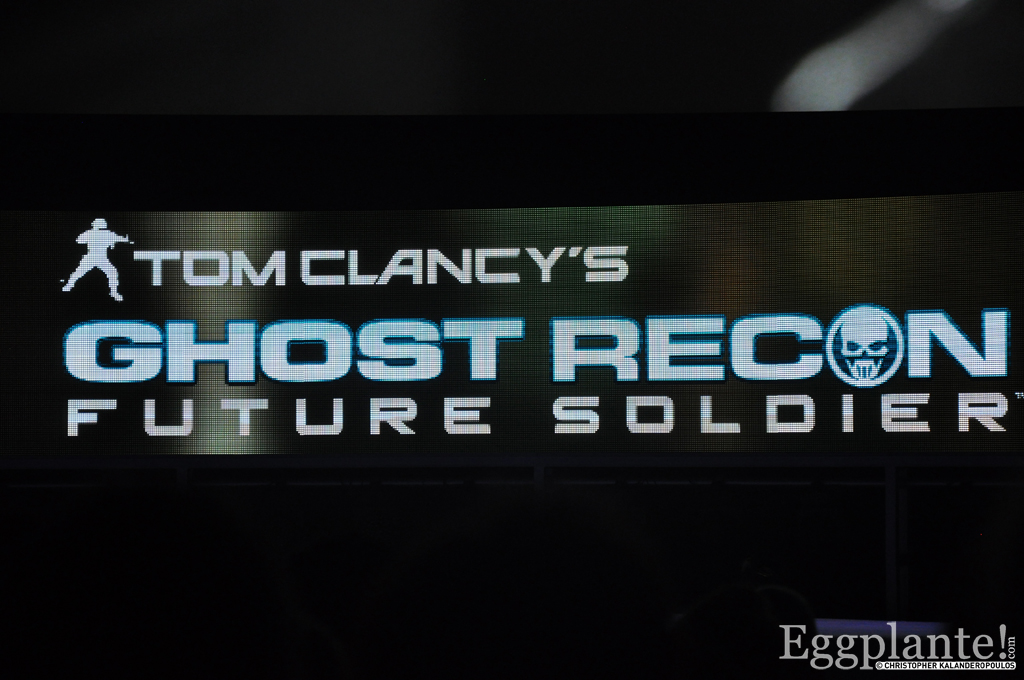 Ghost Recon: Future Soldier. No introduction needed here, folks, as this game blew me away last year, but was sadly delayed as many a Ubisoft title are. With that said, this game now has some pretty amazing Kinect functionality built in! The Minority Report-like controls got plenty of ahhs and applause from the crowd as the customization feature for the weapons was shown off. Really great stuff here. And to make things better, Yves Guillemot, the founder of Ubisoft, was on stage to announce that every future Tom Clancy game would have Kinect capabilities built-in. That, for me at least, means incredible Splinter Cell experiences around the bend! Can’t wait – so get to it Team Toronto! 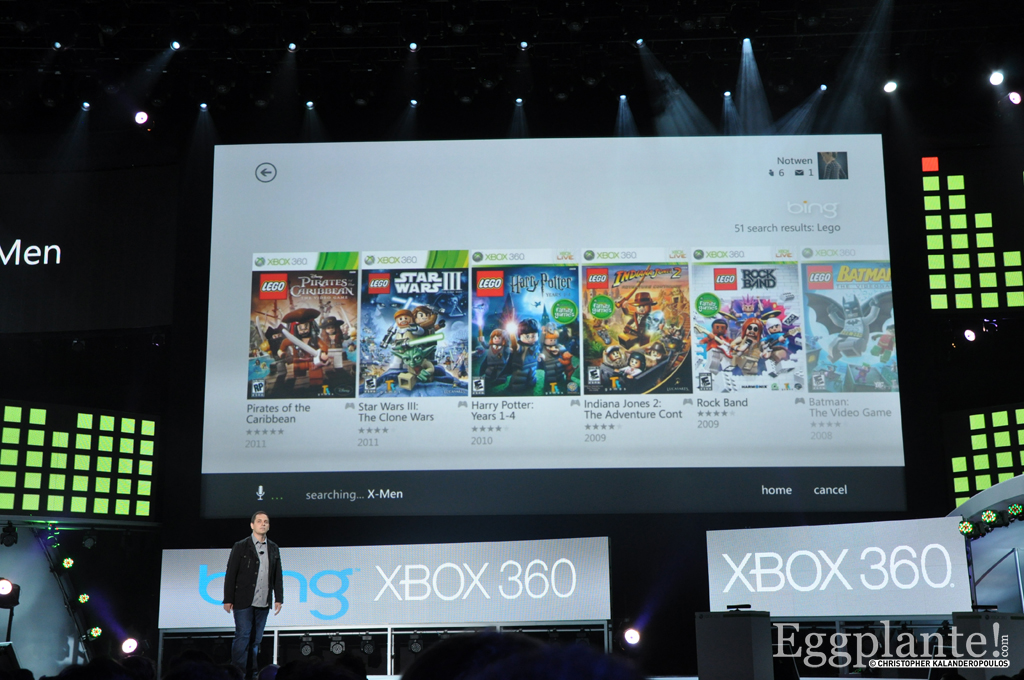 From here, Microsoft went on to discuss more about the (new) New XBOX Experience, which involves Kinect as a voice sensor, a redesigned user interface, live television, YouTube, and bing integration, and a whole lotta awesomeness. It launches this fall, and while there isn’t much to say about it that isn’t self explanatory, this is where Microsoft proceeded to tell us that the following games are all going to be 360 exclusives. This is great, because the following are all incredible titles. With one in particular you might really enjoy.

First up, Gears of War 3. Another title I never got into, but hey, it’s a massive title. Kind of a yawn for me. But Ice-T was on stage to demo the co-op play. I was more taken by the fact that he’s from Law and Order standing up on stage there than I was by the fact that we were seeing new Gears footage. Meh. 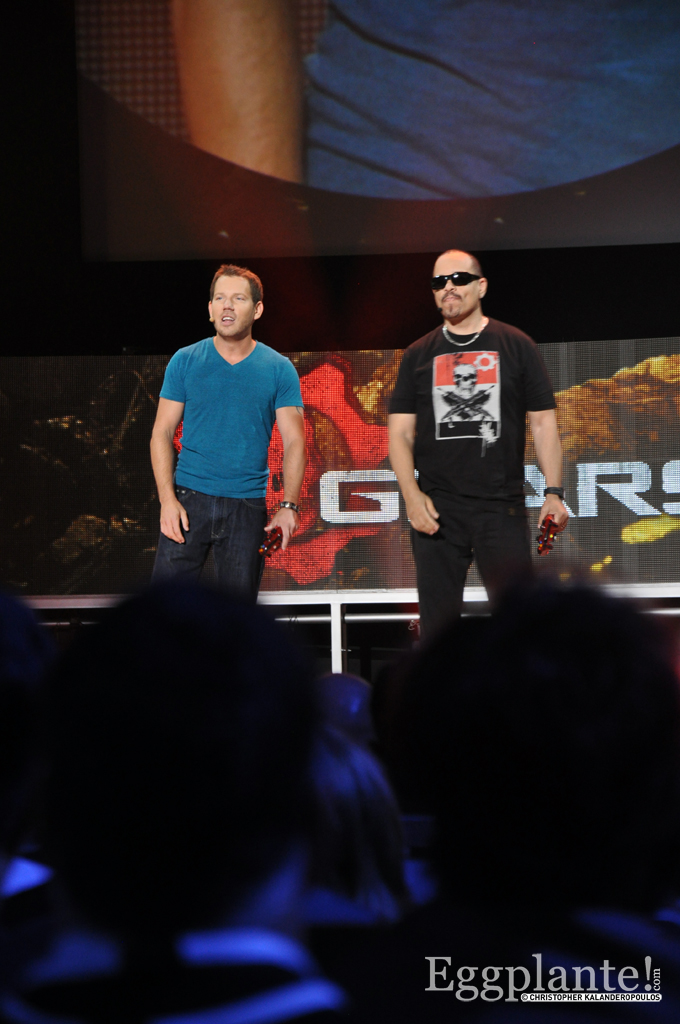 Now this is something I can get behind: Halo: Combat Evolved Anniversary Edition. The name sucks, but hey, it’s Halo. The graphical upgrades look great, and I’ll be more than glad to revisit this game (again), so I’m glad this one was announced! Although let’s be honest, we all knew it was coming…..

Fable: The Journey was also announced. It seems to be entirely Kinect based, and it starts slowly and seems to be on rails. Not sure about this.

A bunch of Kinect games were then shown off, and while they’re all great concepts, I just don’t see any of them being successful enough to have a place in the press conference. To start, there was Disneyland Adventures which supposedly lets you go through the entire Disney park experience and ride all the rides. Seriously, this isn’t worth that much. Kinect Star Wars looked phenome.. wait, no it didn’t – it looked like total crap! Because it was! I can’t get across how awesome the concept is, but man, the graphics are crap, the camera angles are messy, it’s on rails, and it just left a bad taste in my mouth. Ugh.

The last of the shitty Kinect games was Sesame Street Kinect. Need I say more? I mean, fine, kiddy games are great, but did you really just spend the last ten minutes of a press conference demoing it with a seven year old on stage? Come on, Microsoft, you’re going to lose the press conference war with shit like this! 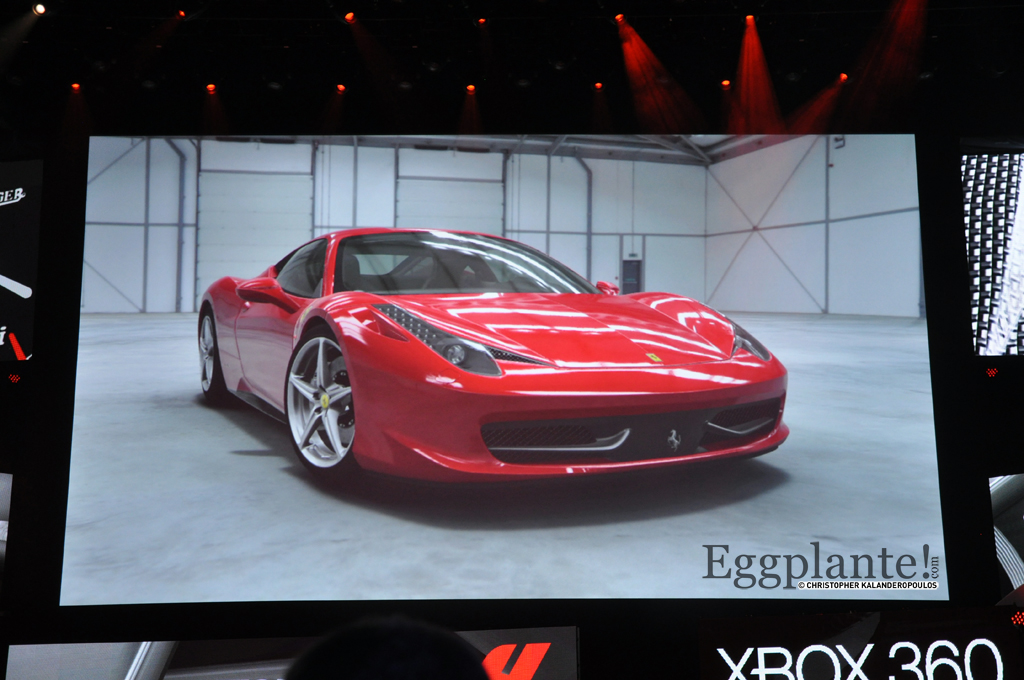 Okay, so on to the not-so-crappy Kinect titles, there was Kinect Sports: Season Two. Now, this sounds a lot worse than it actually looked. They showed off Football and Golf live on stage, and they were both basic, but they looked pretty incredible for what you might assume are very casual games. Think about Wii Sports functionality but looking amazing, not, well, not like Wii Sports.

Dance Central 2 was also announced, and that game is impressive: double body tracking for multiplayer at the speeds that these people are moving and with such precision? Go Harmonix!

Sadly, there was no Splinter Cell announcement here, but that doesn’t mean there wasn’t a massive title teased….

The moment I heard those three words, I knew instinctively what it was: Halo 4. And it starts right where Halo 3 left off. The teaser was bone chilling. There was this incredible sense of urgency and an emotional response that I’ve never felt in a game. John needs to wake up. He needs to get out and fight. If not, they die. I’ve watched this trailer about five times and it gets me every time. It’s beautiful and heart wrenching. And I’m in love with Halo all over again. Even though I never stopped.

This game was also announced as the beginning of a new trilogy, which means we have officially confirmed Halo 4, 5, and 6. Putting that purchase of the Halo IP to good use, Microsoft!

So, the question remains: how well did my predictions turn out? Okay, so there was no portable XBOX, but we all really knew that wasn’t going to happen. However, I did guess that Halo: Anniversary was coming, alongside a quick teaser for the new instalment in the series. I got the threequel right, whereby Modern Warfare 3, Gears of War 3, and Mass Effect 3 all happened at the show – I kind of ticked them off as I went along. Good going, Christopher. Kinect, Kinect, Kinect also happened, from core games to casual ones. I can see this really helping Kinect owners getting excited about their accessory purchase again, and it really makes sense considering they dropped the price of a Wii on an accessory for another console, so Microsoft needs to make it worth it somehow!

So I was wrong about Splinter Cell, but I said it was a long shot as it was, and it was more of a pipe dream for me anyways. But seriously, this is the year of Halo, not Splinter Cell. Let’s leave that for 2012.

We’re off to Sony’s Press Conference to report back on all the NGP and Uncharted 3 madness. Stay tuned!