You see that door on the Wii U? The little one that we’ve never actually seen open? Okay, don’t have a clue what I’m talking about? 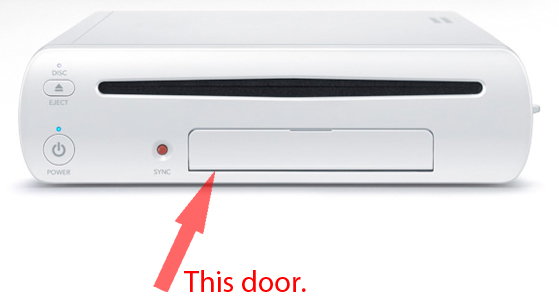 Beneath that door on the Wii lies the Sync button as well as the SD card slot for saving games. I’m pretty convinced no one ever uses it, but nevertheless, Nintendo has said that it would be present on the Wii’s successor. Fine.

But why is the sync button on the outside of that door now? Sure, it might be because the new controller needs to be synced more often for whatever reason. But I have a more radical theory – one that would be absolutely incredible should it pan out.

You see, there used to be this thing called the Super Game Boy, and then the Game Boy Player, for Super Nintendo and GameCube, respectively. They allowed you to play Game Boy games on the big screen very simply with the same controller you would use for the console itself. It was a very elegant solution, expanded the use of the console, and probably even sold some portable games to people without the handheld.

Until the Wii U comes out, there is no way to do something similar with DS and 3DS games because there has only ever been one screen – the TV – and even if both screens were displayed on the TV (size certainly wouldn’t be an issue), the bottom would somehow need to react to touch, which just simply isn’t possible.

You probably see where I’m going with this. Beneath that little door lies not only an SD card slot, but also a 3DS/DS slot.

I have it on official word from Nintendo that this will in fact be a feature touted at E3 2012.*

Here’s the logic behind it: The Wii U controller has a touch-screen, not to mention the exact control scheme – a slide pad and four buttons – as well as about the same size ratio for the top and bottom screen (don’t forget, the distance you’re holding it from your face factors into it, so it would be roughly the same).

Also, the feature would further validate (not to mention spur sales of) Nintendo’s re-release of classic games like Ocarina of Time and Starfox 64, not to mention Super Mario 64 DS and the others. It would also instantly increase the Wii U’s library from a couple dozen games at launch to include the thousand or so DS and 3DS games already out there.

Now, there is also the possibility for 3D to work on the TV screen if the player has a 3D television, which would in effect make the Wii U the first portable, non-portable 3D game console. Hell, even if you couldn’t knock 3D out of this thing, it would no doubt still be a huge feature that the company must have thought up by now. They’re geniuses. Trust me, they’ve thought of this.

Interestingly, it would probably cost a heck of a lot to put this in, right? Actually, probably not. The expense of the 3DS is not due to the cartridge reader, but rather the battery, backlit screens, and of course the active 3D shutter over the screen. You don’t need any of those things, nor a processor, buttons, case, or fancy packaging for this. It’s literally just a slot that would be wired to take advantage of the Wii U’s processor and memory for running the game in what would likely be an official emulator of sorts. It might add to the production cost of the unit by a few bucks (at the most), but Nintendo is sure to sell additional games for the console, or even encourage people to buy a 3DS just to take their games with them once they see just how great the games are.

There has also been word from Nintendo that the Wii U was inspired by the DS. Not so unbelievable considering both are from the same minds at the company, but the fact that they’ve come out and said it doesn’t hurt the case for this theory.

And last but not least, there is more than enough room in that little door for an SD slot and 3DS slot side by side. The door on the Wii U is about 8.5cm (3.34″), which is just shy of a full inch larger than the door on the Wii. With the sync button gone from behind there, what else could be there lurking? Hmmmm….

So that’s it for now. Another E3 prediction of sorts, although this one was thought up almost entirely in my head. Okay, so entirely in my head. But either way, we all stand to gain with such an incredible feature. Let’s not forget, Sony is kind of doing this with some games on the PS3 and Vita, so it would be great for Nintendo to make this native support on their latest and greatest.