The Twisted Metal series never really hooked me. Of course, I’ve played a couple of the games, but was never one of those die-hard fans that Twisted Metal managed to gain quite a few of. In a lot of places, this game has an almost cult-like following, if only because there hasn’t been a Twisted Metal game since 2005, and that was for the PSP. Going back to the last console version of the game will take you back over a decade.

So Sony (and David Jaffe) has thought it fitting, and I agree, to release Twisted Metal for the PlayStation 3. There isn’t a number suffixing the title, which indicates it might be a bit of a reboot for the series, but believe me, that isn’t the only thing tipping me off that this is a brand new game. Can you say helicop… actually, I’ve already said too much.

Let me start by saying this game is what I’d like to call “beautiful chaos”. It is one of those games where the developers have put extra thought and care into making the destruction of the world as pretty, if not prettier, than the world itself. I’ll get into that a bit more later, but just know that this game is gorgeous.

Twisted Metal doesn’t skimp on variety, either. This game almost feels like Gran Turismo 5 whereby they both look gorgeous and manage to feature a ton of variety in their vehicles. While Twisted Metal doesn’t have the one-thousand-plus cars that you’ll find in GT5, there is a ton of variety both on the road, and in the air. Yes, for this version of Jaffe’s baby, in addition to the ridiculously awesome death-on-wheels vehicles, you’ve got things like a helicopter, a vehicle that closely resembles the ECTO-1 from Ghostbusters (!), and, well, a tank with a car strapped to the top. Yes, you heard that correctly:

A tank. With a car. Strapped. To the top.

One thing I didn’t mention about that helicopter (got caught up in the whole tank with a car thing) is that its probably one of the most normal looking vehicles in the game, until you pick up a car with it and drop it to the ground from a few hundred feet up. Then, not so normal. See that’s just the thing about this game. It’s crazy! In the same way Burnout went crazy with racing games and Saints Row went nuts with open world sandboxes, Twisted Metal has reinvented, well, itself, and created a massive disgusting over-the-top weird wrecking ball of a masterpiece. It’s bizarre in the best of ways.

When you’ve got vehicles like a massive armoured police SUV, you might expect it to be a bit hard to maneuver. Actually, pretty much everything in Twisted Metal handles like butter. The controls aren’t perfect, per se, but they’re good enough to keep you playing. Not necessarily frustrating, but not the best ever. But hey, the game lets you drive a tank with a freaking car strapped …. okay, okay, you get it.

The cutscenes in the game are live-action, and they’re pretty well produced. They remind me of the older Command and Conquer PC titles, which is a nice throwback for me personally, even though it wasn’t intentional, I don’t think. The style of the cutscenes isn’t for me, but they’ve got that Death Race, Grindhouse kind of feel which, if you dig, you’ll love these ones.

Truthfully, the storyline kind of blows. I mean, there are three characters you can follow through to the end of the game, but traditionalists aren’t going to like the fact that you’re no longer forced into driving a specific car depending on your character. For me, it doesn’t really matter since I’m not one of those traditionalists, but if you are, and Twisted Metal is your thing, be prepared for at least a couple of changes.

The multiplayer is pretty robust for what might seem like a chaotic throw-it-all-together game, albeit there is no online co-op for the storyline. The multiplayer matchmaking isn’t nearly up to par with what I think is the gold standard: Halo Reach. However, it works, and there are some pretty neat modes to choose from, in addition to your standard Deathmatch. My favourite is tossing your enemy’s chieftain into a missile launcher and blasting the hell out of their statue until it crashes to the ground in a flaming puddle of madness. Okay, some of that was hyperbole, but it really happens, try it!

All in all, Twisted Metal is a great game. The storyline could use some work, but otherwise, it is a truly fun mess of a game. And I mean “mess” in the best way possible. It’s a really great game. Actually, it’s really a great games is what I should be saying, because when you buy Twisted Metal, you get a code for a download of Twisted Metal Black, which is widely regarded as the best Twisted Metal game ever created. Of all the pack-ins, that’s the one you want. Good job on this re-imagining of a classic franchise, Sony. Hope to see more from this one! 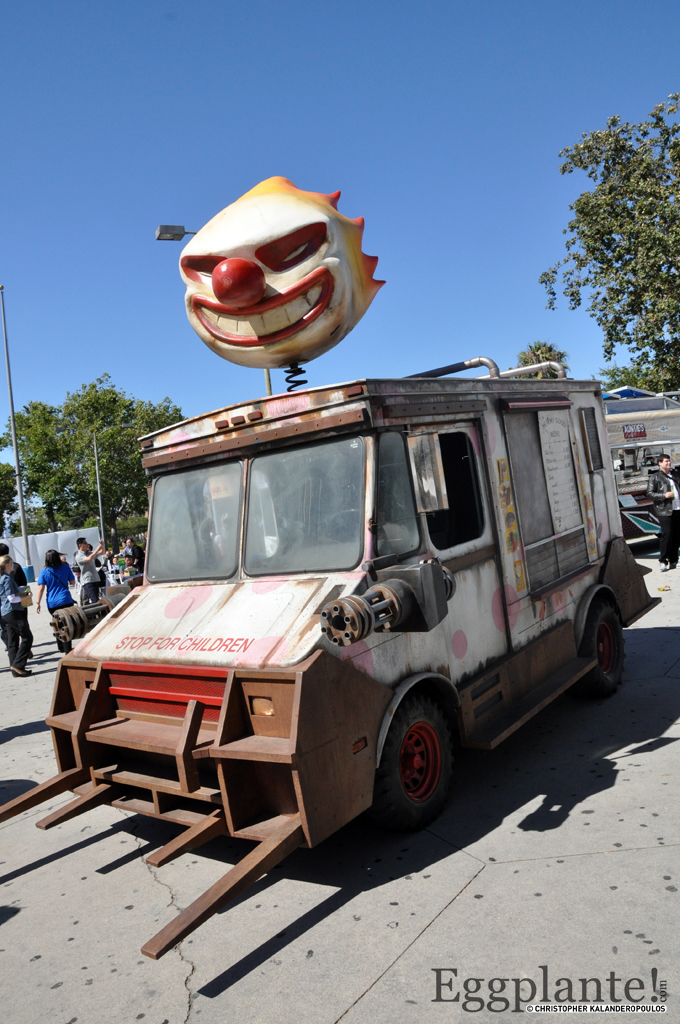