It’s hard to believe that Assassin’s Creed II was announced at E3 2009, the first E3 we ever attended, and since then, there have been two other games (Brotherhood and Revelations, of course), but it’s taken three years to get to the actual third instalment of the series. Well, Assassin’s Creed III is nearly upon us, and Ubisoft has clearly been very cautious about the franchise’s major next step, but let’s take a look at the game’s first massive trailer. It seems to be a theme today as Halo 4’s announcement also released today, so let’s take a look at the second major announcement for this 5th day of March, 2012.

First off, the game looks incredible. We’re told that the trailer is running in-engine, which means you can expect the game to look almost this good. Note, that “in-engine” doesn’t mean that the footage is in-game, so Ubisoft might be taking advantage of some extra hardware to pre-render this stuff, but the game is expected to look fantastic either way.

A lot of the environment has changed in ACIII. Since we no longer have the massive buildings people had in Ancient Rome, there seems to be a lot more gameplay taking place at night to make it easier to act stealthily. There are no bricked behemoths in this game, so you’ll be using trees and rocks as your cover.

With no buildings to climb, that means you’re also using trees as your height mechanism, and it seems like they’ll finally be replacing the wagon full of hay mechanic as well. The tree-climbing and jumping is incredibly fluid and looks like yet another mechanic Ubisoft has created and will likely nail in function when the game is released. It’s beautiful and artistic, which for such a gruesome game (think muskets and massive cannons), is very interesting.

Apparently, there will be a fur trading mechanic in addition to the game’s main currency which is said to be pretty robust. Depending on how many shots you use to kill an animal will effect its value in the fur market. Fewer shots obviously equates to more money given that the pelt has taken less damage and has fewer holes in it. Just don’t expect PETA to stay quiet about this one for very long.

There will also be the ability to take place in larger battles, something we haven’t really seen in the Assassin’s Creed universe. The trailer hints that there will be large skirmishes as you might expect from the late-1700s, so get ready for yet another new mechanic you haven’t seen yet. 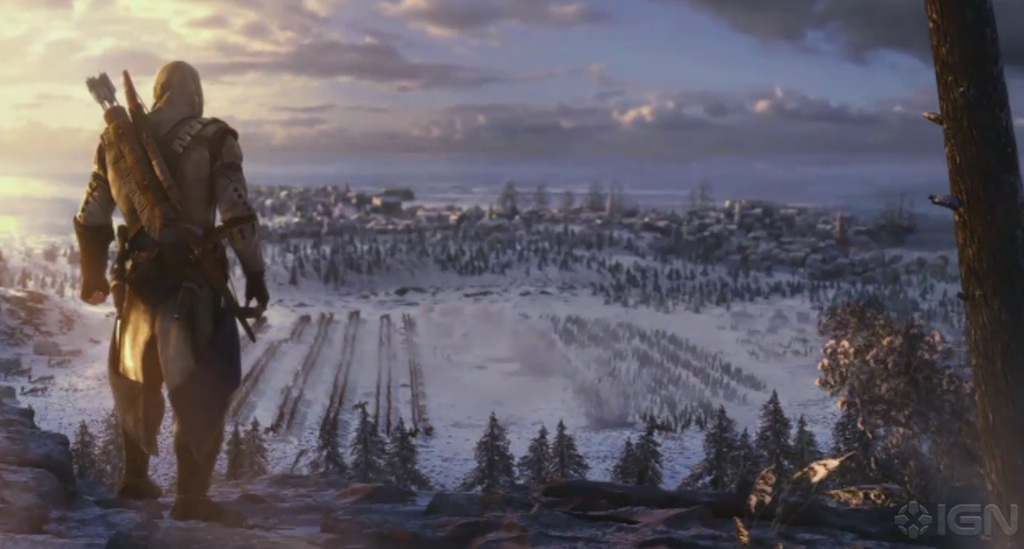 Multiplayer wasn’t touched upon, but given Ubisoft’s desire to always be releasing new art, trailers, and documentaries prior to a game’s launch, you can expect to hear something about it in the not too distant future.

For anyone interested, head on over to IGN for a great segment called “Rewind Theatre” where some editors discuss the trailer and all its intricacies in greater detail and really delve into the past story lines and themes to guess as to what ACIII really has in store for us.