It seems like when one developer announces the Collector’s Edition for their latest game, others see how much attention is garnered and follow suit. 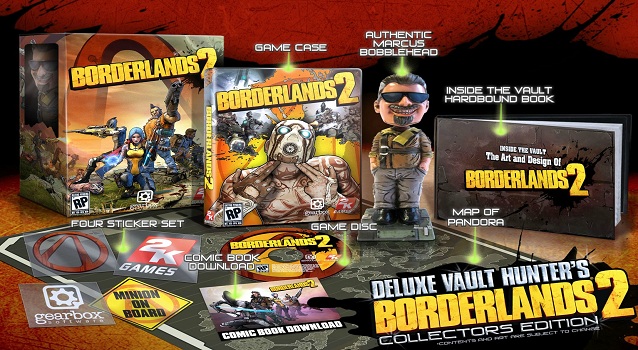 For a penny under a hundred bucks, the Deluxe Hunters Collector’s Edition includes the following (in addition to the game, of course):

Now, if that wasn’t enough (are you crazy?!), there is also the Ultimate Loot Chest Limited Edition for just $149, in which you get everything from the Deluxe Hunters Collector’s Edition, plus:

Now, with everything that you get in the $149 Ultimate Loot Chest Limited Edition version of the game, the deal is one of the best we’ve seen in a very long time. It’s hard to imagine that the extras will be of very high quality since there are so many of them, but we haven’t seen too many horrible limited edition extras lately, so here’s hoping this one doesn’t buck the trend. Hell, even if the quality sucks, who wouldn’t want that Red Chest on their shelf?

Borderlands 2 ships this September, but you can expect to hear more at E3 in a couple of weeks.