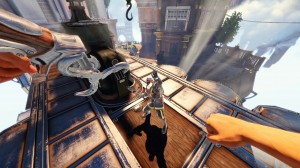 According to Ken Levine, creative director at Irrational Games, his latest title, BioShock Infinite, will not include any sort of multiplayer component.

This is contrary to a couple of reports this past August that suggested more than one style of multiplayer mode was in development. These were just rumours – and debunked, now, it seems – as neither Levine nor Irrational ever announced any multiplayer features for Infinite.

We first got a glimpse of BioShock Infinite in the late part of 2010 but have heard surprisingly little since Levine took the stage at Sony’s E3 Press Conference in 2011 to show off more of the game. At that same event, he also announced a version of BioShock for the PlayStation Vita (then the NGP, or Next Generation Portable), which we have also yet to hear more details on.

For those unaware, BioShock Infinite eschews the classic locations of the original two games in favour of a steampunk-inspired floating city called Columbia. Despite the game’s Infinite moniker, the title is actually going to be a limited campaign as opposed to an open-world game like Grand Theft Auto or The Elder Scrolls V: Skyrim.