The storyline of Legacy begins with an homage to the beginning and end of the first trilogy, with Jeremy Renner’s character, Aaron Cross, in deep waters in Alaska. We find out early on that this is a training camp and are treated to some stunning scenes of mountain-traversal, death-defying jumps across small canyons, and fending off werewolves with flames. It sets a beautiful and surreal tone to the movie that reminded us of Cliffhanger.

Unfortunately, within minutes, the movie devolves into a manhunt where Cross is being hunted by his own people (yes, we’ve been here before). The movie jumps around quite a bit in the beginning, though not with flashbacks (although they do make their triumphant return later in the film) and while it’s easy to follow, we feel like it would have been far better to have everything edited together cohesively.

We spend about a half hour learning about the skills Cross has, even though they seem to be the same that Bourne had in the first few films. We see Aaron climbing trees and free-running and using a rifle with utmost precision to take out a spy drone. All things we’ve seen before in one way or another. There’s also an odd subplot about medication and genetic imprinting or modification or physical something-or-other. We didn’t care to understand because it went over our heads. Not because we’re dumb, but because it seemed unnecessary.

But Jason Bourne managed to do it with a sort of MacGyver-like wit and resourcefulness. There’s some of that in Legacy, but some things just seem so obvious and redundant. Like using a fire extinguisher as a weapon. How many films have we seen that done in before?

Characters in The Bourne Legacy are surprisingly one-dimensional considering the kinds of roles they play. Where Bourne was a much more analytical and deliberate creature, Aaron Cross is actually rather forgettable in the grand scheme of things. He doesn’t do things that seem very Bourne-like, and while we know he isn’t Bourne, he is supposed to be an upgrade from the Treadstone program. More like an upgrade from Windows XP to Vista, we think.

The rehashing of characters certainly doesn’t help to bring any new faces to the game, outside of Edward Norton, but even his performance seems sub-par. When The Bourne Ultimatum reintroduced some scenes from Supremacy into its plot, it was to retread some steps that made it much easier to follow the new story. It was an interesting method of connecting the movies that made them more impactful when watched as a trilogy. However, in Legacy, the rehashing of some characters (a lot of them, actually), seems to do a disservice to the film itself. Some characters like Ezra Kramer and Noah Vosen are brought back and their fates changed somewhat to the way we saw Ultimatum finally conclude.

We like that there are some homages to the first three films in the Bourne series. However, there are a few issues with the fact that there are just so many. We counted nine major homages to the first three films, and we’re not talking about short lines of dialogue or quick flashback sequences. We’re talking about being in a dingy hotel room with a new female companion, that same female helping you change something about yourself (it was hair in the first movie; it’s genetics in this one), beginning the film in the water, and ending it with a sequence aboard a ship that is on the other side of the world. Oh, and the explosion of an abandoned home in the middle of a forest seems a bit familiar.

Car chases are a staple of the Bourne franchise, and Legacy tried something new by bringing motorcycles into the mix (they’ve been done before in Bourne, but not to this extent). However, these chase scenes devolved so quickly into how much damage one person could do while getting away from his pursuers and ended up being entirely too long.

Perhaps the most interesting thing about a Bourne film is the connection Bourne is trying to find to himself. He doesn’t remember anything except his physical skills, doesn’t understand where he is or who he’s fighting (or why he’s fighting them), but we have a hell of a time watching him figure it all out. In Legacy, it seems as if, within the first twenty minutes of a murder attempt on Cross, he is completely aware of who he’s fighting and how he can overcome them. There’s no real character development or watching Cross evolve from who he is into something new. By the conclusion of Legacy, Aaron Cross is the same Aaron Cross we’re introduced to at the start of the film. 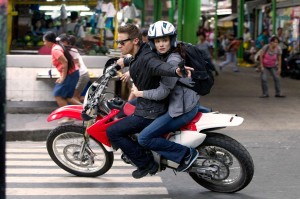 We’re a bit peeved that the writers made it so easy to continue a franchise long after what should have been the end of the Bourne franchise. We’re subtly introduced to other programs not dissimilar to Treadstone and Black Briar that leave so many doors open for future films bearing the Bourne name but without any Bourne.

As the audiophiles that we are, we must touch upon the audio in the film and will say that it is excellent. However (yes, you saw a “however” coming), that is because most of the score and track list is taken from the original trilogy, much like a few characters and plot lines. There seems to be a theme here.

If you want to watch the Bourne series of films, please go take a look at a Blu-ray of the original trilogy. They’ve got some of the best special features of any film we’ve seen, even a decade later.

The first three movies in the Bourne trilogy are some of our favourite, if not our favourite, movies of all time. But we’re saddened by the fact that The Bourne Legacy calls itself a Bourne film. Jeremy Renner makes a convincing spy, but he isn’t a decent one in this context. The film has some interesting plot lines and a few memorable characters, but at the end of the day, it doesn’t deliver. Much like other rehashes of successful trilogies (we’re looking at you, Indiana Jones and the Kingdom of the Crystal Skull), we’d prefer to think that The Bourne Legacy never happened.