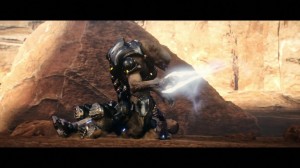 We’ve finally made it to the end of season one of Spartan Ops for Halo 4. After all the ammo casings, plasma grenades, and annoying-ass Prometheans, Spartan Ops has offered gamers a new perspective on life in the UNSC. This is not entirely new for the franchise – Bungie released Halo 3: ODST in 2009 – however, Spartan Ops was a conscious addition to the franchise, whereas ODST was a solution to a lull between games. The question that must be asked though, has it hurt or helped 343?

Spartan Ops can be described as the meeting between a TV drama and a video game. Each week’s release has a short five minute video to act as the backdrop for the five missions you are about to partake in. This formula is interesting, though quite lacking. For every five minutes of cinematic experience, you play about an hour and a half of gameplay. This would be a little more acceptable if the two were cohesive in some way, but they’re simply not. All the components for a full composition are present but lack a binding agent to bring it all together. It’s like going to a bakery for cookies, and the baker giving you the dough and the chocolate chips, but not the final product. We’re not saying that Spartan Ops is half-baked (oh come on, we had to!), but it leaves more to be desired. We love the films and the gameplay is fun and inviting, but they needed to meld together for a complete experience. 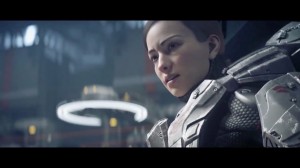 Now, you might be confused, as we’ve previously have stated how much we love Spartan Ops and are now throwing criticism around like pies in a Three Stooges routine (we like dessert analogies). We haven’t changed our opinion – Spartan Ops is still amazing, and we hope to see more from it as there is a ton of potential in it – but that doesn’t mean there aren’t things that need to be improved upon. Had we not watched all the Spartan Ops videos in conjunction with their corresponding levels, we would have labeled Spartan Ops as a fun shooter experience with an interesting take on the universe we’ve come to know and love. With that being said, we did watch those amazing cinematic episodes with each week’s levels, and it’s because of that we feel the need to throw a bit of criticism. 343 Industries has proven it can write an interesting and engaging narrative with cinematic almost Hollywood-esque cutscenes.

Calling these cinematic bits cutscenes is almost a disservice to what they really are. They are scenes in the first act of a play that detail the social and political workings of the UNSC. Characters you hear about in the game, Spartan Sarah Palmer, Spartan Thorne, the AI Roland, Captain Lasky, and the others, are majorly developed in these scenes. The major conflict in the first act, at a glance, is the Spartans of the UNSC Infinity versus the Covenant and Prometheans under the leadership of the Didact’s Hand, Jul ’Mdama. There are other interpersonal conflicts as well, most notably between Sarah Palmer and Catherine Halsey. These levels of conflict, not only with the traditional Halo enemies, but also within the UNSC, gives a level of storytelling not normally found in shooter titles.

The very last scene of this act might be the most ominous for what is to come in the Haloverse. Beware some spoilers ahead, so tread lightly. 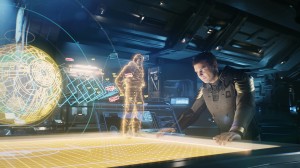 It is revealed by the Librarian that there is a piece of Forerunner technology called the Janus Key that gives the precise location, in real time, of all Forerunner installations. The key comes in two parts and the Librarian gives them to Halsey to let humanity claim the Mantle of Responsibility left by her people (the equivalent of letting humanity jump to the forefront of technological superiority). Halsey, long believed to be the biggest bitch in the UNSC, gives one of the keys to Spartan Thorne, as ‘Mdama snatches the other half, and Halsey is shot by Spartan Palmer. In an event that could be the worst misunderstanding in galactic history, Halsey believes the UNSC has ordered her death and strikes a deal with ‘Mdama for revenge in exchange for the key.

This cliffhanger of an ending leaves a lot to cover for the next season, since the fate of the galaxy hangs in the balance (once again). Humanity’s supremacy in the galaxy is challenged, as ‘Mdama’s forces move toward usurping the Mantle of Responsibility for their own, and subjugate humanity and the galaxy. With Halsey on their side and feeling vengeful, will the creator of Cortana and the Spartan Program lead the Covenant to a new height of power? Can the UNSC Infinity, and her crew claim the other half of the Janus Key, and get Halsey back to their side? These are questions buzzing in our heads, as we wait with bated breath for season two of Spartan Ops.