This is a sister review. Take a look at our review of the R.A.T.M Wireless Mobile Gaming Mouse, too!

We’ve had an on-again, off-again relationship with Mad Catz. They’re probably the most well-known 3rd-party video game accessory manufacturer on the planet, and that’s good and bad.

On the one hand, 3rd-party products are almost never as good as the official ones, but on the other hand, they tend to be cheaper and offer different features. Luckily, Mad Catz has managed to produce more useful products than not, and this trend is continuing onward and upward with their two new GameSmart-branded computer mice.

Both the R.A.T.M and M.O.U.S.9 are Bluetooth-enabled pointing devices, each with its own use.

The R.A.T.M is the company’s mobile offering while the M.O.U.S.9 is aimed at more traditional desktop users. Both devices come in an absolutely stellar looking jewel-moulded case. The case is made of a very rigid plastic that has a very quality feel to it. It sets the stage for the quality product you’re about to pull out of it.

The M.O.U.S.9 is probably one of the best looking computer devices we’ve ever laid our eyes on. It’s rugged in a way that is unobtrusive, svelte in a way that is bold, and feels amazing to hold. It comes in the same four options as its mobile counterpart, and we tested the (gorgeous) matte black model.

Unlike the glossy black variety, the matte black mouse attracts far fewer fingerprints and has a much smoother feeling in the hand. In addition to being a larger mouse, the M.O.U.S.9 is targeted at an entirely different demographic than the R.A.T.M. While the R.A.T.M has a mighty 6400 dpi sensor, the M.O.U.S.9 uses just a 990 dpi variety. The reason for this is its ability to track on any surface, including glass, which could be a bigger feature than a lot of people realize. We like it because it means it’ll work on almost any surface, and we had no issues with it working in any environment.

The thumb rest on the mouse is very large and extremely comfortable. It seems such a silly thing to be commenting on, really, but when a mouse is designed with comfort and usability in mind, they have to be brought to attention. 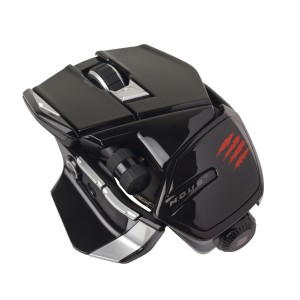 The M.O.U.S.9 has a wealth of control options, including a scroll wheel with inward and side clicking, a thumb scroll, dual thumb buttons, and two left-click buttons, one main that we’re all used to, and one secondary one.

We use a variety of mice in our day-to-day computer usage, including trackpads, regular mice, and gaming-specific varieties. The M.O.U.S.9 has actually become our everyday use mouse above our current one because of just how comfortable it is. Like the , it comes with a nano-dongle that hides away in its underside so that you can keep track of all its parts.

While we recommended the R.A.T.M wireless mobile gaming mouse for anyone who has portable gaming needs, we feel even more strongly about the M.O.U.S.9 and its ability to function as a total workhouse mouse in the work and office environment. It will, of course, still handle any game you throw at it, though if you’re a serious (and picky) gamer, you’ll probably want something with a better tracking resolution.

If not, however, the M.O.U.S.9 is, without a doubt, the best desktop mouse we’ve ever used.