Universal has openly admitted that they don’t have as many blockbuster movie properties as their competitors. This could be why the studio seems to have such bad sequelitis, milking the moneymaking properties they do have, ad nauseum. Nowhere is this more evident however than in the Fast and Furious movies, which have now reached their landmark sixth installment, simply titled, Fast and Furious 6, and yes, a seventh is on the way.

What is the movie about? Well, does it really matter anymore? The series has moved gradually further and further away from its original street racing premise, now simply serving generic action movies with a heavy vehicle component. Of course, the familiar ensemble cast, shallow and wooden as their characters are, remains appealing enough, and the action in Fast 6, for what it’s worth, is enjoyable enough to be consistently entertaining throughout the movie. As much as 2009’s Fast & Furious and 2011’s Fast Five managed to exceed expectations however, Fast 6 comes off as just feeling like more of the same. It’s evident that the franchise is starting to get really tired.

Well, in any case, what asinine plot do we have this time? Well, Letty Ortiz (Michelle Rodriguez) is apparently back from the dead, except she’s working for the bad guys now. This time around, the bad guys are world-class ‘vehicular warfare’ experts led by ex-SAS British villain, Owen Shaw (Luke Evans). These guys are starting to become a big problem for returning DSS agent, Luke Hobbs (Dwayne Johnson). Desperate, Hobbs turns to the series’ other star player, Dom Toretto (Vin Diesel), and reunites Dom’s crew to take Shaw and his racers down before they steal an EMP weapon, or something like that.

Frankly, if you’re going to see Fast 6, you’re not going for the story. The outrageous retcon that puts Michelle Rodriguez back into the franchise feels very cheap and forced, and likewise, the villains are stock and dull. The group of heroes, all returning from Fast Five more or less, are at least given their own little bits to shine throughout the movie, but the huge ensemble cast does get in the way at times. There’s too many characters at this point, and that makes Fast 6 often feel unfocused. On top of that, if you haven’t seen most of the other movies in the series, you’re probably going to be frequently lost, as Fast 6 references their events rather frequently.

On this note, character-shuffling is quite noticeable at times amongst the good guys. Despite being the main character in the first two movies, Paul Walker’s Brian O’Conner is shoved into the background quite frequently, in favour of giving more screentime to the series’ actual current stars, Vin Diesel and Dwayne Johnson. This is especially surprising when you consider that he’s now had a child with Dom’s sister, Mia, yet again played by Jordana Brewster, who has little more than an extended cameo in this movie, surely to the chagrin of her fans. There is one callback subplot to Fast & Furious for Brian’s character around the middle portion of Fast 6, but that’s virtually the only time that Brian does anything with actual bearing on the story, and even then, it’s heavily contrived.

Again though, what really counts is the action, which is still good enough in Fast 6, but even considering the often ludicrous action set pieces of Fast Five, Fast 6 strains physics and plausibility to breaking point like never before! Yes, the safe-dragging climax of Fast Five was completely ridiculous and unrealistic, but even that seems plausible when you see the genuine shark-jumping moments of Fast 6, particularly in the much-advertised highway scene involving a tank. That’s not even the movie’s actual climax either, which you can enjoy on what is by far the world’s longest runway!

So, yes, definitely leave your brain at the door for Fast 6, because trying to question this movie’s grasp of reality will only cause you to hurt yourself. To be fair however, if you can suspend your disbelief, the action isn’t bad per se, even if it is laughably implausible. The car chase scenes are what you would expect from the series, but the best action scenes are actually the hand-to-hand fights. Yes, the car scenes are very well-choreographed and have clearly had loads of effort put into them, but the fight choreography is somehow even better! It’s especially great to see MMA fighter, Gina Carano in action as Hobbs’ new partner, Riley, and as the trailers teased, she mixes it up with Michelle Rodriguez more than once!

The exotic sets of Fast Five have mainly been replaced with simpler UK backdrops, which are oddly unpopulated in many cases to boot. The climax moves to Spain, but even then, everything is so simple-looking. The movie even casually tosses in a street race around the middle, as if to remind audiences of what this series started out as, and even that lacks style and flair compared to the series’ prior entries. Like I said, it’s very clear that this series is starting to run out of gas, if you’ll forgive the pun. 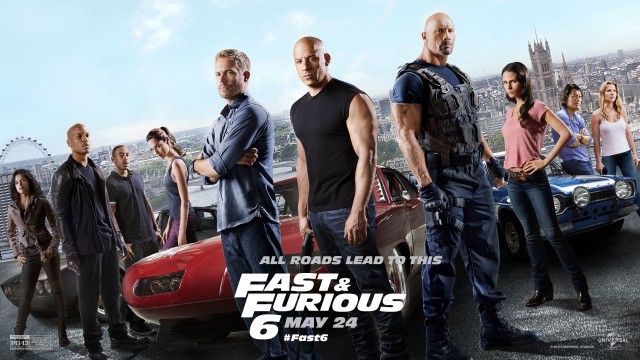 Fast 6 is ultimately just more of the same. It’s not as exciting and it’s not as engaging as the stronger past couple of movies, and it really feels like the writers are straining to keep the series fresh and relevant at this point. Despite Fast 6 originally being planned as the finale for these movies, Universal naturally decided that they wanted to do a Fast 7, and as such, Fast 6 ends in another bloody annoying cliffhanger! Well, to be fair, its tease at least demonstrates that Fast 7 will have a much better villain (no spoilers here, of course), as well as finally bringing the series’ timeline past its third movie, The Fast and the Furious: Tokyo Drift, which took place after the past three movies.

Really though, Universal needs to start wrapping this franchise up, even if it’s still inexplicably making a lot of money for them. There may be just enough milk left in this cow to get them through Fast 7, but unless that movie really juices up the series’ creative spark, a la Fast & Furious, this series is really going to start overstaying its welcome. Of course, if you’re a fan of this franchise, and you just want more of the same, then Fast 6 will entertain you nicely. Likewise, if you don’t care for these movies, then move along, because Fast 6 will offer you no reason to change your stance on the franchise.

There’s only so many ways that one can fashion ridiculous car stunts, and if Fast 6 is any indication, Universal has almost reached the bottom of their bag of tricks!