There are few games that allow you to feel the thrill and power of having an arsenal of over the top weaponry like Saints Row does. However, this was an entirely virtual experience, until Deep Silver and Volition announced the “Super Dangerous Wub Wub” edition of Saints Row IV. This super special awesome pack of goodies is set to blow our mind and ears with Saints swag.

“Super Dangerous Wub Wub” edition of Saints Row IV gives gamers a real life dubstep cannon that’s powered with some of the most ass-exploding dubstep that could be created (disclaimer: the amount of “assplosion” will vary from person to person) , and is equipped with a laser sight to allow for pinpoint accuracy in your dance moves. The special edition also comes with a Dubstep Doomsday Button and an 8-inch Johnny Gat statue. That, however, is just the physical gifts that Deep Silver and Volition want to give away to fans of Saints Row.

In-game goodies include three pieces of DLC; the Screaming Eagle VTOL, Uncle Sam uniform and ‘Merica gun. The Screaming Eagle is a patriotic paint job version of the VTOLs from Saints Row the Third, and there has been no indication on whether or not that the VTOL has any enhanced stats from it’s less ‘Merican cousins. Then the Uncle Sam uniform is just a costume for your character if you want to see America kick alien ass, or at least punch it in their extraterrestrial dick. Finally the ‘Merica gun takes all the guns it could find in your average American neighborhood and packed them into one weapon. All these DLCs are part of the preorder benefit for a regular copy of the game.

While the whole world will be receiving generally the same game experience (some with ‘Merican upgrades), the price difference is huge as the a regular preorder is $59.99 and the “Super Dangerous Wub Wub” edition is $99.99. If you really think about it, it’s an extra $40 worth your very own dubstep gun? Probably not, but it’ll look great mounted on your wall over the fireplace. Saints Row IV comes out in America on August 20th and the rest of the world on August 23rd. 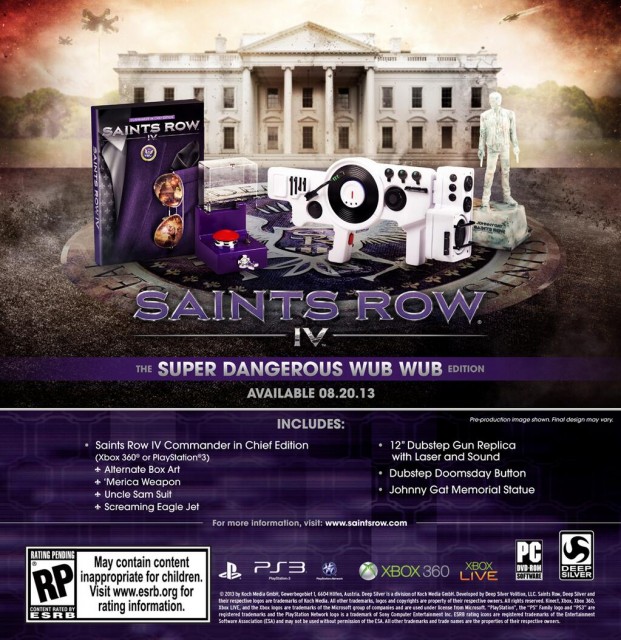