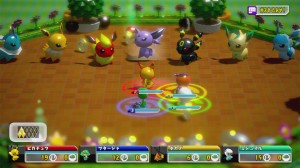 It was only a matter of time before some bright individual deduced the obvious potential connection between Pokemon and telepod technology. Now, it’s a reality!

Continuing the series that was pioneered on WiiWare and continued on 3DS, Pokemon Rumble U brings the toy-battling spin-off to the Wii U eShop! It’s also coming as soon as next month!

Sold at Gamestop stores, for $3.99 each, will be ‘concealed capsules’ of new collectible Pokemon figurines. Apparently, 18 Pokemon will be available in the capsules, said to include Pikachu, Eevee, Victini, Deoxys, and Genesect so far. Bulbasaur, Riolu, Torchic, and Piplup are apparently also included, according to promo footage.

When you scan these special figurines onto the Wii U Gamepad, a la Skylanders, you unlock bolstered additions to your Pokemon roster for use in the game. Players will also have the ability to further power up the scanned Pokemon with in-game coins, and the ability to give them custom traits and abilities.

Pokemon Rumble U is said to involve a quest to return to the ‘Pokemon Toy Shop’, passing through a variety of locations. These include all-new locales, such as Sparkly Playland, Mysterious Forest and Blue Sky Park. The game also promises co-op for up to four players, so that they can team up and defeat opponents together, or so it’s claimed. Exact co-op details are unfortunately muddy at best for now.

Pokemon Rumble U will cost $17.99 when it comes exclusively to the Wii U eShop on August 29th of this year. It may not be the ambitious and original three-dimensional Pokemon adventure that fans are demanding for Wii U, but right now, it will certainly prove to be an addictive start!

As usual, Eggplante will be catching all of your Pokemon news, as it appears before us!