Well, Deep Silver has done it. Somehow, they have made the maniacally insane Saints Row: The Third seem tame in comparison to their upcoming Saints Row IV, launching in a couple of weeks.

Previously, Saints Row IV was confirmed to have multiple special editions. A ‘Commander-in-Chief Edition’ is given free to anyone who pre-orders the game, which offers an additional weapon, vehicle and costume, on top of numerous downloadable cosmetic bonuses for your character. This is the only special edition package releasing for PC as well. The others can only be pre-ordered for Xbox 360 or PlayStation 3.

Anyway, secondly, a ‘Super Dangerous WUB WUB Collector’s Edition’ can be pre-ordered for the added cost of $99.99, containing the Commander-in-Chief edition of Saints Row IV, as well as a 12” Dubstep Gun replica, 8” Johnny Gat Memorial Statue, and a ‘pocket-sized Doomsday Button’. Nothing too unexpected as far as triple-A game productions in the West go, right, beyond the usual Saints Row weirdness? 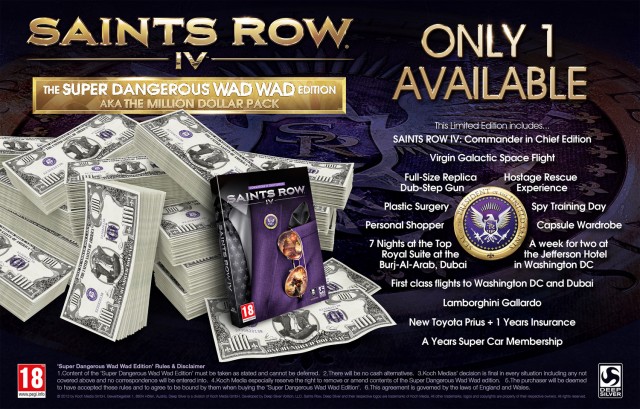 Third, things started to get over-the-top. Joining the likes of the most prestigious Halo and Call of Duty packages, it was then announced that a very limited run of ‘Emperor Zinyak Game of the Generation’ editions of Saints Row IV could be pre-ordered, and only online at that! This one includes everything in the Super Dangerous WUB WUB Collector’s Edition, but also comes with a light-up rotating display case with an individually-numbered plaque, and a protective pouch for said case. This runs you $129.99. Yikes!

Of course, if you’re balking at that, you haven’t seen anything yet! We didn’t believe it when we heard it, and in fact, we still don’t, but Deep Silver claims to be serious. Offered exclusively at European retailer, GAME, and only having one unit available exclusively at GAME, will be the ‘The Super Dangerous Wad Wad Edition’, or ‘The Million-Dollar Pack’. This literally costs in British pounds the equivalent of one million U.S. dollars. We’re not joking. You’d have to be the president of something yourself to afford that, or at least at peace with being in debt for the rest of your life!

So, what does this insane package offer, you may ask? Well, you’ll get the Commander-in-Chief Edition of Saints Row IV on your platform of choice (possibly only Xbox 360 and PlayStation 3, as with the other special editions), but not only that, you’ll get, are you ready for this?:

A full day of spy training, a trip to space via Virgin Galactic, a one-year membership in the E25 Super Car Club, a Lamborghini Gallardo (a really nice car, if you don’t know what that is), plastic surgery of your choice (seriously), a shopping spree with a personal shopper, seven nights for two at the Jefferson Hotel in Washington, a, “Hostage rescue experience” (whatever that entails), a new Toyota Prius (TWO cars?!), and a seven-night stay at the Top Royal Suite in the Burj-al-arab, a very swanky hotel in Dubai, because one awesome hotel stay isn’t enough, apparently.

Deep Silver also claims that anyone who is insane enough to pre-order this madness will have it delivered, “In true presidential style!”… We are at a loss for words.

So, hey, if you know any rich, eccentric British millionaires/billionaires that love Saints Row, maybe they would love the distinction of being among the only people in the world to pre-order what easily takes the world record for the most expensive, impractical and thoroughly ridiculous video game package ever offered in human history! You did it, Deep Silver. For whatever it’s worth, you did it. Nobody is going to top this!

In case you don’t have more money than God and His attorney, Saints Row IV’s far less expensive packages are currently available for pre-order at various retailers, while supplies last in the case of the Super Dangerous WUB WUB Collector’s Edition, and Emperor Zinyak Game of the Generation edition.

While Deep Silver is taking over publishing duties for the series’ bankrupt prior publisher, THQ, Saints Row IV is still being developed by the series’ usual studio, Volition Inc. It’s set to release in just a couple of weeks, on August 20th, for PC, Xbox 360 and PlayStation 3. We’ll have a review for the game up on Eggplante shortly after it launches.

But not for this package. It would have been the best review you’d ever read though, wouldn’t it?