Just as Universal finally set a release date for girl-power comedy follow-up, Pitch Perfect 2, Paramount and MGM have finally pegged a release for one of their own long anticipated comedy sequels, even if it saw a more modest theatrical intake. 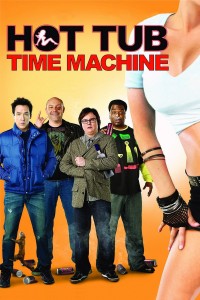 After spending much time in development, Hot Tub Time Machine 2 will finally be coming to theatres this Christmas Day, December 25th, 2014. It’s quite a bold move, releasing what is sure to be a raunchy adult comedy during the most beloved family time of the year! The movie will be sharing the date with Disney fairy tale twist, Into the Woods, and WWII survival drama, Unbroken at this point.

The original Hot Tub Time Machine turned a modest theatrical profit and was a huge cult success on DVD back in 2010, even being well-received by critics. The movie was meant to be a throwback to 1980’s R-rated comedies, with four loser protagonists entering a magical hot tub that sends them back to 1986. The three adult men appear as their younger selves, while the younger boy, who shouldn’t technically exist yet, is given a chance to be cool and live life to the fullest as himself.

The sequel’s plot is largely a secret, though it is confirmed that John Cusack will not be returning. He will be replaced by his son from the future, played by Parks & Recreation actor, Adam Scott, which is the only indication of where the sequel’s story may be headed. Craig Robinson, Clark Duke and Rob Corddry will all be returning to their lead roles however, with Chevy Chase also returning as the time-traveling hot tub’s supernatural repairman. Steve Pink will be returning to direct the sequel as well.

If you haven’t watched the original Hot Tub Time Machine, we highly recommend it as one of the best sleeper comedies in recent years. Hopefully the sequel will manage to recapture that same formula for success towards the end of this year.

If you have seen the original however, what kind of sequel do you hope to see in Hot Tub Time Machine 2? As usual, your comments are welcome below.

Eggplante will continue to provide updates on Hot Tub Time Machine 2, as they swirl to us.