The original Resident Evil‘s highly celebrated and viscerally terrifying GameCube remake, which has already seen a port to the Wii, is getting another revamp. This time, it will be headed to current platforms outside of the Nintendo pantheon, marking the first time that the remake will be available beyond Nintendo consoles. 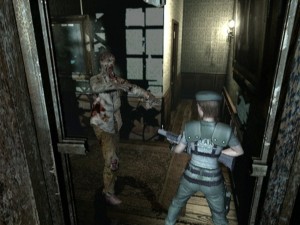 The new Resident Evil remaster is coming as a digital download game some time next year, and is planned for PC, Xbox 360, PlayStation 3, PlayStation 4, and Xbox One. All five versions will now feature Dolby 5.1 Surround Sound support, as well as the ability to choose between the old-fashioned ‘tank controls’, and some more modern controls that let you more freely move with your stick movements. The once-fixed camera is also being redone to be more dynamic and flexible, better moving along with players between locations.

The original Resident Evil involves a group of survivors from elite Raccoon City police force, S.T.A.R.S. getting trapped in Spencer Mansion, a vast estate that happens to be crawling with flesh-eating zombies and massive, ravenous mutant abominations. As Chris Redfield or Jill Valentine, players experience dual storylines as they attempt to get to the bottom of what’s going on at Spencer Mansion, and how it relates to the shady Umbrella Corporation.

Eggplante will continue to propagate your news and updates on the Resident Evil series.