Earlier this year, I declared Infamous: Second Son to be the best launch window exclusive for Sony’s next-gen PlayStation 4 in Eggplante’s review of the game. Now, developer, Sucker Punch has decided to expand the experience with a standalone expansion, Infamous: First Light, starring a key supporting character from Infamous: Second Son, Fetch Walker, and serving as a direct prequel to its main inspiration’s events. 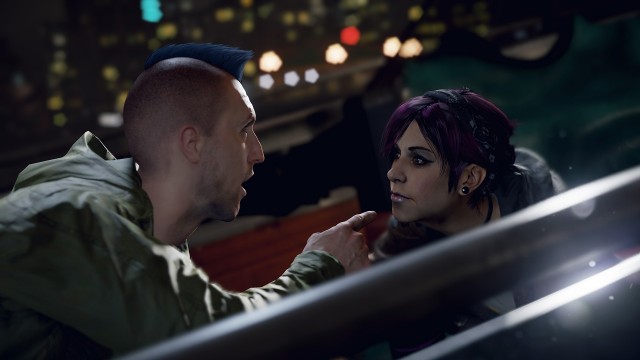 As much as it’s appealing to hardcore fans and curious newcomers of Infamous: Second Son however, Infamous: First Light isn’t required playing for PS4 owners that could care less however. Its prequel story is very short, and the series’ former issue with repetitive combat is back now, given that, unlike Infamous: Second Son, you’re back to only having one superpower at your disposal with Fetch.

Infamous: First Light is ultimately a good standalone expansion for what it offers, but the fact that it takes some steps backwards with the design makes it feel just a bit inferior to Infamous: Second Son unfortunately.

Infamous: Second Son is arguably the PS4’s prettiest launch window exclusive, and naturally, Infamous: First Light looks just as great. The painstaking amount of detail on the main character models, namely Fetch herself, remains absolutely exquisite, as do the incredible displays of light and colour that explode with every use of Fetch’s neon powers. There may be no other major Conduits besides Fetch in Infamous: First Light, if you don’t count Infamous: Second Son villain, Brooke Augustine occasionally showing up in cutscenes, but this means that Fetch’s flashy powers can exclusively take the spotlight. 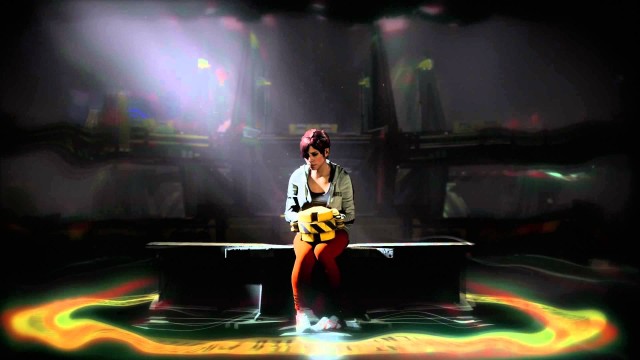 Despite the fact that players will be constantly slowing down time every time they aim Fetch’s neon lasers, and using powerful abilities like Neon Singularity (which takes the place of Delsin’s Karma Drop as a powerful trump card attack) that routinely rip through the environment, Infamous: First Light boasts impeccable performance as well. The game’s framerate never dips or feels taxed, and as much as combat can quickly become a mess of neon-lit, time-shifting mayhem, the game never suffers for it. It’s consistently easy to manage what’s going on and how to respond to it, even when the screen gets very crowded, which is crucial for the game’s new Battle Arenas especially.

Once again, the environments of Seattle look very sharp as well, even if the Curdun Cay Battle Arenas don’t have as much flair to them, but that’s understandable. All in all, Infamous: First Light continues to be a visual delight, and remains one of the best-looking visual offerings that the PS4 has seen yet!

The same unintrusive soundtrack stylings of Infamous: Second Son are back in Infamous: First Light, and once again, there’s really nothing to say about them, since they’re often so quiet and understated. Fortunately, the sound effects continue to pick up the slack, as the searing and crackling of Fetch’s neon attacks are just as satisfying to listen to as they were when Delsin wielded Fetch’s powers in Infamous: Second Son.

Voice acting continues to stand out as well, with Laura Bailey reprising her voiceover role as Fetch to great effect. Fetch ends up being a more interesting protagonist than Delsin thanks largely to this expansion, where we get to see different sides of her beyond being just a violent rebel, even if her smug, smart-ass attitude is still highly enjoyable to listen to throughout the game.

Essentially, you get the exact same level of audio quality that you got with Infamous: Second Son, which is to say, very polished and well-realized audio, even if it’s nothing all that groundbreaking. The maintained uses of the controller’s mic as a cellphone ringtone, a charging indicator and a warning that Fetch is being swarmed by some new spider enemies in the Battle Arenas remain very clever as well!

Over the course of Infamous: First Light’s 3-4 hour main storyline, players assume control of neon-bender, Fetch Walker, as she recounts how she lost her brother, and what led to her capture by Brooke Augustine at Curdun Cay prison, directly leading up to the events of Infamous: Second Son. Once again, Infamous: First Light unfolds in a virtual representation of Seattle, though a more condensed version of it in contrast to Delsin’s main adventure in Infamous: Second Son.

Predictably, several elements of the game have been downscaled or phased out, though some of these are for the better. There’s no longer any morality system, which is good, as the forced morality component was a nuisance that merely forced two playthroughs for completion in Infamous: Second Son. Naturally though, there’s no switching of powers either, leaving you left to merely use and develop Fetch’s neon abilities, though at the very least, said abilities are very refined and snappy to use, and don’t require the same heavy degree of recharging that Delsin’s abilities so often do in Infamous: Second Son. 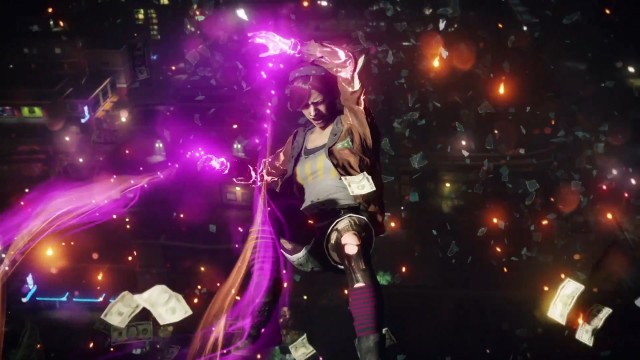 Since you’re now limited to Fetch’s neon powers, combat is a lot more repetitive than it was in Infamous: Second Son on the negative side. The rebalancing of gameplay for Fetch’s abilities also make the main Seattle gameplay disappointingly easy, since it’s easy to slow down time, speed away and target enemies’ weak points with little hassle, even on Expert difficulty. Sucker Punch attempted to rebalance the game by seeming to make Fetch less durable than Delsin, but the remarkable ease with which Fetch can take out foes still makes her feel pretty overpowered in the game’s main city, especially with no other Prime Conduits to fight against this time.

Infamous: First Light attempts to spice up and encourage melee combat regardless with the addition of Melee Finishers, which allow you to press the Triangle Button to deliver an especially powerful blow to enemies that will usually destroy them. After you smack around an enemy with a few presses of the Square Button, you can either press Triangle to use the Melee Finisher right away, or store a limited number of Melee Finishers to use with Triangle at a moment of your choosing. It sounds interesting, but given that combat is largely straightforward, and seems to favour Fetch’s laser abilities, it doesn’t make for an addition with any real impact on gameplay. 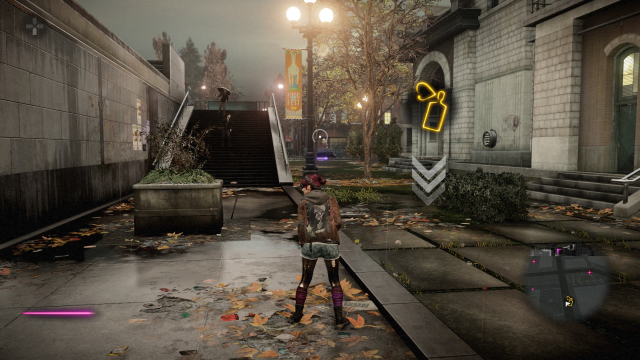 Fortunately, a small batch of extra activities at least give you some variation from the distractions that were available to Delsin in Infamous: Second Son. Fetch can now track down floating Neon Lumens instead of Blast Shards, which require a bit more jumping, dashing and hovering finesse this time, and can also pursue Neon Lumens in race sequences that have her dashing around Seattle trying to catch a large runaway Lumen. She also has a cool variation on Delsin’s graffiti habit, with players able to hold the controller in one hand and hold R2 with their forefinger while moving the controller, to emulate Fetch’s light graffiti displays. It’s not quite as cool and imaginative as the spray can simulation with the controller in Infamous: Second Son, but it’s appealing to do nonetheless.

Again though, the main story gameplay and free roam will likely fail to engage Infamous fans, as they are pretty lightweight in terms of challenge and longevity. Fortunately though, Infamous: First Light has another big draw, the Curdun Cay Battle Arenas, where players can take on waves of foes to push their combat skills to the limit. These arena sections come in two varieties, those being Rescue and Survival.

Survival is pretty self-explanatory, as players simply fight an endless and gradually more difficult batch of enemies across three arenas, the evenly-balanced Alpha Arena, the D.U.P.-focused Beta Arena, or the demon-focused Gamma Arena, which features a few cool new enemies conjured from Eugene’s video manipulation powers from Infamous: Second Son. Rescue comes with an added wrinkle however, with players having to not only fight endless waves of enemies, but also rescue virtual hostages by destroying the enemies around them, and then touching the hostage to have them warp to safety. If five hostages die, you’re done.

These Battle Arenas are made all the better by the all-new introduction of Challenges as well, which task you with defeating certain kinds of enemies, defeating enemies with certain applications of Fetch’s powers, and doing other such special things, between both Seattle and Curdun Cay. When you complete Challenges, you’ll earn Skill Points, which can be spent to upgrade Fetch’s powers, making her stronger, more agile, and giving her new ways to use her old abilities, with core neon powers being gradually unlocked as the story progresses.

The Challenges are a nicely addictive way to get the most out of the expansion and the combat, especially given that they’re a great way to earn trophies. Trophy hunters will definitely want to play through Infamous: First Light as well, since it sports a Platinum Trophy, even being a cheaply-priced standalone expansion, and is packed with valuable Gold Trophies, as well as a good chunk of Silver Trophies, and only a small handful of Bronze Trophies. 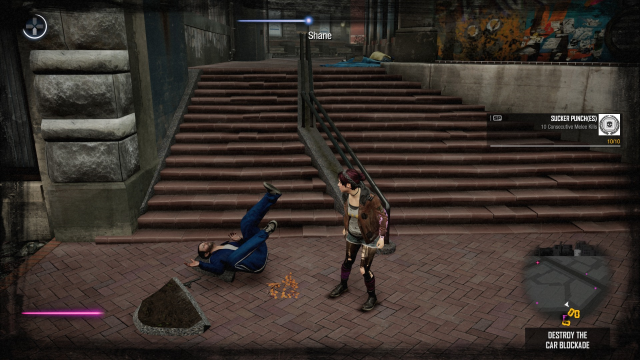 An online leaderboard will further motivate competitive players to push their skills in the Battle Arenas as well. For those who really enjoy the combat in the Infamous games on PS4, that’s a real treat, as this finally gives you a real reason to keep revisiting the experience after netting 100% completion, and it didn’t even need to force a sloppy, redundant multiplayer component to make that happen! 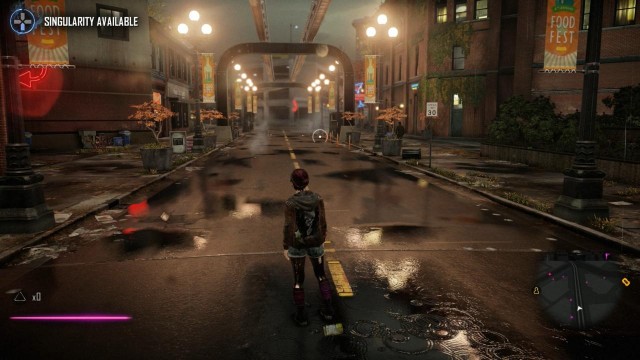 Infamous: First Light’s gameplay may lack the depth of Infamous: Second Son’s, but at least it presents its own rewards and value for those interested.

The storyline in Infamous: First Light is nothing all that shocking or mind-blowing, and if you’ve played through Infamous: Second Son already, you’ll already know the outcome right from the get-go.

Still, a standalone expansion centered on Fetch is a great idea, especially given how cool and appealing her character is. Even if the expansion is pretty short, it effectively illustrates how Fetch came to be who she is in Infamous: Second Son, and what ultimately led to the tragic loss of her only family. 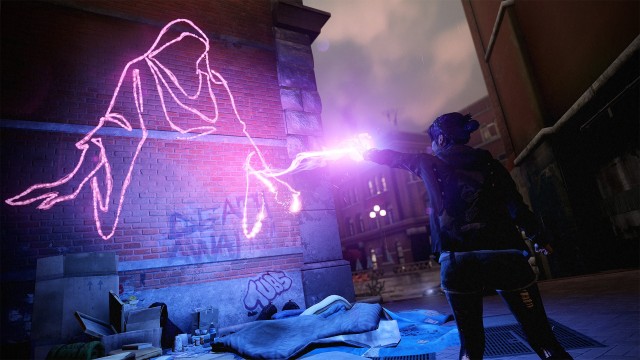 Essentially, if you’re a fan of Infamous, you’ll probably come for the story and stay for the Battle Arenas. The story isn’t really bad by any means, but there’s not much to it, and it carries few surprises. At least something else compelling is available in the expansion to compensate for that.

Infamous: First Light falls shy of its potential in some respects, but its more challenging bonuses and superior lead character at least give it a leg to stand on alongside Infamous: Second Son. If you particularly enjoyed Infamous: Second Son, Infamous: First Light is a good way to extend the experience, especially for only $14.99, but it’s not an expansion that will particularly wow you either.

Despite some downgrades in the combat and scale though, Infamous: First Light is another enjoyable, albeit lightweight action game for the PS4. Like Infamous: Second Son, it looks great, it’s good fun, and it nicely separates itself from the feel of other action games. The addition of the Curdun Cay Battle Arenas also does wonders for the long-term play value that this franchise previously struggled with, even by Infamous: Second Son, and climbing the ranks of the online leaderboard will give players incentive to keep tearing it up with Fetch, and perhaps Delsin. 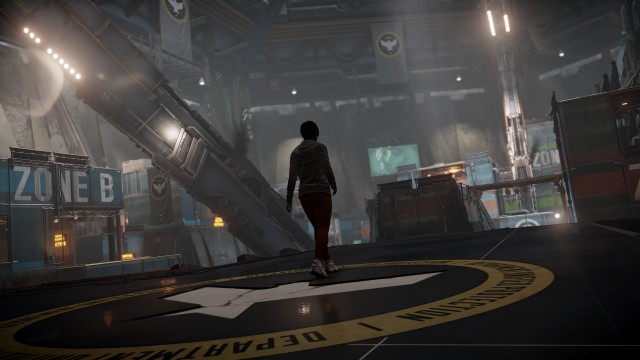 Ultimately, Infamous: First Light is an improvement over the merely decent Infamous: Festival of Blood on the PS3, though Sucker Punch’s standalone Infamous expansions could still do with a bit more meat in the main adventure.