Disney made a huge surprise announcement today, via an earnings call for the House of Mouse. Disney animation subsidiary, Pixar has begun work on Toy Story 4, which has already been given a release date of June 16th, 2017!

Pixar’s John Lasseter will direct Toy Story 4, and gave some vague hints about the story’s direction in an interview with the LA Times that was published today. The story will be a love story of some kind, and will immediately follow the events of Toy Story 3, which concluded with former human lead, Andy passing his toys on to a new owner, little girl, Bonnie. This may suggest that Toy Story 4 will take place before the events of the televised specials that have been airing to continue the series from Bonnie’s room.

The most recent televised special, Toy Story of TERROR!, aired for Halloween last year. It will be followed in December of this year by Toy Story That Time Forgot, a Christmas-themed short made for television, with the original movie cast once again returning to reprise their voiceover roles.

It’s not confirmed at this time, but it’s expected that the regular actors will also reprise their roles for Toy Story 4. 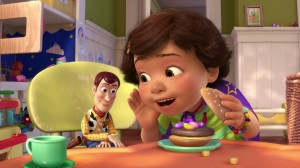 Toy Story 4 is the latest sequel confirmed to be in development at Pixar, with Cars 3 and The Incredibles 2 also in development, though neither of which have release dates at this point. A sequel to Finding Nemo, Finding Dory, will also be released on June 17th, 2016, almost a year to the day before Toy Story 4. Finding Dory will be preceded by not one, but two original films in 2015, Inside Out and The Good Dinosaur, set for release on June 19th, 2015, and November 25th, 2015 respectively.

Keep picking up Eggplante for all news and updates on Toy Story 4, along with Pixar’s other projects.