NOTE: We apologize for the tardiness of this review. Our coverage of The Game Awards and PlayStation Experience forced us to delay the review by a couple of days.

Things are really heating up on Constantine, now that the show is back to its regular order of events. After a breather with the delayed Halloween episode, “Rage of Caliban” last week, “Blessed are the Damned” upped the stakes in the lead-in to the Fall finale, presenting a very compelling case for Constantine and Zed, and a welcome chance to give Manny a larger role.

The case-of-the-week had Constantine and Zed traveling to a small church, where a preacher has miraculously gained the ability to heal people of their afflictions. Clearly, as Constantine suggests, mortals aren’t meant to wield powers such as these, and something nasty is brewing in the background.

Sure enough, the people that the preacher heals start turning into (slightly silly) maniacs that have a habit of violently murdering whoever they come across. Informally referred to as, “Ghouls” by Constantine, the victims are apparently made from corrupted magic. Naturally, the increasing tide of the, “Rising Darkness” is once again to blame.

The episode attempts an interesting theme about blind faith, and how it can be dangerous. The drama works to mixed effect, especially when Constantine seems cynical about the value of religion when God and angels clearly exist, but the material with Zed was far better than usual this week. We see a glimpse of Zed’s personal demons and crisis of faith, as well as how her abilities and affiliation with Constantine have affected her personal life. After she accepts a date with an art model, and inevitably postpones it by the end of the episode, it helps to show that Zed hasn’t come anywhere close to losing herself in Constantine’s world. She still merely has one foot in it, and isn’t sure if it’s sure footing.

The end reveal that the art model was a peon of some seemingly menacing character was a solid way to end the episode too. It sweeps some of Zed’s personal drama under the rug, at least in the long-term, but at least it presents an interesting character conflict for down the line. 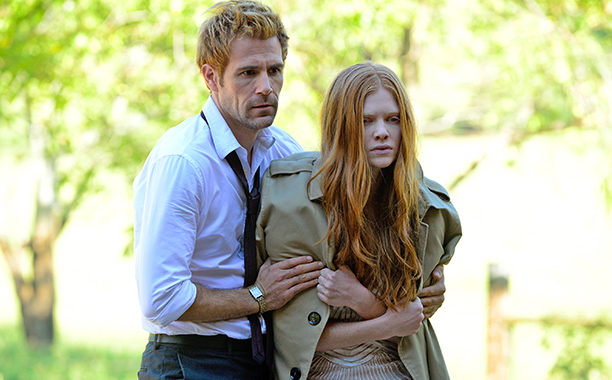 Anyhow, the source of the preacher’s power turns out to be an angel’s feather, which was somehow plucked from an angel as someone was being taken to Heaven. After Constantine and Zed use some handy tricks to find the angel, Constantine has to confront the preacher and grab the feather, so it can be returned to the angel before she ceases to exist.

It was neat to see the feather initially reject Constantine, forcing Zed to fake a desire for baptism so that she could nick the feather herself. It reminds us that Constantine is still technically damned, and could very well just be another tool in Heaven’s arsenal. Constantine himself even brings up the question of whether he’s a good man again in this episode, and it would seem that in the eyes of God, he’s still got a ways to go.

The Manny material also shone this week, with Zed eager to meet a real angel (and getting her wish for the most part), and Constantine getting frustrated at Manny refusing to directly help him with a pressing danger that is very much Heaven’s problem. Seeing Manny interact with the angel, who had become corporeal in the mortal realm after losing her feather, was also a neat new dimension to his character. As much as Manny seems disconnected and apathetic, his questions about how pain feels, and how the sun feels, and why mortals don’t appreciate the gift of the world that they’ve been given, was very poignant. It adds a nice element of tragedy to someone that was previously a character that appeared to have all of the answers. This episode stresses that he actually doesn’t.

The end reveal of the episode was also very well-done, with the preacher confessing that he was the dying man, and died after killing someone with his car. That means a mortal sin was on his soul, and since he didn’t own up to it, he was on his way to Hell, not Heaven. Thus, the angel is actually a fallen angel (who looked very cool with her blackened garb and wings!), cast out of Heaven for killing a human, and when Zed returns the feather, the angel prepares to take the world of humans for demonkind.

A protection spell of Constantine’s from before keeps the fallen angel in the barn where she’s being stored, but she soon after threatens the life of Zed if Constantine doesn’t remove the spell and release her. Constantine is left to appeal to Manny, who reminds him that angels are forbidden from interfering in the affairs of the human world. Manny initially appears to abandon Constantine and Zed to fate, but a highlight moment then takes place, whereupon the fallen angel taunts Constantine for being a slave to the useless whims of angels, only to have Manny appear in Zed’s place, and literally rip out the fallen angel’s heart, killing her. Awesome!

Manny tells Constantine soon afterward that he will face consequences for his actions, even though there was no other option but his intervention, but Constantine was nonetheless thankful. His quiet admission to Manny that he is happy to know that the angel is in the fight against the darkness with him was very assuring and heartwarming, and proves that Manny is more than just a tool himself. It also proves that Constantine is big enough to admit that not all of Heaven is out to get him.

“Blessed are the Damned” was a very well-written case-of-the-week, with some nice drama and no shortage of cool moments. The character moments on the show are definitely getting better, and it’s good to see that Matt Ryan is no longer carrying all of the show’s character-driven appeal on his own shoulders.

Constantine 1.7: "Blessed are the Damned" Review
Constantine really elevated the character material with the supporting cast this week, with a well-written and dramatic case that made for a great lead-in to the Fall finale.
THE GOOD STUFF
THE NOT-SO-GOOD STUFF
2014-12-07
86%Overall Score
Reader Rating: (0 Votes)
0%