Much like the doubting professionals of secret animal agency, The North Wind, it may be easy for discerning audiences to doubt the capabilities of Skipper, Rico, Kowalski and Private as a leading presence. Despite being scene stealers in the three Madagascar movies released to date, and even headlining their own (unrelated) TV show on Nickelodeon a few years back, the four titular Penguins of Madagascar were undeniably side characters, meant simply to enhance a movie about a clearly different batch of characters.

Fortunately, as the happy story inevitably displays, one shouldn’t underestimate this quartet of flightless mischief makers. Penguins of Madagascar is a fun, upbeat romp that stands on its own, even if it doesn’t reach the scale and quality of the main three Madagascar movies. It’s a disposable, kid-friendly spin-off that succeeds at what it sets out to do, and should prove to have an acceptable share of fun moments for adults as well.

There’s ultimately little to say about the movie then, particularly since it’s outclassed by the likes of competing family flicks like Big Hero 6 this Holiday, but if a harmless, colourful distraction is all you’re craving, Penguins of Madagascar provides an entertaining, even if forgettable sojourn while we wait for Madagascar 4 in 2018.

The four leads are not voiced by celebrity actors, nor do they need to be. Despite being voiced by production crew and background voices in other animated projects, Skipper, Private, Rico and Kowalski are enjoyable one-note jokers with a knack for espionage. That’s another thing that elevates them above other gag characters of their ilk. They’re not simply portrayed as bumbling idiots, or at least not constantly, and actually do know what they’re doing to some extent when they’re trying to achieve something, even if their methods still elicit plenty of unexpected and hilarious results.

Sure, there are still plenty of jokes centering on how oblivious the Penguins are, such as when they mistake China for Ireland during a mission for example (it makes more sense in context), but at least they’re not universal idiots. They’re underdogs who don’t always know the entire score, but do tend to function as a unit. It makes for some highly simple movie themes about friendship and trust that so many other animated movies have already done to death, but at least Penguins of Madagascar doesn’t bite off more than it can chew with its lead character material, which is part of the reason why a small-scale spin-off like this works. 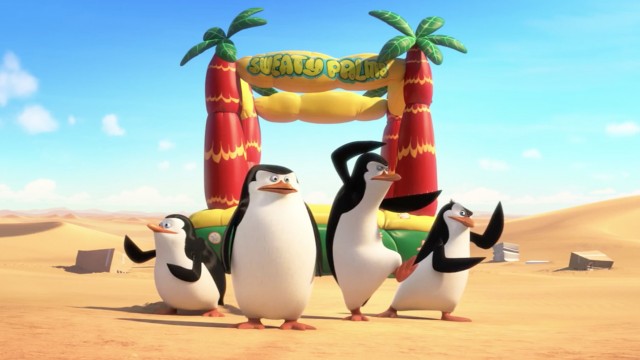 Nonetheless, the group comes into conflict with an antagonistic spy agency called The North Wind, comprised entirely of Arctic animals. Led by a grey wolf whose name is classified, leading to Skipper continually addressing him as, “Classified”, voiced by Benedict Cumberbatch, the North Wind exist as foils who are meant to create the inevitable doubt surrounding the Penguins’ abilities. The group also includes a harp seal called Short Fuse (Ken Jeong), a snow owl with a Russian accent called Eva (Annet Mahendru), and a good-natured polar bear called Corporal (Peter Stormare). Like Classified, their personalities are one-note and mostly condescending, but they should prove amusing to children, even if they’re as forgettable as the rest of the movie.

Both the Penguins and the North Wind have to stop the machinations of the movie’s octopus villain, Doctor Octavius Brine, or, “Dave”, as he seems to prefer to be called. Voiced by John Malkovich, Dave is the one other character besides the Penguins that actually stands out in the movie. A running gag involves him saying Hollywood actors’ names inadvertently when addressing his minions and voicing common speech, which adults should find especially funny and clever, even if these lines may go over childrens’ heads. Fortunately, Dave’s kooky octopus minions pick up the slack.

Given that this is a smaller spin-off movie for Dreamworks Animation though, there aren’t really any other characters of note beyond these. On the bright side, the handful of characters that are present provide disposable cartoony antics with reasonable effect, even if they don’t do much else of note.

From the get-go, Penguins of Madagascar boasts a clever opening. Picking up immediately after the conclusion of the franchise’s previous movie, 2012’s Madagascar 3: Europe’s Most Wanted, the Penguins are shown desperately trying to escape the animals’ ‘Afro Circus’ celebration from the conclusion of the previous movie, since it’s driving them crazy. It helps to show that while the Penguins do operate with the other animals, they can subvert the rest of the franchise’s convention to do their own thing, and thus, the movie kicks off on a strong note.

From there, we flash back quickly to where the Penguins came from, with Skipper, Rico and Kowalski rescuing and adopting Private as an egg after the unborn penguin rolls away from a march. Things then quickly shift back to the present, making the origin feel a little crowbarred in. Still, at least it gives some idea as to how these four misfits became a family, even if not an entire idea. 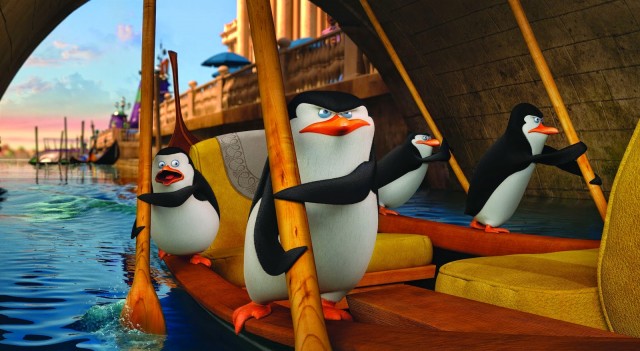 The rest of the plot is paper-thin though, even if that’s acceptable in a movie of this nature. The story may not aim very high, but at least it seems to be aware that the Penguins aren’t meant to be large-scale characters. They’re small-scale joke characters that are capable of having their own independent adventures, as the TV show already proved, even if they’re cliched adventures that predictably involve simply saving penguin-kind from a disgruntled villain.

This makes the whole affair pretty forgettable in the end. Still, at least the cartoon energy and jokes work while the movie lasts, providing some fleeting entertainment for families, and an undemanding distraction for independent adults simply checking the movie out as animated/3D movie enthusiasts. 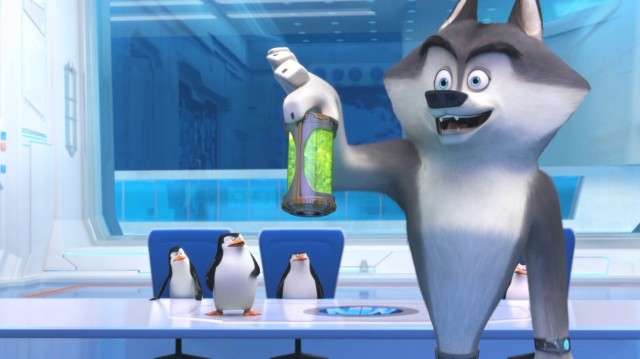 By mostly focusing on straight-up cartoon silliness, Darnell and Smith make a movie that is fun to watch for children especially, even if there’s not much to it. Despite this, the same Dreamworks Animation polish is present, and the final product of Penguins of Madagascar feels like a worthy franchise entry, even if it’s more disposable than the three main movies that came before.

As with the movie’s visual pace, the audio work in Penguins of Madagascar is highly energetic, and may exhaust some adult viewers who are tired out after the Holiday madness. Still, children should find the movie’s score and sound effects to be quite a lot of fun, especially since you can’t fault the movie for going full tilt and having confidence in its zany leads. 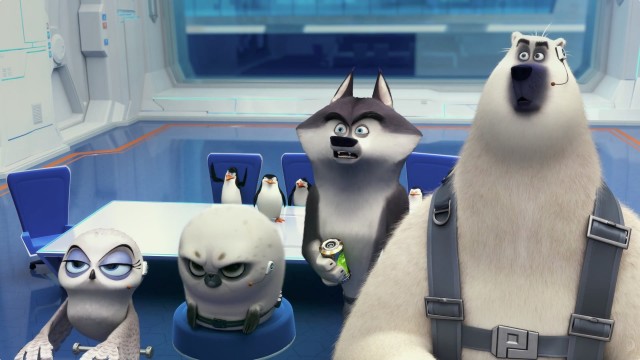 Predictably, the soundtrack features a lot of tongue-in-cheek composition that mimics the style of spy movies like those starring James Bond. There’s even a bit of influence by the Batman movie scores composed by Hans Zimmer, which is a bit of a surprising influence, but it still fits when it’s done in such an upbeat, ridiculous way. Even if it does border on obnoxious at times, the comedic spy score is a perfect fit for these characters, and it does help to make them feel worthy of their own movie.

Being a smaller spin-off, the animation in Penguins of Madagascar doesn’t feel nearly as spectacular as most other recent Dreamworks Animation flicks, namely this past Summer’s stellar How To Train Your Dragon 2, but it’s nonetheless quite lively and appealing to look at. Again, the pacing can be a little hyperactive and relentless for some worn-out adult audiences, but kids should get a huge kick out of the movie’s zippy antics.

The Penguins themselves, along with their exaggerated cartoon mannerisms, are rendered as well as ever. The rest of the designs are straightforward, with the environments standing out more than the characters, but it still makes for a well-produced animated romp. It’s more fun than beautiful, but it’s never difficult on the eyes. 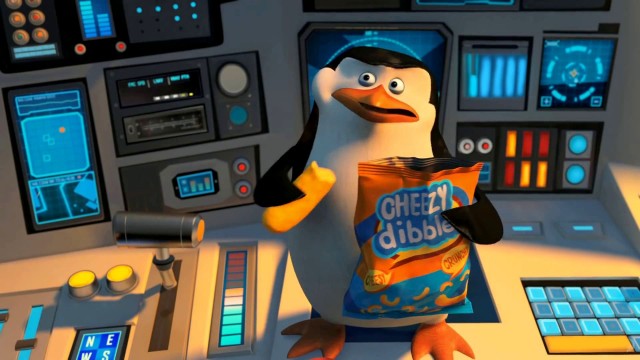 The only disappointment with the visuals in fact is the 3D, which feels surprisingly patchy and poorly-utilized compared to most other Dreamworks Animation movies, most notably the fantastic 3D presentation of Madagascar 3: Europe’s Most Wanted a couple of years ago. The 3D is serviceable enough if you like 3D movies, and especially if you have children that like 3D movies, but it’s the first Dreamworks Animation 3D job in many years, probably since Shrek Forever After, that really doesn’t feel essential on the big screen. If you’d rather just stick with the 2D cut, you’re really not missing much.

The movie still manages to be more visually impressive than any given CG TV series, including the Penguins’ own from before, but its style is firmly rooted in simple cartoon shenanigans, the kind that most other animated movies mastered a long time ago. Even if it’s nothing that animated movie enthusiasts haven’t seen before though, it’s certainly nothing bad.

As a harmless distraction though, the movie works for what it is. It’s fun while it lasts, and while it’s very forgettable, at least it proves that the Penguins can indeed headline their own movie. Sure, the main Madagascar movies are more memorable and ambitious for kids and adults alike, but Penguins of Madagascar works, even if many no doubt thought that it wouldn’t. 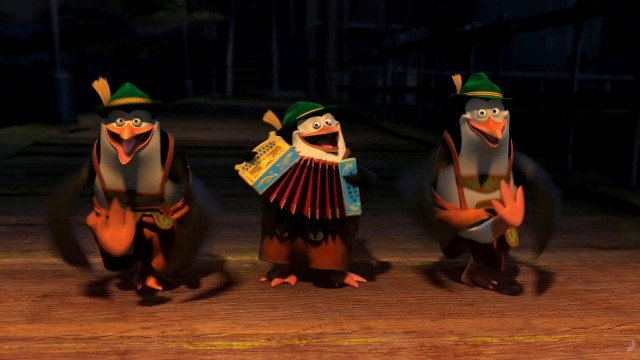 By the time Madagascar 4 rolls around in 2018, we adults will probably have mostly forgotten about this movie, but we’ll definitely still love this franchise’s flightless sidekicks. At the end of the day, the Penguins are still underdogs, but at least they’re underdogs with heart.

Penguins of Madagascar Review
Penguins of Madagascar is an amusing and colourful spin-off that will primarily entertain children, even if adults will still find enough to chuckle at while the movie lasts.
CHARACTERS75%
PLOT70%
DIRECTION75%
MUSIC & SOUNDTRACK70%
VISUAL EFFECTS75%
THE GOOD STUFF
THE NOT-SO-GOOD STUFF
2014-12-28
73%Overall Score
Reader Rating: (1 Vote)
27%