The second of two premiere episodes for Agent Carter, “Bridge and Tunnel” continues on from the events of its predecessor, with Peggy witnessing the destructive potential of Howard Stark’s nitramene, and continuing to pursue the connection to Roxxon Oil. Jarvis once again tags along, against Peggy’s wishes for the most part, with Peggy’s fellow SSR agents left to play catch-up, as they will probably be wont to do throughout this series.

The first premiere episode was a great way to kick off Agent Carter, and the second continues on many of the same strengths. The rapport between Peggy and Jarvis remains fantastic. The series’ tone remains a good mix of fun and drama. The plot does a great job of subverting typical Marvel superhero conventions. In fact, it’s small wonder that ABC simply decided to air the first and second episodes back-to-back for their miniseries’ premiere, since the second episode does feel like a direct extension of the first one. 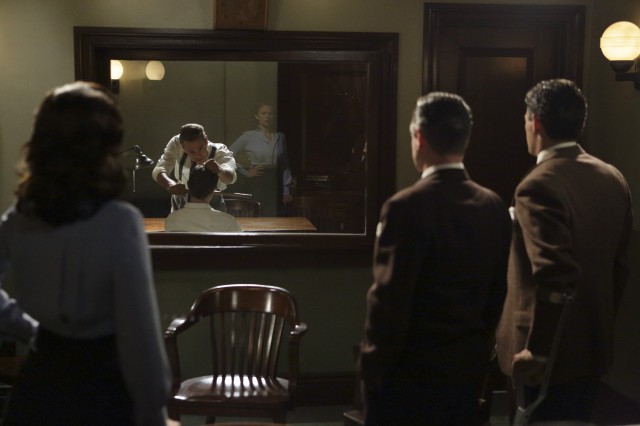 As Peggy continues to pursue the connection between Stark’s stolen weapons and Roxxon, this episode places a lot more emphasis on her having to cover her tracks from the previous episode. There are some clever bits involving Peggy having to try and erase the evidence of her previous exploits for Howard, and while there is a hair-raising moment involving someone apparently getting a picture of Peggy in her blonde wig, any viewers that were paying attention from the previous episode would remember that Peggy turned away from the camera when it flashed, so that’s kind of a non-issue.

Eventually, Peggy narrows down the driver of the stolen dairy truck that housed the nitramene supply, after a very humourous dairy infiltration scene with Peggy posing as a health inspector, of course. Pursuing the man with Jarvis in tow, and hunted by the same assassins that targeted her in the previous episode, Peggy incapacitates her quarry, and Jarvis appears to save the day by taking the would-be killer prisoner.

Of course, this inadvertently leads to more wackiness, as the incapacitated target gets away, and lands right in the hands of the SSR agents, complete with the chair still tied to his back. It almost feels like something out of Porky’s, if Porky’s took place in the spy world shortly after WWII.

Here comes the only noticeable gripe with an otherwise great sophomore episode; The second episode of Agent Carter gets a little slapstick-y in places. Some of it works just fine, but some of it feels forced and unnatural for what’s supposed to be a more grounded show for the Marvel Cinematic Universe. Since this is still a Marvel show, you could forgive some of the wacky action beats and gags to a point, but it sometimes clashes with the otherwise humanized tone of the show, especially when it comes shortly after Peggy having to cleverly sneak around the SSR offices undetected to lift evidence that she thinks may implicate her from the previous episode.

Beyond that though, “Bridge and Tunnel” was another highly enjoyable episode, which ended with more promising teases of a mysterious foe in the shadows, code-named, “Leviathan.” Could this be something to do with HYDRA? After all, Leviathan is basically the Communist equivalent of HYDRA, if Marvel Comics canon is anything to go by. Could this be a lead-in to some hidden circumstances behind the historical event of the Cold War? It raises some interesting questions, and it continues to give Agent Carter an intriguing initial mystery to solve.

Another plus of this episode came from exploring a bit more of Peggy’s personal life, with Lyndsy Fonseca’s kindly waitress trying extra hard to find Peggy a new apartment. Peggy initially puts up a fight, but soon sours on the idea of staying in Howard Stark’s, “Entertainment guest house.” By the end of the episode, Peggy gets some new living arrangements, and some helpful advice from Jarvis helps her put aside her issues with attachment and make a new friend. After seeing Peggy’s struggles with the loss of Captain America illustrated so well in the previous episode, it was rewarding to see Peggy ultimately rise above them, even if she’s no doubt not fully ready to move on from losing Cap.

Agent Carter continued strong in the second episode of its two-hour premiere, with a well-established mystery and the same continued high points from the first episode. With a bit more insight into who Peggy is actually up against, and a welcome step forward in her personal journey, this is a show that is continuing to start Marvel’s 2015 on a very high note.