Arrow brought back one of this season’s best villains this week, as Peter Stormare’s new Count Vertigo, Werner Zytle ends up escaping police custody, and preparing to kick-start his operation of trying to flood Starling City’s streets with his fear-inducing Vertigo drug once again. Meanwhile, Oliver and his allies continue to try and figure out how to deal with Laurel, who won’t relent in taking up the mantle of Black Canary.

This is a big episode for Laurel, predictably, as she must literally come face-to-face with her demons this episode, after more than once being injected by Count Vertigo’s, well, Vertigo. Upon injection, Laurel hallucinates that Count Vertigo is her dead sister, Sara, who accuses Laurel of being a fraud and stealing her identity, and it’s great to see Caity Lotz making another return as the hallucination of Sara! At first, Laurel gets clobbered, as she finds herself unable to reconcile her guilt and helplessness over Sara’s death, and is left to submit to a pretty nasty beating, just barely getting bailed out by Oliver and his crew.

Naturally, Laurel continues to be berated for her actions as Black Canary, and at one point, it even appears that she is ready to give up at one point. Some comforting words from Felicity make her re-consider however, and ultimately help her overcome the lingering doubt over her vigilante future, allowing her to best the Sara hallucination (and Count Vertigo) during their second battle. This also helps to give her the confidence to make a hard decision with her father, after she also hallucinates about Captain Lance berating her for not allowing her to grieve for his dead daughter.

In the end, Count Vertigo ends up just becoming a means for Laurel to face her inner turmoil, but that’s fair enough. It led to a good chunk of enjoyable action, and seeing Laurel get past her identity crisis as Black Canary was fulfilling. It was also a powerful moment when the episode closes out with Laurel finally confessing to her father that Sara has died, immediately after Captain Lance tells her that he has deduced that she is the new Black Canary. Seeing Laurel and Captain Lance cry together in the office was a very tragic and poignant moment, but in a way, it’s also kind of heartwarming, as Captain Lance can finally face the truth and begin the grieving process. It also proves that he’s a tough man once again, and didn’t ultimately keel over at either bit of bad news with his daughters, which was nice to see. 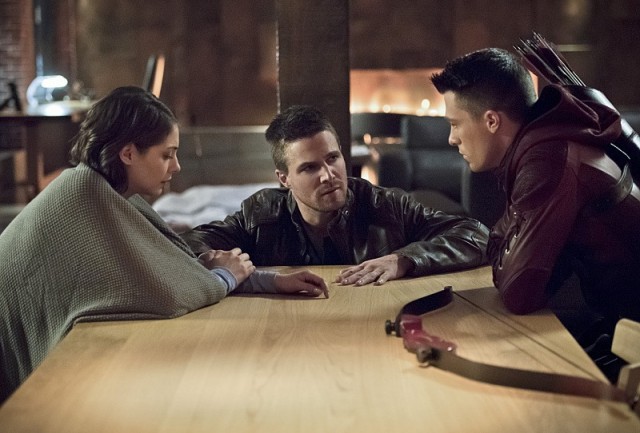 “Canaries” also boasted impeccable drama with Thea this week as well. Early in the episode, Oliver and Merlyn debate the reality that Thea must learn both of their secrets, and, surprisingly early in the episode, Oliver capitulates, and brings Thea into his secret Arrow lair. After Thea learns that her brother is The Arrow, both Oliver and the audience expect a furious reaction, but surprisingly, Thea takes it well, and embraces Oliver, also putting together that every time Oliver ever lied or left her to go somewhere, he was saving someone’s life. It was a heartwarming moment in a strong episode that was full of heartwarming moments.

Thea also narrowly escapes an assassination by Chase, who is cornered by Merlyn before committing suicide with a cyanide tablet. The threat of the League of Assassins is closer to Thea than ever, and this leads to both she and Oliver agreeing on some more hardened training. How? By returning to Lian Yu! Thea is going to the island for the first time (her complaints about its terrain amidst Oliver’s comfort is quite funny), but both are sure to face a very powerful enemy next week, if we recall who is still left on the island after the conclusion of Season Two.

As for the flashbacks, Maseo tells Oliver that he is fleeing with his family, with Oliver being captured and tortured by Amanda Waller for Maseo’s whereabouts. Oliver is eventually forced to give up Maseo, but it turns out that Maseo lied about leaving on the ferry to Shanghai, anticipating Oliver’s capture in advance. A cool twist is had immediately afterward however, with Amanda Waller taking the two men to apprehend China White in… Starling City! Yes, Oliver is coming home, and it will be very interesting to see how this pans out during the flashbacks of next week’s episode.

“Canaries” was another especially strong episode for Season Three, and after some of the bumps in “Uprising” last week, it’s good to see the third season continuing on a more assured, satisfying note overall for 2015. With next week’s episode bringing the present to the past and the past to the present, things are bound to get more exciting than ever as the true battle against Ra’s Al Ghul and the League of Assassins is about to begin.

Arrow 3.13: "Canaries" Review
Laurel faced her inner demons, Oliver told Thea his secret, Captain Lance learns of Sara's death, and Thea narrowly escapes her own demise by the League of Assassins, all to great effect, in a strong Arrow episode that was packed with both exciting action and heartfelt drama!
THE GOOD STUFF
THE NOT-SO-GOOD STUFF
2015-02-12
88%Overall Score
Reader Rating: (0 Votes)
0%