After being absent from the air since December, Agents of S.H.I.E.L.D. finally returned, triumphant and aggressive after the events of its earth-shattering midseason finale. With Agents of S.H.I.E.L.D. serving as the catalyst for introducing the Inhumans to the Marvel Cinematic Universe, we get a potential four-year stretch to learn about this new subset of Kree-made mutants, before their dedicated MCU movie comes to theatres on June 12th, 2019.

With Trip’s death from the midseason finale gaining plenty of focus, a variety of reactions were had to Skye and Raina surviving the destruction of the temple. Initially, it’s presumed that Raina was buried with the shattered remains of Trip (which Simmons and co. manage to excavate), but after a mutated and highly vicious Raina starts massacring the S.H.I.E.L.D. workers, tensions only get higher amongst Coulson’s crew, particularly now that Mac’s head has been cleared from his possessed state.

Of all the reactions however, none hit home more than those of Skye, who spent this entire episode in quarantine. Yes, Marvel fans know that there’s no danger, as Terrigen Mists aren’t contagious, but there’s no way for the characters to know that. Skye bearing the guilt of Trip’s death, and the activation of The Diviner made a lot of sense, and was very emotional to watch. It only got more emotional when her quarantine room would occasionally shake, as her powers continue to manifest and develop without her knowledge.

The show did an excellent job of spotlighting the dangers of the advent of Inhumans by ordinary people who can’t possibly understand it. It really plays to the strengths of Agents of S.H.I.E.L.D., since it’s meant to be a show about ordinary people surviving in an extraordinary and ever-developing world that just keeps raising more and more questions. The way that “Aftershocks” makes the Inhumans feel like a mystery with a lot of potentially catastrophic unknowns is handled well, and doesn’t make the show feel like it’s suffered by the mystery of Coulson’s alien writing now being solved. 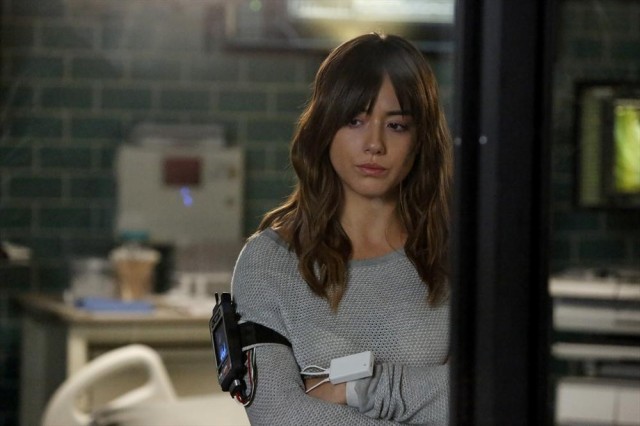 With that said however, some of the reactions by Coulson and his team felt like a bit much. The first big argument that teases Skye’s earth-shaking when she’s stressed out sometimes felt forced, and Simmons suddenly deciding that superpowers were a big mistake that should never have been pursued felt overblown and out-of-character. Also, Mac apparently has an anger problem that he just brought up this episode. Since when?! Mac’s been one of the most soft-spoken agents of all, and now he says he has rage issues? I don’t buy it. I get that the show wants to show the characters visibly affected by losing Trip under such difficult circumstances, but there are times where this episode starts reaching for drama.

Anyway, eventually, we get to see what Raina has become, a hideously deformed, thorn-covered mutant with deadly claws and seemingly enhanced speed. Raina believes that Skye stole her real transformation from her, which almost starts an issue with Skye’s father, though Cal subdues her with his immense strength, further teasing his true, albeit formally unrevealed Marvel identity as Mister Hyde. Raina initially appears as if she’ll commit suicide by walking into traffic afterward, which was a pretty poignant moment about the drawbacks to those who are burdened and suffering because of their mutation (calling back to Marvel’s own X-Men stories), before she is snatched away by a teleporting man with no eyes, the same one teased at the start of this episode, and at the end of the midseason finale.

This kind of portrayal of the Inhumans appears to line up with the industry rumour that Marvel wants to push them as a big MCU franchise, and as their MCU substitute for the X-Men characters, which are ineligible for the MCU at this point, due to 20th Century Fox still proudly owning and riding high on the X-Men movie rights. It’s not a bad idea, and it will be interesting to see how many more Inhumans are planned to be introduced on the series, now that Season Two is finally entering its second helping of episodes. 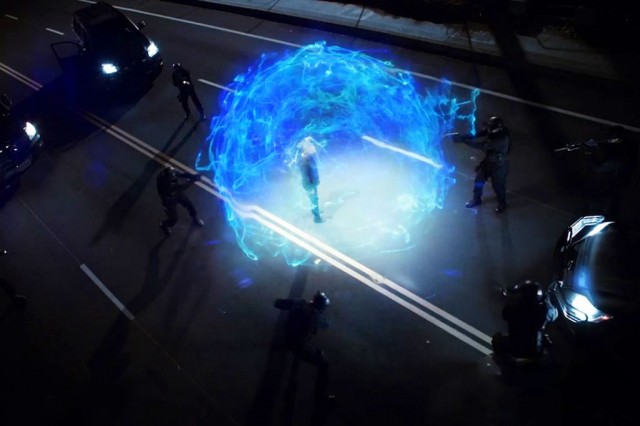 All the more intriguing is that Fitz, who appears to be rapidly on the mend, forges Skye’s quarantine results, and pledges to keep her Inhuman abilities secret. This will no doubt come back into play later, when the agents inevitably find about what Skye can really do now.

Amidst all of the Inhuman craziness, HYDRA remained active, attempting to regroup as Coulson tries to strike back at them, following taking his prisoner from before. After a seemingly smooth operation, HYDRA extinguishes their own members in the wake of vying for Whitehall’s vacated position (using Terrigen Mists, which raises plenty of questions for later), and HYDRA’s next move is thus left a mystery. The mentions of Baron Von Strucker, a big Marvel baddie and S.H.I.E.L.D. antagonist that will be making his proper big screen debut in this May’s upcoming Marvel Studios movie, Avengers: Age of Ultron was pretty cool though. You may remember him from his bit appearance in the mid-credits scene from Captain America: The Winter Soldier, revealing his use of Loki’s Sceptre to create Ultron’s future accomplices, Quicksilver and Scarlet Witch.

“Aftershocks” obviously didn’t replicate the showstopping high point of midseason finale, “What They Become”, but it was a fine return for the long-absent Agents of S.H.I.E.L.D. The introduction of the Inhumans seems to be setting up plenty of promise so far, and it will be interesting to see how long Skye’s secret stays hidden, and what it will mean for the rest of the team.