Viewers of last night’s Season Five finale of ultra-popular AMC series, The Walking Dead were treated to quite an astonishing surprise by Microsoft! During commercial breaks for the finale, two surprise teasers for Halo 5: Guardians aired, which showcased the same scenario playing out in a ruined landscape, with Master Chief staring down a wounded Spartan Locke (the lead character from miniseries, Halo: Nightfall) at gunpoint, then the second teaser having Locke being the one to point the gun at an injured Master Chief instead. Both teasers were given the tagline, “Hunt the Truth.” 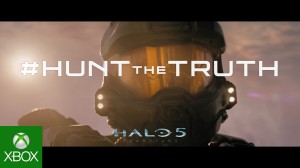 Better than this interesting marketing ploy however is that the teasers gave a solid release date for Halo 5: Guardians! The hotly anticipated Xbox One exclusive is officially set for launch on October 27th of this year.

Microsoft has often contributed to AMC for promotional consideration on The Walking Dead, ‘sponsoring’ flash-forwards to the following episodes in the series. It’s likely that AMC’s The Walking Dead season finale was chosen as the host for the Halo 5: Guardians date reveal, not only because of The Walking Dead’s insane viewership (it’s currently the most watched network drama on television), but as a byproduct of Microsoft’s partnership with AMC to help fund the show. It’s actually a pretty ingenious marketing tactic!

Halo 5: Guardians holding fast with its previously-announced Fall 2015 launch window should also prove incredibly relieving to Xbox gamers, after both Nintendo and PlayStation just recently delayed two of their own biggest planned blockbuster exclusives for 2015 into next year. Sony first pushed Uncharted 4: A Thief’s End from its planned Fall 2015 launch to a new Spring 2016 window, with Nintendo shortly after bumping their new, currently-untitled Legend of Zelda game for Wii U into an even less specific general 2016 window, after it was first announced for a 2015 release.

Microsoft has also confirmed another hot Xbox exclusive for Fall 2015 so far, Rise of the Tomb Raider, which will initially launch exclusively for both Xbox One and Xbox 360.

Keep hunting Eggplante for all news and updates on the Halo series.