NOTE: This review may contain mild spoilers for the debut season of Daredevil. That said, the review is written to accommodate those who have not yet watched the series, and as such, will avoid any discussion of major plot developments.

The Marvel Cinematic Universe has built itself upon light-hearted, popcorn-friendly entertainment. Blockbuster heroes like Iron Man, Captain America, Thor, Hulk and the Guardians of the Galaxy have presented as much humour as they have drama, with a hallmark of the shared MCU’s success being that it doesn’t necessarily take itself too seriously. In that sense, as much as each new Marvel Studios offering continues to surprise and delight its audience, one can know what to expect at this point in terms of tone.

Then, along comes Daredevil to challenge the very principles that the MCU built itself upon, delivering a dark, violent and uncompromising series that is more gritty crime drama than colourful superhero romp. It would initially seem like canonical suicide, betraying the general audience-friendly direction of the MCU for a mostly disconnected show that appeals wholesale to adults, likely being far too violent and scary for younger viewers, and carving out a dark new direction for the back alleys of the MCU, one that we now know is continually festering in the background, even in Marvel’s most chipper of movies and shows. 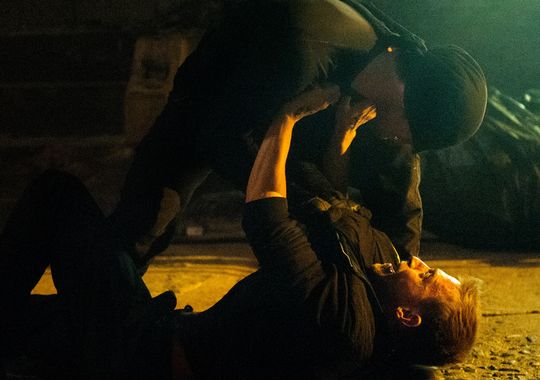 Well, thank God then that Daredevil is an absolute masterpiece in its debut season, continuing to expand the MCU in a great way, and proving that Marvel’s shared screen universe can still shock and engage audiences with fresh, compelling new adventures, even when they feel foreign to the principles that came before. Just as Guardians of the Galaxy most recently proved a wonderful surprise on the big screen thanks to its satirical direction and cosmic, larger-than-life fun factor, Daredevil succeeds just as much on the small screen for the opposite, more grounded and serious sensibilities, but in no less of a masterful way.

If you saw the ill-fated, self-contained 2003 Daredevil movie starring Ben Affleck that 20th Century Fox made, you may already be aware of the Man Without Fear’s backstory. If not, it goes thus:

The series centers on Matt Murdock (Boardwalk Empire’s Charlie Cox), a rookie attorney that has just begun a self-run firm with his college buddy and fellow lawyer, Franklin “Foggy” Nelson (former The Mighty Ducks bruiser, Elden Henson). Matt was blinded as a young boy, after attempting to save someone from a car accident that resulted in hazardous waste being shot into his eyes, developing extraordinary senses to compensate for his lack of sight, including a natural ‘radar sense’ that helps him focus his other senses to navigate in lieu of sight. Trained by another blind man and martial arts master, Stick (played in a one-episode role by Sucker Punch’s Scott Glenn), Matt prowls the crime-plagued neighbourhood of Hell’s Kitchen by night, as a black-garbed vigilante known as, “The Devil of Hell’s Kitchen.” Naturally, someone eventually comes up with a catchier name for him.

The way that the show justifies Hell’s Kitchen suddenly being a crime-laden cesspool is pretty clever, considering that the modern Hell’s Kitchen of the real world is actually a pretty nice, upper-class neighbourhood these days. Apparently, in the wake of the Battle for New York that took place during the climax of The Avengers, The Chitauri leveled pretty much the entirety of Hell’s Kitchen, which has led to it becoming a huge real estate opportunity for the city’s most corrupt and dangerous crime lords. This is a fantastic way to illustrate some surprisingly far-reaching consequences for New York in the aftermath of the alien invasion, even if the Chitauri were eventually repelled by Earth’s Mightiest Heroes.

If you saw that 2003 movie from Fox, you would also be aware that of Daredevil’s many enemies, one stands as the most dangerous and powerful. This of course is Wilson Fisk, a.k.a. The Kingpin (Law & Order: Criminal Intent’s Vincent D’Onofrio), a man so conniving, ruthless and resourceful that he owns virtually everyone in the area, from cops to crime lords to racketeers to judges to senators. Untouchable by the law, and feared by anyone outside it, Fisk (who is never actually called ‘Kingpin’ in the series at this point) pushes forward an aggressive vision to revive and rebuild the city for a better tomorrow, unsympathetic to anyone who would stand in the way of his movement.

Fisk is one of the most high-profile and unstoppable villains in the street-level lore of the Marvel Universe, and Daredevil is as much about him as it is its title hero. Of this show’s many strengths, Vincent D’Onofrio proves to be among the best of them, channeling a brilliant and surprisingly humanized Kingpin that balances a mighty, violent presence with a vulnerability and shyness that the character hasn’t been portrayed with before. Digging into Fisk’s psychology is infinitely complex and rewarding for viewers, with the show brilliantly setting the villain up with whispers to start, never actually showing him on-screen until a few episodes in, and then giving way to a steady trickle of information regarding Fisk’s past and present development into one of the MCU’s most dangerous threats for the street-level heroes like Daredevil.

Assisting in the examination of Fisk is the featuring of his love interest and future wife, Vanessa (Man of Steel’s Ayelet Zurer), creating a surprisingly human antagonist that has plenty to lose, and isn’t just sitting in an ivory tower, twirling his metaphorical moustache. Fisk is a man of conviction and complexity, grounded and relatable in a way that most of the MCU’s other baddies are not. I simply can’t heap enough praise on D’Onofrio’s highlight performance as Fisk, but the writing also works wonders in creating what is far and away the MCU’s best and most wonderfully layered villain to date. He’s as much a draw here as Daredevil himself! 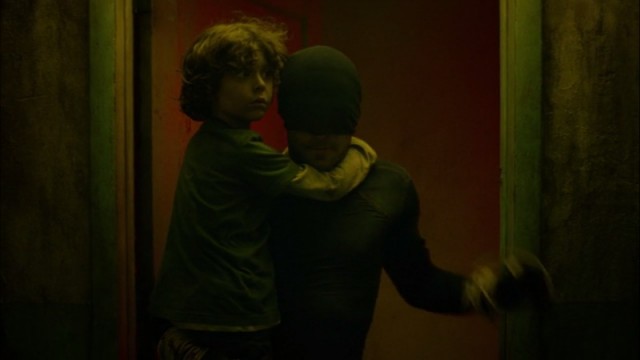 I suppose it’s high time we discuss the Man Without Fear then. Charlie Cox’s Matt Murdock is a charming, unassuming man that struggles with his inner demons. It’s easy to see why none would ever suspect the local blind lawyer while the also-blind vigilante is active, since Matt’s winning smile and outwardly law-abiding nature would no doubt waive any suspicion from him. Cox makes his Murdock an effectively conflicted, but also loveable hero, who plays well off of Henson’s Foggy, a joker and comic relief character who nonetheless doesn’t skimp on the drama when the situation calls for it.

Likewise, the vulnerability of Daredevil is hit home by the presence of Rosario Dawson as an original new character, Claire Temple, essentially a stand-in for Marvel Universe healer, Night Nurse. Claire peels back the layers of Matt Murdock’s tortured psychology piece by piece, and while she has less bearing on the first season in its later episodes, she makes for an effective first look at the limitations, both physical and emotional, that Matt faces every time he puts on his black garb.

Beyond the performances, the stories of Daredevil are pulpy and gritty to the extreme, creating a shadowy, yet inviting world saturated with moral greys and devoid of easy answers. The debut season of the show presents fun, yet gripping and serious new origins for Daredevil and Kingpin alike, with the rise and fall and rise of both characters being chronicled to wonderful effect. Daredevil is beautifully detailed in its plot work, but none of it feels superfluous. Every scene works perfectly when it comes to telling the stories of two men on opposite sides of the law, yet thrust on a collision course with one another by the single-minded drive to make a difference.

Of course, this still gives way to plenty of scenes of Daredevil flipping around and beating the crap out of criminals (you know, what you probably tuned in to see in the first place), and the action doesn’t disappoint either. The intense, fast-paced choreography is brilliantly done, particularly for a series that has far more license to be violent and visceral than any MCU-set media that has come before. Both Daredevil and his foes get battered and bloody as they break bones and slice flesh, with the hurt never fully moving into hard R-rated territory, but still being punctuated by some shocking moments of mutilation and murder that viewers would no doubt initially believe that the MCU didn’t have the spine for. Make no mistake. This show earns its TV-MA rating in some choice places, even if it doesn’t feel the need to have sex, profanity and nudity.

In fact, while true to the core of the comics, Daredevil is happy to be a grounded crime drama first, and a superhero series second, only making slight nods to a more super-powered MCU at large. Daredevil deals with grounded, human threats in both Kingpin and his underlings, with only passing appearances by other Daredevil villains from Marvel Comics, namely Melvin Potter/Gladiator, and Leland Owlsley/The Owl, and the latter doesn’t even have a single action scene. More well-known Daredevil personalities like anti-heroine, Elektra and villainous assassin, Bullseye are completely absent for now (though you do get some hints of the presence of The Hand, the deadly ninja organization that is all over Daredevil media), though it’s never to the show’s detriment. Daredevil isn’t afraid to carve out its own bold new take on The Man Without Fear, and the MCU’s darker corners that haven’t previously been seen, even if it also doesn’t forget where it came from. It’s a delicate balance between comic book sensibilities and the MCU setting, combined with dark, grounded crime drama that feels chillingly human, which Daredevil blends flawlessly.

All in all, there is nothing in Daredevil that feels weak or half-baked. Everything, from the writing to the performances to the action to the atmosphere, all feels outstanding. The first foray into a more adults-only corner of the MCU is a bona fide masterpiece, standing with the original Iron Man movie, The Avengers, Guardians of the Galaxy and Agent Carter most notably when it comes to both redefining superhero/comic book media, yet bringing so much wonderful creativity into one single, wonderful hub of entertainment excellence in the MCU. Daredevil throws open yet another incredible new door of wonderful possibilities, for the MCU, for Netflix, and for an edgier new wave of masked do-gooders.

So, go ahead and forget about that unfortunate Ben Affleck movie. This is a live-action offering well worthy of the Man Without Fear, and thensome!