Just as Arrow has begun bleeding more heavily into The Flash for its final few episodes in the season, The Flash has also creeped its way into Arrow’s final handful of episodes for Season Three. The two shows are basically existing as two halves of one more persistent super-show at this point, with a metahuman from Central City making his way to Starling City for this week’s episode, “Broken Arrow.”

So, after Arrow sat out last week, we pick up with Roy being incarcerated, and Captain Lance naturally still targeting Oliver, since he knows that he’s the real Arrow. Complicating matters is the aforementioned metahuman, a stray from Central City called Jake Simmons, a.k.a. minor DC Comics villain, Deathbolt (played by beloved comic book movie veteran, Doug Jones), who has the ability to absorb energy and generate it as plasma blasts. Helpless to stop Deathbolt, Oliver is forced to ask Ray for help, following Ray’s trip to Central City to beef up his A.T.O.M. suit a bit during this week’s episode of The Flash. 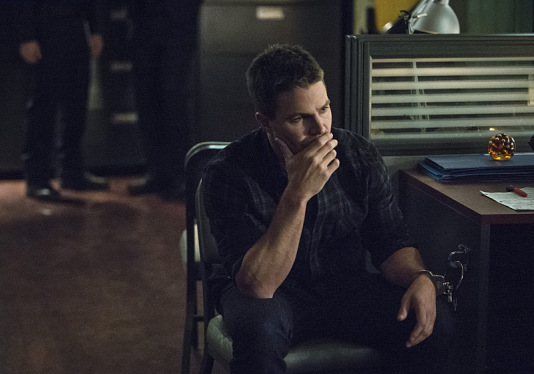 On this note, the show would have you believe that Felicity and Ray, for whatever reason, went to Central City in the middle of Ra’s Al Ghul’s vendetta against Oliver, where they magically put a pin in all of the previous issues that they had at the hospital, only to now bring them up again, while Ray made peace with Oliver, yet Oliver still doesn’t want to ask him for help, and Ray was still never really approved as a vigilante, and… Yeah, the timeline and logic of these crossover events with Felicity and Ray is a little bit screwy. It sounds like the writers of both The Flash and Arrow weren’t totally in perfect communication.

Regardless, Ray becomes the one way to apprehend Deathbolt, since Felicity can’t call Barry because he’s too tied up… Brooding over Wells? Yeah, it’s kind of a weak excuse. Still, even if it’s a bit laboured, it finally gives Ray a chance to shine in his A.T.O.M. suit… And get completely clobbered, forced to flee from Deathbolt after an initial attempt to stop him.

This becomes yet another opportunity for Oliver to hammer home how he’s experienced, and that’s superior than being powerful. It’s interesting to see him have this debate with a gadget-based hero, and not a powered hero like The Flash this time, with Oliver making the valid point that trusting his tech too much will get Ray killed, since he’s helpless without it. Obviously, there’s some irony here if you’re a Marvel fan, and are dwelling on Ray’s current similarities to Iron Man, who is not synonymous with any of the qualities that Oliver preaches, and yet seems to do quite alright for himself, on top of placing all of his faith in tech himself. Maybe Ray’s just not very good at being a superhero in the DC Television Universe. 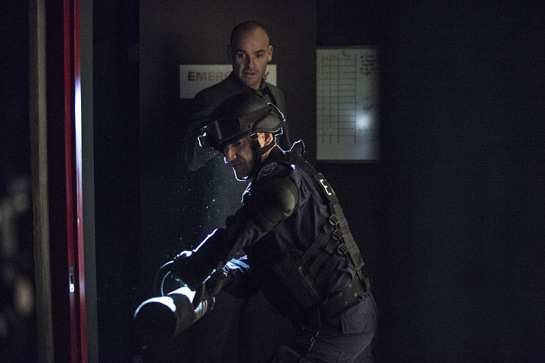 In any case, Oliver eventually decides to control Ray’s suit manually, after Felicity gets in a jam trying to stop Deathbolt from sucking up a power plant, but this proves to be for naught when Deathbolt breaks the connection. This leaves Oliver to coach Ray himself, and give that corny, “Believe in yourself, and you can do anything” speech that superheroes sometimes get in these live-action adaptations. It’s enough for Ray to finally incapacitate Deathbolt however, leaving him to whisk the villain off to S.T.A.R. Labs for a brief reunion with Cisco Ramon. On this note, it was hilarious to see The Flash’s often-indicated plot hole of how the metahumans eat or go to the bathroom in the pipeline get acknowledged by Ray, with Cisco not even answering the question because he’s absorbed in something else. Yep, that’s about right…

As much as a big moment was had with the first metahuman stomping around Starling City however, and the reveal that he was outside of Central City when the particle accelerator blew (a big hint to a wider DC Universe that should start laying the groundwork for the in-development team-up spin-off), the real draw of the episode was Roy’s fate, with fans speculating that Roy would bite the dust after Stephen Amell tweeted about having to say goodbye to a regular series actor.

Well, this was indeed Roy’s exit, as he is stabbed in prison, and Captain Lance reports to Thea and Oliver that Roy has died… Except Roy has not died, because Felicity and Diggle apparently orchestrated the whole thing to fool the city into thinking the Arrow died (only Captain Lance knows that Oliver is the true Arrow, and he has no evidence to support the claim), at the cost of Roy having to leave. This creates a bit of a plot hole, since the city should be aware that The Arrow saved Roy from being tortured and killed online in Season One, but whatever. 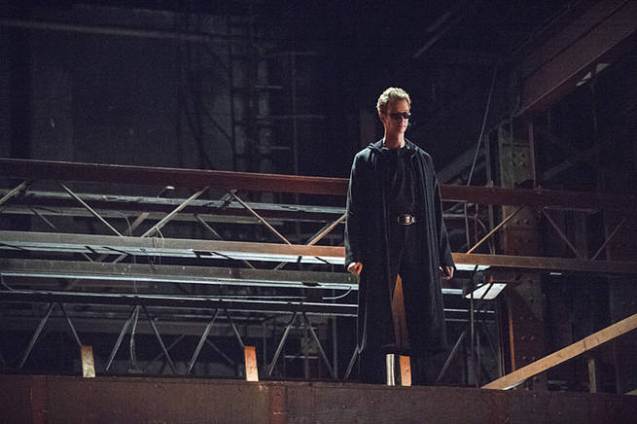 Either way, Colton Haynes’ contract expires at the end of Season Three, so Roy is exiting the series. As much as it’s easy to be annoyed about Arrow essentially wussing out of killing off Arsenal, the decision to fake his death with true, proud DC Comics logic, is understandable, since this leaves room for Haynes to make guest appearances on Arrow in the future, or even the upcoming team-up spin-off that’s in the works for 2016.

More pressing however is an end sequence, which has Ra’s Al Ghul visit Thea in her apartment, and Thea try to fight him off. This ends with Thea getting stabbed and bleeding out, as a shock to fans who were convinced that Roy would die in this episode. Naturally, this is also a fake-out though, as next week’s promo immediately spoils.

This just leaves the flashbacks, which finally generated some solid movement this week. General Shrieve was revealed to be a traitor, and stole the Alpha/Omega bio-weapon himself. Amanda Waller has apparently been held captive for a while, with the men chasing Oliver, Maseo, Tatsu and Akio revealed not to be A.R.G.U.S., but Shrieve’s men. It was a solid twist, and finally makes the flashbacks feel like they’re going somewhere interesting for the first time in a while this season. 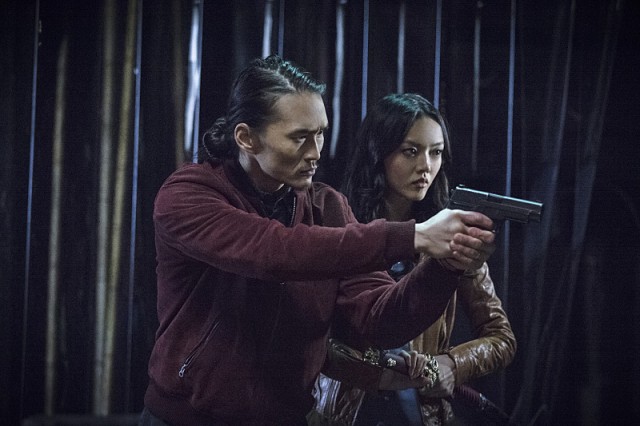 “Broken Arrow” wasn’t the dark, intense episode that it could have been, or perhaps should have been, but it made a decent exit for Roy without needing to kill him, and finally did something good with the previously tedious flashbacks that most of Season Three has suffered through. Still, with Ray finally getting a good chance to shine in his home turf, and metahumans now making their way beyond Central City, the DC Television Universe is nonetheless building up to bigger and better things overall, even beyond Arrow.

Arrow 3.19: "Broken Arrow" Review
A regular hero made his exit on Arrow this week, in an episode that didn't go as dark as it could have, but gave Ray a solid chance to shine, and helped to build a greater DC Television Universe beyond the confines of its two current shows.
THE GOOD STUFF
THE NOT-SO-GOOD STUFF
2015-04-16
82%Overall Score
Reader Rating: (1 Vote)
81%