A huge part of why The Flash’s first season has been so incredibly appealing is its portrayal of Harrison Wells/Eobard Thawne. Flash’s future arch-nemesis does not disappoint on this series, particularly through the show’s original and superb idea of Barry’s superhero identity being sculpted by the very man who would later become the greatest threat to him. Ironically, it mirrors the relationship between Green Arrow and Merlyn in DC Comics, despite the fact that Arrow went in an entirely different direction with the relationship between that hero/arch-nemesis combo.

“The Trap” proved to be a turning point for the series as well, as it served as the episode where Wells is made aware that Barry and his S.T.A.R. Labs assistants are now aware that Wells is not who he says he is. With Cisco’s incessant dreams of being killed by Wells in the abandoned timeline that Barry accidentally charged out of in “Out of Time”, the group conspires to use experimental lucid dream therapy technology to dig through Cisco’s sub-conscious, and find the memory of his death that was buried in his brain from the alternate timeline. 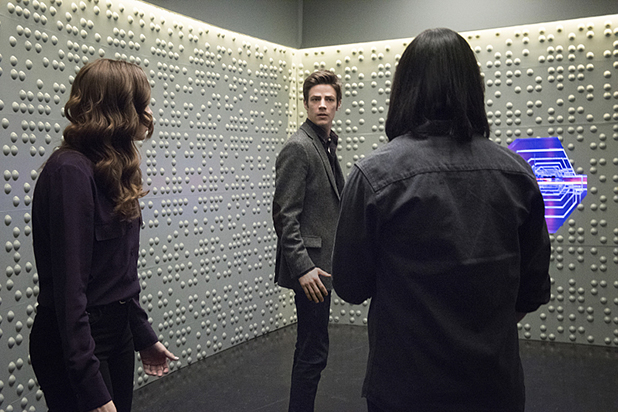 Before that however, the episode starts very strong, with Barry, Cisco and Caitlin getting to interact with Wells’ A.I. companion, Gideon, learning plenty of interesting information about Barry’s future. I especially liked the amusing moment where Gideon mentions that Barry is the founding member of-, and is then cut off by Barry to ask something else, coyly referencing Barry’s future as a founder of DC hero ensemble, the Justice League, without stepping on any legal toes with other networks. It was quite clever and funny for DC fans. Better still however was the surprise reveal that Barry was Gideon’s creator in the future, and that Gideon actually obeys Barry’s commands, including the one to not tell Wells that the trio were in Wells’ time vault. How she came into Eobard Thawne’s possession and service is quite the mystery.

In any case, when Cisco dives into his memories, and discovers that Wells did indeed murder him after confessing his true identity and deeds as Reverse Flash, the group decides to try and recreate the conditions of Cisco’s death to force Wells to confess, being able to bail him out before he’s killed this time. Cisco rigs the hologram to repel speedsters and act as a shield, inviting Wells to come in to see that Cisco has discovered the fake Reverse Flash hologram.

Sure enough, Wells tells Cisco again about who he really is, and recounts that Nora Allen’s death wasn’t his intention, but he stops short of confessing. When Detective West sees that Wells is getting too close to Cisco, he fires his gun instinctively, with Barry catching some, but not all of the bullets. One bullet goes right into Wells, who drops dead. For the moment, Barry is in anguish, realizing that he’ll never get his father out of prison now. 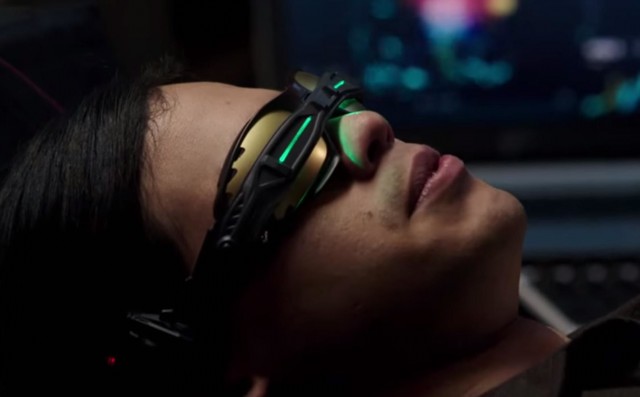 But, an ingenious twist takes place thereafter, with the body of Wells morphing into that of Everyman from last week’s episode, whom Wells used to trick his trappers into thinking Everyman was Wells. Yes, Wells has installed surveillance equipment in Barry’s, Cisco’s, Caitlin’s and Detective West’s homes, jobs, and basically everywhere else they go. He was fully aware of their plan, and lured them all into a trap of his own. Damn. That is one ruthless villain! Like I said though, Wells being so mysterious, ever-prepared and awesome is a big part of what makes this series so great to tune into every Tuesday!

Apparently, Detective West knows that Iris reciprocates Barry’s feelings, and he knows that if Eddie proposes, Iris will get caught up in the romance of planning a wedding, so much so that she won’t realize she’s marrying the wrong guy. West knows that she’ll stay faithful to Eddie because she made a promise, but she doesn’t want a miserable, loveless future for his daughter, nor his partner. This was nice, as it continued to make West a wise and loveable father, who wasn’t just refusing to give Eddie his blessing because he’s paranoid or being a dick about Eddie being his partner.

Right as Eddie is about to propose however, he’s whisked away by Reverse Flash, who reveals to Eddie that he is actually Eddie’s descendant, Eobard Thawne. Theoretically, if Eddie proposes to Iris, it would threaten the existence of Eobard in the future, so Eobard took out Eddie as what he calls an, “Insurance policy.” That can’t mean good things for Eddie. Making matters worse is that The Flash goes to make sure Iris is alright, and right as he speeds away, an electrical reaction triggers Iris’ memory of the alternate timeline, where Barry exposed his identity as The Flash to her. Thus, Iris realizes that Barry is The Flash. I guess she was bound not to stay in the dark forever, especially when it’s revealed at the start of the episode that Iris was the one who wrote the article about The Flash’s disappearance in 2024, and also married Barry in the future, as in DC lore.

The Flash wonderfully laid out the pieces for an ultra-exciting final few episodes of the season in “The Trap.” With Wells now officially pitted against his partners as Reverse Flash, and Iris once again learning Barry’s true identity, things are definitely about to go down as our first year in Central City draws to a close!

The Flash 1.20: "The Trap" Review
The Flash delivered another excellent lead-in to the end of the season this week, with Wells officially abandoning his identity at S.T.A.R. Labs, Iris yet again learning who The Flash really is, and Eddie finding his heart's desire ending in surprising tragedy.
THE GOOD STUFF
2015-04-29
96%Overall Score
Reader Rating: (2 Votes)
95%