Nintendo has just announced on Twitter that owners of Super Smash Bros. for Nintendo 3DS and/or Super Smash Bros. for Wii U will be able to add a new challenger to their roster very soon! After being announced shortly after a date was cemented for DLC fighter, Mewtwo, which was awarded free to Club Nintendo members that purchased and registered both the 3DS and Wii U variations of the mascot brawler, Lucas has now been confirmed to launch for paid download on Sunday, June 14th. This places his release two days ahead of Nintendo’s digital E3 keynote, which will air online on Tuesday, June 16th, at 12:00 P.M. EST. 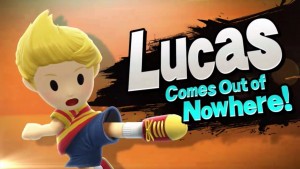 Lucas is the protagonist of Mother 3, the Game Boy Advance sequel to cult classic Super NES RPG, Earthbound. Mother 3 has still not been made available outside of Japan, and nor has the series’ original NES offering, Mother (Earthbound is Mother 2 in Japan), despite incessant fan demand from Western gamers, and the fact that Mother was given a full English translation in-house at Nintendo, before being halted from public release in the West. A fan-made translation exists for ROM copies of Mother 3, but currently, this is the only way for English-speaking audiences to enjoy the RPG adventure that Lucas starred in.

Lucas was a playable fighter in the default roster of the Super Smash Bros. series’ previous release, Super Smash Bros. Brawl on Wii, though was originally left out of Super Smash Bros. for Nintendo 3DS and Super Smash Bros. for Wii U, largely due to being a very similar variant of series mainstay, Ness, who is the protagonist of Earthbound. Despite that however, fan demand pressured Nintendo to include Lucas as DLC in their latest duo of mascot brawlers, along with allowing people to fill out ballots on the Super Smash Bros. website if they wish to petition for more DLC characters. This has resulted in fan campaigns to amass votes for fan-favourite characters like Dragon Ball Z protagonist, Goku, the cut Nintendo duo, Ice Climbers, and WayForward’s half-genie indie game heroine, Shantae, among others. 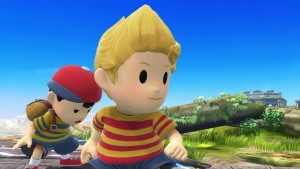 Nintendo has also claimed that they plan to make an Amiibo figure of Lucas in future, now that he has been made into a DLC fighter for Super Smash Bros. for Nintendo 3DS and Super Smash Bros. for Wii U. Nintendo just recently released Wave 4 of the Super Smash Bros. Amiibo set, which included Lucas’ fellow Mother series hero, Ness as one of its figures. On top of being exclusively sold at Gamestop/EB Games in very limited quantities however, the Ness Amiibo has become extremely rare, already commanding prices over $100 in second-hand online sales, and among scalpers.

Lucas currently has no price set, though if Mewtwo’s asking price is any indication for those who didn’t take advantage of the Club Nintendo offer, he will likely be $3.99 to download for the individual 3DS or Wii U game, or $4.99 to download for both simultaneously.

Keep smashing Eggplante for all news and updates on the Super Smash Bros. games.