Recent rumours that Ben Affleck was in talks to oversee the planned solo Batman movie himself appear to have been true. Official Hollywood source, Variety has broken the scoop that Affleck is in talks with Warner Bros. and DC Entertainment to not only direct the proposed solo Batman movie, starring Affleck’s own upcoming version of the Caped Crusader, but also co-write it, alongside DC’s Chief Creative Officer, Geoff Johns.

The earlier rumblings that preceded Variety’s scoop claimed that the solo Batman movie is titled The Batman, and will delve into the character’s career in Gotham City after coming into contact with his fellow DC heroes within the DC Cinematic Universe. Variety seems to echo this claim, stating that the movie will reflect Batman’s reaction to characters like Superman and Wonder Woman, and how this changes his superhero habits in his familiar stomping grounds. Previous claims from DC Cinematic Universe godfather, Zack Snyder also fall in line with this report, where he claims that the DCCU’s more grizzled and aged Batman has been operating as a largely unknown urban legend for decades by the time Henry Cavill’s DCCU Superman surfaces, staying outside of the public eye until his confrontation with the Last Son of Krypton.

Affleck and Johns are said to be highly in sync with The Batman’s script, if that’s indeed what the movie is called, and could have a first draft done potentially by the end of the Summer, which Affleck is apparently aiming to crank out before starting production on his next directorial project, Dennis Lehane novel adaptation, Live by Night. After Live by Night, Affleck will then have to immediately suit up again as Batman, where he’s expected to appear alongside all of the flagship DCCU superheroes in 2017’s Justice League: Part One.

We’ll get our first proper look at Ben Affleck’s Batman in next year’s Batman v Superman: Dawn of Justice, where he’ll square off against Henry Cavill’s Superman, previously pioneered in 2013’s Man of Steel, on March 25th, 2016. Affleck was also confirmed by set infiltrators to be reprising his role in a cameo part in 2016’s other DCCU movie offering, Suicide Squad, which is scheduled for August 5th, 2016, and will feature multiple Batman villains amongst its ensemble cast, including the Dark Knight’s arch-nemesis, The Joker, who will be portrayed by Jared Leto, alongside Margot Robbie as the first-ever big screen incarnation as The Joker’s lover and lead accomplice, Harley Quinn. 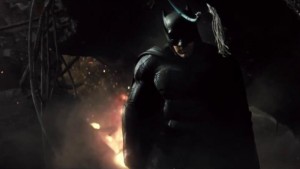 After Warner Bros. announced their DC Cinematic Universe movie slate through to 2020 last year, they also confirmed development on new solo movies centering on not only Ben Affleck’s Batman, but also Henry Cavill’s Superman. The solo Superman follow-up seems to be progressing slower than the solo Batman movie at this point, with Superman actor, Henry Cavill also saying that movement has been small on the new Superman movie, though both projects are still without release dates. With movement appearing to amp up on this new Batman movie however, it’s possible that the Batman flick may end up taking the date of a former DC movie, similar to Marvel bumping their release schedule to make way for the new MCU-set Spider-Man movie in 2017 after Sony Pictures finally inked a deal to share the rights with them. That would no doubt require an insane amount of commitment from Affleck however, as he would need to balance appearing in the two Justice League movies and the Batman movie without much of a break.

It’s possible that Warner Bros. may formally announce the release plans for this solo Batman movie during their San Diego Comic-Con keynote tomorrow. Regardless, said keynote will be held at 10:30 A.M. PST/1:30 P.M. EST, so watch this space for updates on the DC Cinematic Universe, and upcoming Batman movie projects.