Shortly after Microsoft revealed the free Games with Gold rewards for Xbox platforms this August, Sony has now chimed in with the six freebies that PlayStation Plus members can redeem next month. 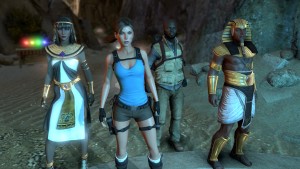 The new PlayStation Plus games will go live next Tuesday, August 4th, replacing the current July catalogue. Thus, if you have yet to redeem Rocket League, Styx: Master of Shadows, MouseCraft, Entwined, Rain and/or Geometry Wars 3: Dimensions Evolved, you have until this coming Tuesday to do so, before they return to their original paid pricing. As usual, you must have and maintain an active PlayStation Plus membership to both redeem and play any free game rewards on any platform, at any time.

Without further ado then, let’s lay out the freebies that PlayStation Plus members can look forward to in August:

First, for PlayStation 4, Lara Croft and the Temple of Osiris can be redeemed. This co-operative, arcade-style shoot ’em up combines bite-sized helpings of the puzzles and exploration of Tomb Raider, with fast-paced combat against swarms of enemies, which can be taken on solo, or with up to three other players online. The game involves Lara and her archaeologist partner, Carter accidentally unleashing the evil Egyptian god, Set, and having to team up with fellow Egyptian gods, Isis and Horus to re-assemble the scattered body parts of Osiris, in order to return Set to the underworld, before the world is destroyed. Lara Croft and the Temple of Osiris received merely lukewarm feedback upon its initial release, and we even reviewed it similarly, scoring it a 70%, praising the fun co-op gameplay, but criticizing the uninspired stage design and short length. Lara Croft and the Temple of Osiris is also available for PC and Xbox One.

The second PlayStation 4 reward for August is Limbo, which most recently came to PlayStation 4 this past February. A punishing puzzle-platformer, Limbo tasks you with leading a young boy through a dark, dangerous underworld in order to rescue his sister. The game has been immensely acclaimed since its initial release in 2010, being praised as one of the most beloved indie games of our generation. Aside from PlayStation 4, Limbo is also available for Xbox 360, PlayStation 3, PC, Mac, PlayStation Vita, iOS, Linux, SteamOS, Xbox One, and Android.

The second PlayStation 3 reward for August will be God of War: Ascension. The PlayStation 3-exclusive prequel and most recent canonical entry for the God of War franchise, God of War: Ascension involves Kratos in his earliest days as servant to Ares, hunting the Furies after they torment him upon his breaking of his blood oath to the God of War. The game also boasts the first-ever multiplayer mode in the series, where players can pledge allegiance to one of four gods, and then engage in brutal battles with one another for divine supremacy. God of War: Ascension received good reviews in regards to its main single-player component, though its multiplayer mode was criticized for being tacked-on and unnecessary.

Lastly, the second PlayStation Vita reward for August will be Sound Shapes. A platformer with a musical twist, players use both the buttons, along with the Touch Screen and Rear Touch Pad, to navigate obstacles derived from the beat and compositions of various songs. The game received positive reviews upon its initial release in 2012, praised for its creative design and enjoyable soundtrack. Sound Shapes is also available for PlayStation 4 and PlayStation 3, and better still, it’s cross-buy between all of the current PlayStation platforms, so redeeming this reward on any platform will net you the other two versions for free as well!

This is a slightly better month than the rather weak selection of July, even though Rocket League did end up being quite the popular offering. Regardless, the game selection for PlayStation Plus members this August is generally stronger, consisting of a better and more varied selection of games on offer. PlayStation Plus members with PlayStation 4’s may have already played Limbo on another platform already, but it’s still a great game that’s well worth experiencing again for free, even if it is a bit better than the good, but not great Lara Croft and the Temple of Osiris.

Likewise, Stealth Inc. 2: A Game of Clones and Sound Shapes are strong PlayStation Vita offerings that further shine thanks to cross-buy, and even PlayStation 3 gamers are getting spoiled with God of War: Ascension, even though CastleStorm is kind of a weak reward, especially since CastleStorm: Definitive Edition was a free Games with Gold reward on Xbox One recently. At least CastleStorm is cross-buy though, and the fact that you can take it on the go via PlayStation Vita should hopefully give it a slight edge, if you own both of those platforms.