For a little while, it didn’t look like Wachowski Siblings/J. Michael Straczysnki collaboration Netflix series, Sense8 was coming back. The series’ first season debuted in early June, and Netflix has been mum about whether it was renewed or cancelled ever since. 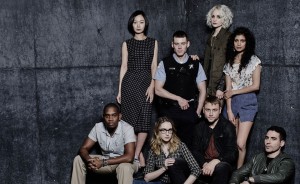 Fortunately, after “cautious optimism” from the showrunners, we now have confirmation that Netflix has given a delayed renewal notice for Sense8, so the sci-fi drama series will be returning next year, presumably in June once again. This seems to have come down to the wire, since the first season received mixed critical reviews and somewhat underwhelming viewship overall, with our own review of Sense8’s first season culminating in a lukewarm 62% score. While we praised the concept and performances, we criticized the very slow pacing and obnoxious, overwrought symbolism, declaring the series inspired, but too inaccessible and boring in its first batch of episodes.

Obviously, it’s unknown at this point what kind of storylines Season Two will entail, or how many of the original actors may or may not return. The vague ending of the first season could possibly indicate that a new batch of protagonists may be featured in Season Two, though this isn’t guaranteed, and naturally isn’t confirmed by Netflix or the showrunners.

Sense8 centers on a group of eight people across the world, who suddenly find themselves part of a ‘Sensate Cluster’, allowing them to tap into each other’s skillsets to dodge the pursuit of a sinister organization that’s hunting them, even if it also means sharing emotion, pleasure, pain, and the reactions to each other’s experiences all the while. The series has been compared to NBC’s formerly-cancelled, but now returning superhuman drama, Heroes, in terms of its style and progression.

Keep sensing Eggplante for all news and updates on Sense8.