Not long after ultra-rare event Pokemon, Diancie was offered for a weekend to anyone who owned Pokemon Omega Ruby and/or Pokemon Alpha Sapphire, and had their 3DS/2DS handheld hooked up to the internet, Nintendo is already offering another free Pokemon that is nigh on impossible to attain any other way! This time, a Shiny Rayquaza is the prize, and between now and September 14th, a far more generous deadline than the rather tight window to snag Diancie from July, owners of Pokemon Omega Ruby and/or Pokemon Alpha Sapphire can score the very valuable (and powerful!) legendary Pokemon with a few simple steps, so long as they have an internet connection. 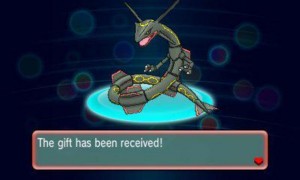 The usual laid-back requirements are in place, namely that players not have maxed out their count of Wonder Cards that are given to commemorate specially distributed Pokemon events (though having too many Wonder Cards should be impossible at this point), and that they have at least attained the Pokedex in their save file, which happens very early on in your adventure, so that’s no big deal. If those conditions are met, players can start up the game, and go into the Mystery Gift section of the startup menu after the title screen, where they need only connect their 3DS/2DS to the internet, then choose to ‘Redeem a Gift Online’. Obviously, make sure your battery life is charged to avoid the handheld shutting off unexpectedly, then start your game up, talk to the delivery lady in any Pokemon Center across Hoenn, and voila! Shiny Rayquaza is yours, free of charge!

As with Diancie, this promotion is only being offered for Pokemon Omega Ruby and Pokemon Alpha Sapphire. Sadly, Shiny Rayquaza can’t be redeemed in a copy of Pokemon X or Pokemon Y, though you can trade the Pokemon to the new sixth-generation titles, if you have multiple 3DS/2DS handhelds, or at least subscribe to the Pokemon Bank storage service. 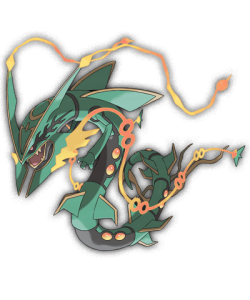 Unlike Diancie, the Dragon/Flying-type Rayquaza is catchable in normal gameplay of Pokemon Omega Ruby and Pokemon Alpha Sapphire, during a special sequence called the ‘Delta Episode’, where it’s located at the Sky Pillar, as a one-of-a-kind legendary Pokemon. The Rayquaza being offered by Nintendo is a Shiny Rayquaza however, with Shiny Pokemon being extremely rare Pokemon that have a different colour palette than usual, and sparkle when unleashed into combat. This gift Rayquaza also comes at level 70, inhabits a Cherish Ball, and has the enigmatic Original Trainer, Galileo. It also carries a Classic Ribbon, is holding a Dragon Fang, has the innate ability, Air Lock, and knows the moves, Dragon Claw, ExtremeSpeed, Dragon Dance, and, most importantly, Dragon Ascent, which allows it to Mega Evolve into Mega Rayquaza, making it enormously powerful!

Keep storming Eggplante for all news and updates on the Pokemon games, and all related promotions.