An interesting report has surfaced from The Tracking Board, which claims to have some insider information on future developments in DC’s shared movie universe, which will begin properly developing next year with Batman v Superman: Dawn of Justice and Suicide Squad. Apparently, Warner Bros. and DC Entertainment are in the early planning stages of a movie that would see a team-up between two fan-favourite DC superheroes, the time-traveling Booster Gold, and the Egyptian enchantment-powered Blue Beetle. The movie is apparently being pitched as a buddy cop movie with superheroes, and will be more comedic in tone than most other installments in DC’s movie universe.

The Tracking Board claims that Greg Berlanti, the mastermind behind The CW’s highly successful DC Comics-inspired television shows, Arrow and The Flash, their upcoming 2016 spin-off series, Legends of Tomorrow, and CBS’ upcoming Supergirl series that will premiere in the Fall, is being tapped to direct the Booster Gold/Blue Beetle team-up movie, which will come from a script written by The Incredible Hulk scribe, Zak Penn. This project might also explain why Berlanti’s crew was vetoed from using Blue Beetle in the television space at the last second, whose Ted Kord incarnation was teased several times during the second season of Arrow. Originally, Kord was supposed to appear as a new love interest and boss for Felicity Smoak in Season Three, as well as the new owner of Queen Consolidated, but after DC barred him from television in the eleventh hour, the character was re-worked into Ray Palmer, who becomes size-changing DC hero, The Atom instead. This heavily altered version of Ray will be one of the leads in next year’s Legends of Tomorrow series.

Presumably, this team-up movie would be a long way off, assuming the scoop is real, since Warner Bros. has already mapped out their shared DC Cinematic Universe movie plans through to 2020, with two movie releases per year through to that point so far, starting in 2016. Mind you, there are other movies in development from DC that have yet to receive release dates, including Justice League Dark, an ensemble movie about DC’s occult and magical heroes, a standalone Batman movie that’s apparently going to be directed by Batman actor, Ben Affleck himself, rumoured to be titled ‘The Batman‘, and a direct Superman-centric sequel to Man of Steel. There’s also titles from DC’s separate Vertigo imprint of graphic novels that are planned to be turned into movies soon, including the long-in-development Sandman, and recently confirmed Tom Hardy vehicle, 100 Bullets. Obviously, this is before potential interest in sequels to movies like Suicide Squad, Wonder Woman, The Flash, Aquaman, Cyborg and Green Lantern Corps. to boot, which will no doubt be ordered if those movies are as successful as hoped.

Of course, neither Warner Bros. nor DC has verified these plans at this point, and there are a few reasons to be skeptical about this report. The points of contention mainly come from the apparent choice of writer and director. Berlanti is a powerhouse on television right now, even expanding beyond the DC Universe this season with shows like NBC’s Blindspot, but that’s just it; Television is a massive commitment, especially for DC shows! DC would really need to get a smooth production schedule together for the movie, especially since it wouldn’t make sense for them to want to undermine themselves in the TV space by stealing Berlanti’s attention away from shows like The Flash and Supergirl, when they could just hire a dedicated movie director with a lot less hassle. 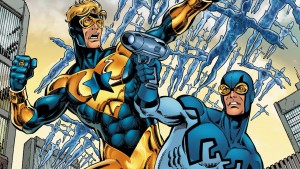 Zak Penn’s apparent involvement also seems odd. His credits include involvements in the story work for X2: X-Men United, X-Men: The Last Stand, Elektra, 2005’s Fantastic Four movie, The Incredible Hulk, and The Avengers. What’s wrong with that picture? Obviously, Penn is very, very affiliated with Marvel at this point, and is frankly not attached to many better Marvel movies, plus, as Mark Millar has proven when he was rejected as a Man of Steel writer on this basis, DC is skittish about hiring people that are heavily affiliated with Marvel, and obviously, the opposite is understandably true as well. Penn could just be handling a basic story treatment that will be revised by other, more DC-friendly writers, but even so, DC hiring Penn for a major blockbuster like this team-up movie doesn’t really make much sense on paper.

Still, even if some of the information turns out to be faulty, the movie may indeed be a real pitch that’s being kicked around in the Warner Bros. and DC Entertainment offices right now. Both parties have expressed interest in making movies about Blue Beetle and Booster Gold in the past, though Berlanti has also teased having Booster Gold on The Flash, the TV series at some point, which might bar him from the movie space. Those plans may have changed though, since it obviously wouldn’t be the first time that DC has vetoed a plan to feature a certain character on a TV series, on account of wanting to reserve them for a movie.

Would you like to see a movie where Blue Beetle and Booster Gold team up? Would you rather that they simply stayed in their own self-contained movies? Do you not care if this movie exists or not? As usual, your comments are welcome below.

Keep traveling to Eggplante for all news and updates on DC’s movie universe.