Hyrule Warriors, a game that launched for Wii U last year, is already a very ambitious ordeal to migrate to the handheld 3DS platform. It looks like the cost of that ambition might be affecting some of the older handhelds’ key incentive as well, as revealed in a Japanese interview with the game’s producer, Yosuke Hayashi, translated by PerfectlyNintendo, after initially speaking to 4Gamer. 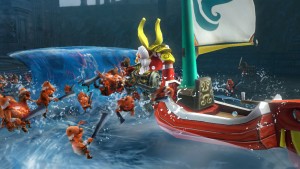 Hayashi revealed in the interview that Hyrule Warriors: Legends is incapable of displaying in 3D on older 3DS and 3DS XL models. Obviously, this is of no consequence to 2DS users, who don’t have the option of a 3D display to begin with, but it may come as a disappointment to those who are still relying on the classic 3DS or 3DS XL handhelds, and enjoy playing games in 3D.

Hayashi seems to claim that the reason for disabling 3D was to keep the game’s performance stable on the older 3DS and 3DS XL models, which would naturally be strained quite a bit by trying to render a fast-paced action game that was originally designed for the Wii U.

Fortunately, if you’ve already upgraded to a New 3DS XL, or perhaps plan to adopt the smaller New 3DS model after it launches in the Animal Crossing: Happy Home Designer bundle this Friday, you won’t be affected by this compromise. Hyrule Warriors: Legends will display in 3D just fine on the New 3DS and New 3DS XL models, if you opt to activate the 3D Slider. This is because the improved processors in the New 3DS and New 3DS XL handhelds can more easily handle on-the-fly visual rendering and framerate stability, so the 3D effect in Hyrule Warriors: Legends didn’t need to be removed in that case. 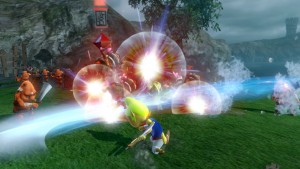 Inspired by Tecmo Koei’s successful line of Warriors games, and put together with the assistance of Tecmo Koei and Team Ninja, Hyrule Warriors: Legends brings the hit Wii U action game, Hyrule Warriors to the 3DS library, allowing you to take control of characters from across the Legend of Zelda franchise, with some new faces thrown in as well, to take on hordes of classic Legend of Zelda monsters in action-packed hack-and-slash combat. The 3DS port will include all-new personalities from The Legend of Zelda: The Wind Waker as well, including Tetra, Toon Link and the King of Red Lions, all of whom can then be used in the Wii U game if you own both platforms, both ports of Hyrule Warriors, and perform a simple data transfer.

Keep slashing up Eggplante for all news and updates on Hyrule Warriors.