After announcing an open beta for highly anticipated multiplayer shooter, Star Wars: Battlefront, EA has now confirmed when you can participate. All three platforms will host the online multiplayer beta for the game between October 8th and October 12th. All you need to do is download the free Star Wars: Battlefront beta client from Origin, the PlayStation Store, or the Xbox Games Store between those dates, and enjoy! 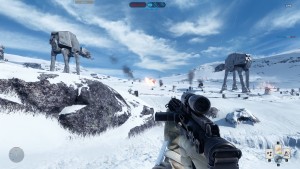 The beta will include three different sections, comprising a huge 40-player battle on Hoth, an 8-vs.-8 Territories-style battle on Sullust, and a Survival/Firefight section on Tatooine, which can be played either by oneself, or with a friend.

The Hoth mission will have players on the Rebel Alliance side aiming to call in Y-Wing Bombers to destroy an oncoming force of Imperial AT-AT Walkers. Those fighting on the side of the Imperials will make use of the Walkers to lay waste to Rebel forces. On Sullust meanwhile, the two teams of eight players will battle for control over a series of dropping escape pods. Finally, on Tatooine, your job is to hold off waves of Imperial forces, including TIE Fighters, AT-ST’s and Elite Stormtroopers, for as long as possible.

Obviously, the full game will feature more variations and more play modes. Those who pre-order will also get a weeks’ worth of early access to the first DLC expansion, The Battle of Jakku on December 1st, before it releases to the public on December 8th, with the planet, Jakku set to be featured in this December’s big screen movie release, Star Wars: The Force Awakens. 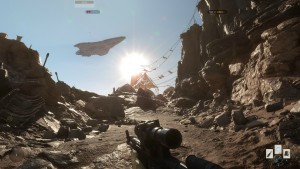 The rest of the game will allow players to experience the large-scale battles of the original Star Wars trilogy, in skirmishes both large and small, in first-person shooter-style combat reminiscent of developer, DICE’s Battlefield games. While primarily being marketed for PlayStation 4, where it will also come in a bundle with a special Darth Vader-emblazoned PlayStation 4 console, EA Access members on Xbox One will be able to play Star Wars: Battlefront several days ahead of its public release date.

Star Wars: Battlefront launches for PC, PlayStation 4 and Xbox One on November 17th of this year.

Keep mobilizing Eggplante for all news and updates on Star Wars video games.