NOTE: Full spoilers for this episode of Heroes Reborn, including a major character death from the main Heroes series, are present in this review

Heroes Reborn’s first premiere episode was a pretty considerable disappointment, and as for its second premiere episode… It’s marginally better. Marginally. The blunt truth however is that Heroes Reborn still isn’t doing enough to generate interest and maintain the attention of Heroes viewers both new and old, despite “Odessa” at least going to a few more interesting places than “Brave New World”, and even managing a decent twist or two this time.

The episode begins with Noah washing the blood of Rene the Haitian off of his hands at a truck stop, after accidentally killing him at the conclusion of the first premiere episode. Noah then decides to bail Quentin out of jail, despite putting him there to begin with, believing that Quentin may have been on to something about Primatech, clearly.

Meanwhile, the various other characters pick up immediately where they left off. The biggest surprise comes from Luke and Joanne, who have been banished to the eerie, enclosed room that Tommy vaguely remembers from his childhood. With bulletproof walls and no exit, the two ponder their next move, complete with Luke wondering aloud if they’re in Hell, and maybe they deserve that fate, something that Joanne scoffs at. This really seems like Heroes Reborn is tipping its hand, and blatantly giving away that Luke is going to turn on Joanne eventually. Maybe that won’t be the case, but the show definitely isn’t being subtle about the fact that Luke probably won’t want to stay on the dark side for very long. Maybe that’s why Zachary Levi is somehow turning in one of the sleepiest performances of his career here.

As for the other leads, Tommy is discussing his abilities with Emily, who assures him that he’s not vanishing things into thin air. Tommy is caught warping away a flower to demonstrate how his ability feels to Emily by her boyfriend however, with the boyfriend then threatening to turn Tommy in. At least this starts one of the episode’s better plots, though it’s not long before it returns to the insanity of Ren and Miko.

Ren visits Miko, hoping to apologize for barging in to her apartment, only to find that Miko is trapped in Evernow, and Ren has to help her fight off some samurai with his super-capable character. Yes, these two didn’t suddenly start making sense, and I can’t say I’m surprised. Also, I don’t think Heroes Reborn quite grasps how video games work. Just saying. Anyway, Miko runs off to find her father, who is somehow trapped in the game, and then Ren helps her fight off some Samurai… People… Or NPC’s… Or something, with his avatar. I swear, it’s like this part was guest-directed by someone at Nickelodeon! It definitely doesn’t seem to fit into the sensibilities of the Heroes universe so far.

Miko eventually makes her way to Yamagato Tower, a mysterious place where her father was somehow warped to, with Ren guiding her along, she fights off a few more guards in the real world building, and, that’s it. That’s actually where they abruptly end the episode, which is a weird place to conclude it. Again, more questions without answers. I get that the show needs to find ways to keep people watching, but the way that this show is going, it’s just operating more on conceit than true engagement so far. When Heroes Reborn keeps assuming people will just want to see what happens next, even as they stop plot threads prematurely for want of future episodes, it leads to the show feeling too slow-paced and disjointed. Like I said in my previous review, it basically signals that Heroes still isn’t learning from its former mistakes, and that’s a big problem.

Regardless, checking in with Carlos, he has a talk with his father about the death of his brother, and, nothing much happens with him, again. Carlos clearly has some part to play in the larger story, but right now, he’s still mostly taking up runtime. I assume that he’ll don his brother’s vigilante mantle eventually, but at this point, Heroes Reborn is acting like he doesn’t even have powers. It would be strange if he didn’t, since his brother, father and nephew all possess them, but so far, Carlos feels like he belongs in a different show. That will probably change soon, but it’s disappointing that he’s probably the slowest character to find his footing in Heroes Reborn for now.

Towards the end of the episode, Carlos is commissioned by his father, who apparently knew his brother’s secret, to smuggle two runaway evos into Canada, since his brother apparently ran an ‘Underground Railroad’ for evos. So, what, Canada is the only country in the world that doesn’t allow you to kill people in the street for having powers? How does going to Canada somehow make these people safe? This is yet more information that Heroes Reborn is failing to adequately explain, especially since the whole world is supposed to be terrified of evos at this point. I’m Canadian myself, and I can guarantee you that, while Canadians are definitely a friendly people compared to many nations, they’re not so friendly as to be the only people that wouldn’t hate and fear evos. Canada is a wonderful place, but it’s not that forgiving!

Anyway, like I said, Tommy once again has the highlight story this week, after his bully brings him to his house, and demands that Tommy make his abusive stepfather disappear. Again, this is actually a well-executed story arc that feels dramatic and engaging, especially when Tommy inevitably wimps out, and runs off, despite the guy clearly being an asshole that probably deserves to be, “Warped into a volcano.” Tommy is nonetheless saved however by the mysterious penny man from the first premiere episode, who makes the stepfather disappear for him. Yeah, the penny man’s powers really aren’t clear at this point, but at least he’s one of the show’s more intriguing characters for now. Thankful for the act that Tommy didn’t do, his former bully then becomes his best friend. 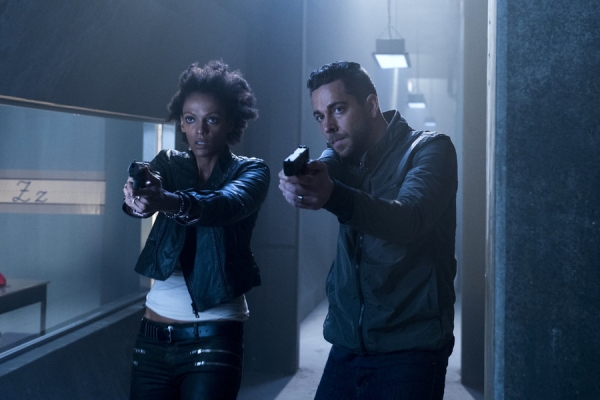 Noah and Quentin then decide to revisit the ruins of the Primatech facility, a place that should be quite recognizable to returning fans of Heroes. Here, they discover evidence that Primatech front, Renautus is continuing to gather intelligence on evos, and that Claire’s death, surprise, may not be as cut-and-dry as Noah thought it was. Noah decides that his next move is finding Molly Walker, another personality that should be familiar to returning Heroes fans.

Guess who else happens to be hanging around? Luke and Joanne! Apparently, Tommy was held in Level Five, a key part of the ‘Villains’ Volume from Heroes’ third season. Luke and Joanne manage to escape confinement from Level Five, and then stupidly shoot up an entire room of innocent Renautus technicians for seemingly no reason. Oh for God’s sake! We get it, Heroes Reborn. They’re not nice people!

Again, this just begs the question of how these trigger-happy idiots haven’t been caught by the police yet. They didn’t even bother to clean up this particular scene! Yes, the Renautus work is supposed to be secret, but as we’ve seen with Noah in the main Heroes series, these people still have civilian lives and families, and there’s still going to be plenty of people wanting justice for their dead loved ones! This is just senseless, and it feels like a lazy way for the writers to deny Noah information that would have been very easy to attain otherwise. Moreover, how the hell did these two get enough bullets to shoot up a room after Luke shoots out the lights to see how they can escape, and Joanne idiotically unloads into a wall, thinking that will somehow help?! On top of that, how did they so easily steal Noah’s car to get away afterward?! Did he leave the keys in it, or are these two just the world’s fastest hot-wirers?! Lastly, why did they wound Quentin instead of kill him, if they clearly just kill everyone for no reason like morons?! This is all just lazy writing, Heroes Reborn! Come on!

From here, we meet a new character, Zoe, who is hooking up with a high roller in an underground casino that has banned evos. That’s not actually how it goes down however, after Zoe announces that she works for the casino and is trying to bust the guy. She nearly gets suffocated by his telekinetic powers as a result, and is hurried away by a mysterious woman after her attacker is clonked on the head by a bystander. The woman who saves Zoe talks to her for a bit, then Zoe gets drugged, and… Ends up in the same room with the man again?

Yes, the woman and the telekinetic are accomplices, but why labour under the pretense of getting a drink with Zoe after the guy nearly kills her? Moreover, if you wanted Zoe, why would the guy try and nearly kill her in the first place, particularly in a hallway where anyone could see it?! In fact, two people do see it, thus prompting the con man’s accomplice to swoop in and whisk Zoe off in the first place! What the hell kind of plan is this?! Moreover, if these two are some sort of professionals, why are they drawing so much attention to themselves?! The man is clearly a dumbass for being so reckless, and the whole backstory moment with the woman is moot anyway, since both parties quite likely lied about a good chunk of the information, after Zoe is soon after unmasked as Molly Walker!

Ok, putting aside the fact that formerly helpless, sweet-natured Molly is now a knife-throwing badass for literally no reason (this personality shift and skillset is yet another gaping plot hole created by the time gap), this is mostly a decent twist. It’s just too bad that it came within a storyline that is so sloppily written, and, for the umpteenth time, raises a bunch of questions that the miniseries doesn’t bother to answer about the characters and situations involved. We also learn that Molly’s power is the key to driving… Some sort of plan by Renautus that the show naturally isn’t explaining yet, but it’s doubtful that most new viewers especially will care at this point.

Heroes Reborn is very slowly inching forward, but it’s still largely stumbling on the same bad writing, plodding pacing and inability to feel like it’s actually going somewhere in its initial stages. The miniseries needs a lot of work if it’s going to redeem Heroes in the end, and frankly, the show almost seems to be treating itself like a Netflix-style event series meant for binge-watching, which, for a syndicated miniseries airing on a major network, is very unwise when it comes to holding the attention of all but the most devout of Heroes fans.

Frankly, this big premiere was a bust. Heroes Reborn may coax back viewers if the plot improves, but at this point, I doubt there’s going to be much demand for Heroes to ever return after this miniseries has wrapped. Like I said, it’s a series of diminishing returns that was obviously cancelled for a reason.

Heroes Reborn Episode 2: "Odessa" Review
Heroes Reborn's second premiere episode was a bit more interesting than its first, but it still suffers from the same problematic writing, conceited tone and lack of feeling like it's actually going somewhere in its early episodes.
THE GOOD STUFF
THE NOT-SO-GOOD STUFF
2015-09-26
60%Overall Score
Reader Rating: (0 Votes)
0%