After the big rush of events from the previous two episodes of Season Nine, The Big Bang Theory relaxed a bit this week, to offer two branching storylines for the guys and the girls that delivered reliable shenanigans for both sides. The episode’s events were mostly just light-hearted silliness that was completely dropped at the end, despite the show teasing big developments later with Penny and Amy, but this was still a good episode with a good share of laughs overall.

The episode begins with Howard and Raj entering Leonard’s apartment, and announcing plans to kidnap him. Apparently, they noticed that Leonard hastily eloping with Penny meant that he never got a real bachelor party, and they intend to fix that. They also tell Sheldon that he is being conscripted along, particularly after he makes some very funny references to how much Howard and Raj botched the kidnapping, since they don’t have a blindfold or rope. After Sheldon challenges them to get him along with Leonard, what do the two do? Tie up and blindfold Sheldon! One has to wonder how exactly they pulled this off to any realistic degree, but this was an opener so hilarious that it was easy to forgive the lack of logic, especially after Raj declares that Sheldon bit him. 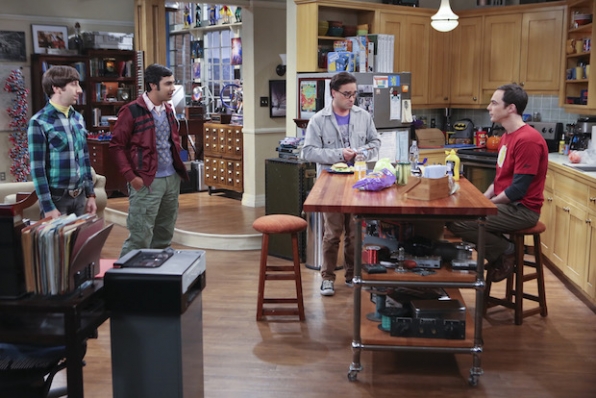 As the guys hit the road in a mysterious van, Howard and Raj announce that the van actually belongs to one of the group’s personal physics heroes, Richard Feynman. This even leads to Sheldon suddenly getting on board with the trip, despite predictably freaking out about catching Yellow Fever when he learns that the guys are traveling to Mexico. It was also very funny to see how Leonard responded to Raj’s clues about spicy food and diarrhea however, suggesting that they were going to India at first, before Raj says that it’s somewhere that they can drive, and Leonard responds by wondering if they’re going to Raj’s house. Maybe it was a low-baller, but it was amusing.

Unfortunately, the trip is for naught in the end, when the van suffers a tire breakdown, and the guys are left to try and put their heads together and fix it, far into the night. Seeing the montage of solutions and bickering was very funny, even if that’s really as far as the storyline went. Things culminated with Sheldon building some thermite and the guys sprinkling it on the busted lug nut of the tire to try and melt it off. This ends with them watching silently as the van goes up in flames, and that’s actually how their story arc ends for the episode.

While this ending was funny, it did leave an aftertaste of disappointment, since the idea of Leonard having a bachelor party post-marriage was a pretty promising one. Sadly, this didn’t come to fruition, and that felt like a cheat. Maybe the show will try again, but for now, the idea of stranding the guys on their trip to Mexico, especially after The Big Bang Theory has built episode arcs around the guys being stranded several times already, felt a little lukewarm in terms of inspiration.

Fortunately, the women got equally good jokes, and storylines that left a bit more of an impression. Finally, the show moved away from Sheldon’s perspective on his breakup with Amy, and allowed us to get Amy’s feelings and side of events. This eventually leads to Amy saying that she wants to change her wardrobe, and Penny and Bernadette constantly calling out things that they think are wrong with Amy’s fashion sense was a pretty funny result of this. Amy clarifies however that she wants to get her ears pierced. Apparently, Amy’s mother says that ear piercings are for whores, pirates and genies. Clearly, Amy’s mother has never set foot outside of her house, since female ear piercings are extremely common across the globe, but, whatever.

Surprisingly, Amy’s ear piercings at the hands of Penny goes entirely without complication (amazingly), but this leads to the news that Penny hasn’t told her family that she’s now married to Leonard. Penny is then forced to call up her father, with her mother apparently being out of the house, and say that she married Leonard in secret. Surprisingly, Penny’s father takes the news well, even if he responds by telling Penny that he accidentally killed her pet pig, and hasn’t told her for a year, which is news that devastates Penny. Bernadette and Amy only being hungry by the news was funny though.

Amy is then forced to call up her mother, and say that she broke up with Sheldon. She initially chickens out, though Penny proceeds to grab the phone and tell Amy’s mother that she got her ears pierced, dumped Sheldon, and made them eat penis cookies (since Penny also didn’t have a bachelorette party. The veins are gummi worms!). Apparently, Amy is forced to sit in Penny’s closet as punishment (though this happens off-screen), and Penny prepares to complain to Leonard as the episode ends, only to have Leonard announce that he had to spend the night with Sheldon in Mexico, to which Penny admits that Leonard’s night was worse, and that’s where the episode ends.

Again, while the girls’ storyline at least paved the way for promising future episodes later this season, it also ended with a bit of a whimper. Even the final joke of Sheldon being the ultimate insufferable issue in their lives is a canned moment that The Big Bang Theory constantly falls back on when it has no better ideas. The jokes were solid this week, but ultimately, this felt like a wind-down episode, after so much drama in the previous two. That’s fine. Some comfort food is good after a whole lot of shake-ups and gloom.

The Big Bang Theory 9.3: "The Bachelor Party Corrosion" Review
The Big Bang Theory settled into a more straightforward episode this week, providing solid laughs, though balancing on two story arcs that didn't feel all that noteworthy in the end.
THE GOOD STUFF
THE NOT-SO-GOOD STUFF
2015-10-06
80%Overall Score
Reader Rating: (0 Votes)
0%