Right on the heels of Nathan Darrow landing the role of Mr. Freeze on FOX’s hit DC Comics-inspired series, Gotham, another actor has just been cast as one of the other promised villains for the show’s currently-airing second season. None other than BD Wong, best known for playing Dr. Henry Wu in Jurassic Park, and having the distinction of being the only returning Jurassic Park personality in the franchise’s recent revival movie, Jurassic World, has won the role of Professor Hugo Strange. 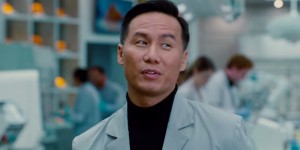 Hugo Strange is one of the earliest Batman villains to be introduced, and still featured as part of Batman’s Rogues Gallery of recurring villains today. Strange predates even classic characters like The Joker, Two-Face, The Penguin and Catwoman, making his first appearance in Detective Comics #36 in 1940, shortly before Batman would star in his own comic book series during the Golden Age of superheroes. He is a brilliant and obsessive researcher that is known for experimenting on people and turning them into monsters, usually exploiting the inmates of Arkham Asylum to this effect. Strange is also one of the only villains in DC lore who is aware that Bruce Wayne is Batman, using this knowledge to both torment, and mercilessly gather data on the Dark Knight.

Gotham’s version of Strange will be introduced as an, “Altruistic” and, “Innocent” man, according to the showrunners, who is working to rehabilitate the villains of Gotham City. He harbours a dark secret however, which will soon turn him into the city’s greatest threat. As we suspected in our most recent Gotham episode review as well, the recent revelation of Indian Hill, an Arkham Asylum-esque prototype where some of Gotham City’s baddies have been captured and experimented upon, will serve as the springboard in which the show will introduce Strange.

It’s currently unknown which episode of Gotham that Strange is set to debut in. Regardless, catch the show on Mondays at 8:00 P.M. EST, on CTV here in Canada, and FOX for our American neighbours.

Keep studying Eggplante for all news and updates on Gotham, as well as our weekly review coverage of the series.