The Walking Dead did something very interesting this week. Given the very dramatic, action-packed series of events that has sustained Season Six so far, the show made the bold decision to completely break off from the overarching plot with “Here’s Not Here”, which fills in the backstory of Morgan, and shows how he found his current path of peace.

Interestingly, this highly experimental episode format comes on the heels of ABC and Marvel’s Agents of S.H.I.E.L.D. series doing something very similar last week with “4,722 Hours”, which completely split off from the main season plot to have a self-contained backstory, filling in the question of how a lone character got to be where they are, in the interim that you didn’t see. The results of that episode were absolutely stellar, and fortunately, fellow comic book drama, The Walking Dead also achieves similarly superb results with “Here’s Not Here”, which stands as a new season high point for Season Six, so long as you can forgive the show suddenly switching gears for a week. 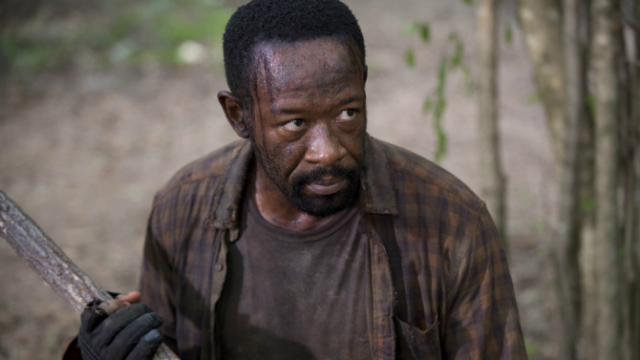 The episode begins with Morgan, who is the only returning character to appear in this entire episode, preparing to tell a story to some unseen figure. Said story begins with Morgan eking out a living in the wake of losing his wife and son, furiously killing Walkers and people alike, and anything that so much as moves near him. Morgan has become violent and unhinged, brutally stabbing one man through the throat with his crude spear, and strangling another to death with his bare hands. This Morgan is extremely removed from the Morgan that we now know, and is more in line with the Morgan that Michonne didn’t trust during his brief reunion with Rick in Season Three, during the events of “Clear”, before he returned to Alexandria, a changed man.

One day, Morgan stumbles upon a cabin, where he attempts to steal a goat, before the cabin’s owner warns him not to do it. Morgan attempts to attack the man, and is soon after knocked out, waking up in a prison cell within the cabin. The owner, played in a great guest role by John Carroll Lynch of American Horror Story, identifies himself as Eastman, and makes an attempt to try to get through to Morgan, who is traumatized, bloodthirsty, and unwilling to listen to a word that Eastman says.

The entire episode deals with these two men specifically, but the portrayal of Morgan’s journey from being consumed by grief and rage, to becoming a paragon of peace and hope, is done excellently. The transition feels very natural, especially when we soon learn that Eastman, despite being a man of peace himself, was never a saint. He’s hardly a perfect man, and, like Morgan, he’s trying to atone for a horrible, traumatic past that drove him to do something terrible, which is first teased when Eastman says he only met one truly evil person in his life. We get the sense that Eastman having a cell in his cabin is related to something unspeakable from his past, and the way that the episode gradually teases this is done flawlessly, thanks to perfect pacing, and very well-written dialogue. 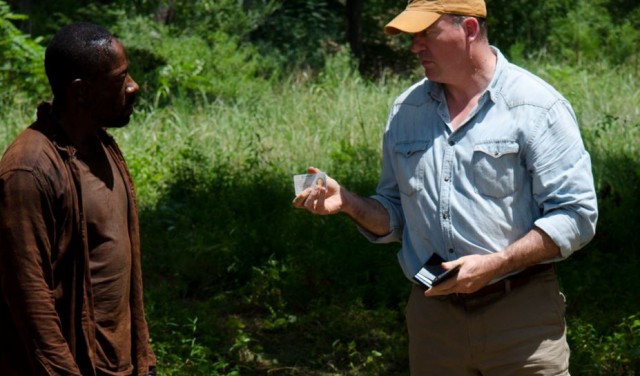 Eventually, Eastman tells Morgan that the cell was never locked, and Morgan can go or stay as he pleases, but Eastman will not allow Morgan to kill him and take his goat. Morgan attacks Eastman anyway, and is quickly subdued, eventually returning to the cell of his own volition. At this point, Morgan finally opens up a bit, and begins to bond with Eastman, even managing to work out a way of life with him, even though Eastman continually fails at making cheese from his goat’s milk. Despite that however, he never gives up trying, which is nicely symbolic of Morgan’s own attempts to claw out of a hopeless cycle of rage and despair.

As Morgan finally opens up to Eastman’s teachings, we see Eastman teach him the peaceful martial art of aikido, which is all about realizing that all life is precious, and never killing even the most evil of opponents. These teachings culminate in Morgan agreeing to take Eastman to his former killing ground for supplies, where Morgan encounters one of the men he killed, now re-animated and turned into a Walker. Morgan freezes as the Walker approaches him, forcing Eastman to step in and take care of it, getting bitten in the process.

This was the only sour note in an otherwise excellently-executed side story episode of The Walking Dead. Killing off Eastman felt unnecessary, and the way he gets bitten is incredibly contrived, especially when you consider that he’s a martial artist who can subdue a crazed Morgan, presumably among others. It might have been more satisfying if Morgan had simply left a perfectly fine Eastman and gone in peace, to spread Eastman’s teachings, which would have led him back to Rick’s crew in Alexandria just the same. Maybe John Carroll Lynch didn’t want to be called back to the series for whatever reason, but it’s a bummer that the show forced a contrived death where it really wasn’t necessary. 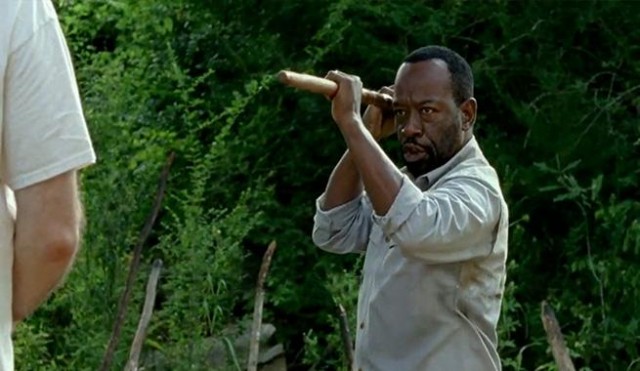 Regardless, Morgan relapses a bit, and re-sharpens the spear that Eastman had re-fashioned into a passive staff, and spears a Walker, before encountering two survivors. He silently agrees to spare them, and the survivors give him some food and a bullet as thanks. Realizing that he’s made progress, Morgan returns to Eastman, though his goat got eaten by a Walker, and Eastman is beginning to succumb to his bite. It’s here that we finally learn that Eastman did indeed kidnap and trap the one evil man that he knew, who murdered Eastman’s wife and two children back during his time as a forensic psychologist, and then slowly allowed the man to starve to death, which took forty-seven days. Eastman realized that the world had ended when he went to Atlanta to turn himself in, and realized that there was nobody left to turn himself in to. At that point, he vowed never to kill again, since torturing and killing the murderer of his family brought him no peace. Finally, Morgan’s training becomes complete.

Morgan euthanizes Eastman off-screen, and we see a grave left for him amongst the others, as Morgan walks towards Terminus, linking this side story with the first glimpse of Morgan heading towards Rick’s group at the start of Season Five. This likely places the events of this episode throughout the bulk of Season Four, and perhaps the ending portions of Season Three.

As Morgan finishes his tale, we see that he’s talking to the Wolf that the show appeared to suggest that he’d killed a couple of weeks ago, during the events of “JSS.” Morgan suggests that the Wolf could find similar redemption, but the Wolf reveals that he’s been bitten, and that was his reason for coming to Alexandria. The Wolf says that he must kill everyone in his way, even children, and that’s his own code. Morgan then leaves the man in confinement, before responding to the call to open the gate, which is likely Michonne returning to the community, after bringing back a couple of survivors from the events of “Thank You” last week.

Speaking of last week, on one last unrelated note, Steven Yeun’s name has been removed from the main credits as of this episode. This seems to further confirm that Glenn did indeed meet his end during the events of “Thank You” last week, despite so much frenzied fan speculation to the contrary. Like I said, if Glenn survives falling into a horde of Walkers while being pinned under a corpse, that is officially the point where The Walking Dead jumps the shark as far as I’m concerned, at least in its TV incarnation. 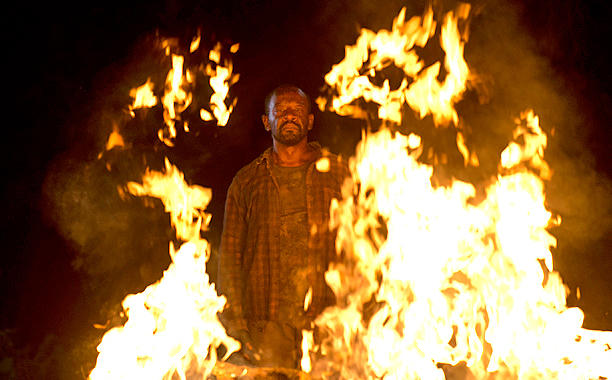 Back to “Here’s Not Here” though, this is far and away one of the best episodes of The Walking Dead to come along in a while, and a welcome break from so much high tension and death in Alexandria since the start of the season. It might seem a tad abrupt to suddenly put all of that on hold as we explore this backstory with Morgan, but if you’re willing to accept waiting an extra week to see the next part of the story there, Morgan’s backstory is one that hits all the right notes, is intelligent, emotional and satisfying, and does something very cool and unusually uplifting for this series with Morgan’s long absence.

The Walking Dead 6.4: "Here's Not Here" Review
The Walking Dead broke away from the rampant death and despair of the season so far this week, by detailing the long, uphill battle of Morgan in his quest to find peace before reuniting with Rick's crew, and in doing so, delivered one of its best episodes in a long while.
THE GOOD STUFF
THE NOT-SO-GOOD STUFF
2015-11-02
93%Overall Score
Reader Rating: (0 Votes)
0%