Supergirl had an appealing pilot episode last week, but the show really started to come into its own even better with “Stronger Together”, which provided a better balance of credible drama to go along with the uplifting action and girl power vibe.

The big strength of the episode came from further separating Supergirl from the legacy of Superman, in that it made Melissa Benoist’s latest incarnation of the character on this series into the amateur that she would predictably be, after only now tapping into her legion of powers. The episode begins with Kara participating in rigorous flight training under the tutelage of Hank Henshaw and the DEO, nonetheless insisting to Alex that she’s ready for primetime. She did successfully stop Vartox last week, but Henshaw and Alex are nonetheless pessimistic about letting Kara keep performing heroics at this point, since she is very green. 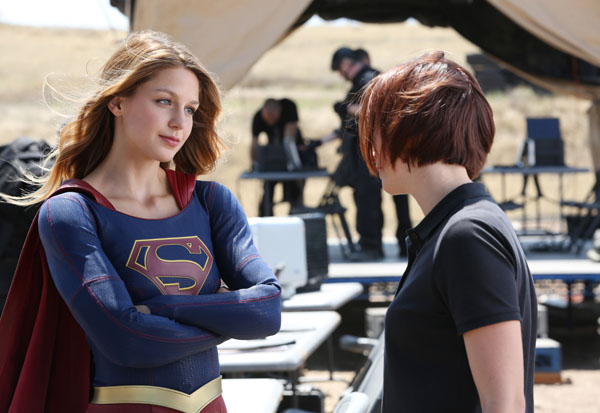 This nicely led into a scene of Winn directing Kara to a tanker fire in the National City harbour, which she fails to blow out using her Super Breath, a power she hasn’t quite mastered at this point. She then tries to move the tanker away from the fire on shore, which initially seems to work, except, she makes the mistake of pulling instead of pushing. This leads to a violent crack in the hull that results in a disastrous oil spill, creating a pretty serious ecological disaster for National City at large. Oh dear.

From here, a media nightmare spawns, as Supergirl immediately begins drawing critics who naturally question whether or not she’s actually a menace who is doing more harm than good. Yes, this is clearly a page taken from the Spider-Man playbook, but it works well here. We even get our first peek at another DC Comics villain-in-the-making for this series, Maxwell Lord, who immediately comes out as being against the presence of Supergirl. Apparently, Winn also idolizes Lord. That’s bound to come up again later, given Winn’s villainous lineage as the confirmed son of Superman villain, Toyman.

Another thing that this episode portrayed well, albeit sometimes excessively, was Kara even being reckless with her powers around the office at CatCo. She talks loudly with Winn about her superheroic acts and screw-ups, and likewise, she even uses her heat vision right in the middle of the office, with her glasses still on, to heat up Cat Grant’s coffee. Surely, there’s no way that Kara would be that careless. I get that she’s very green, and obviously hasn’t mastered hiding her identity as Supergirl yet, but, seriously?

Anyway, Cat Grant wants to get ahead of the media frenzy surrounding Supergirl, and twists James’ arm to try and get a sit-down exclusive interview with National City’s new heroine. Kara is initially against the idea, though is forced to reconsider when Cat threatens to fire James if he doesn’t get the interview by the end of the week.

Despite Cat coming off as a potential bitch here though, the episode actually did a fantastic job of balancing her out. Yes, she’s kind of a caricature of the bitchy, spoiled boss, but as with the pilot, Cat has a great scene with Kara, who yet again questions her spin on Supergirl in the media, only to have Cat nicely point out that Supergirl’s problem is that she’s trying too hard, and taking on too much, too fast. Cat even recounts her true-to-DC Comics origin, where she started as Perry White’s assistant, then wrote for the Daily Planet’s gossip column, until finally getting enough recognition and resources to start CatCo. It was a long and laborious process that she was then ready for, thanks to her many years of experience. Honestly, it was great advice, and it contributes to making Calista Flockhart’s new portrayal of Cat Grant one of the best characters on this series at this point.

Kara wisely takes the advice to heart, and tries for smaller acts of heroism, such as lifting an ambulance out of a traffic jam, or rescuing a snake from a tree that Winn thought was a kitten, which was actually a pretty funny jab at Golden Age Superman heroism. The result is Supergirl being received far more favourably by the city, though Cat hasn’t let up on the pressure with James, even as Supergirl improves as a beloved public figure.

Kara also runs into another problem, as a chemical plant ends up being attacked by one of the Fort Rozz escapees, an insect-like humanoid from a race called the Hellgrammites. Yes, this is another loose adaptation of a DC Comics villain from Superman lore, as ‘Hellgrammite’ is just one guy in DC Comics, an entomologist that turns himself into an assimilating bug beast, though on Supergirl, he’s apparently just a nameless thug for an entire race of the same name. That’s fair enough, since he’s a disposable villain-of-the-week, much like Vartox in the pilot last week. The true antagonist of the episode still felt like Kara’s Kryptonian aunt, Astra, who forces the Hellgrammite to kidnap Alex in exchange for a steady supply of chlorine chemicals that the alien apparently must consume as its only food source. 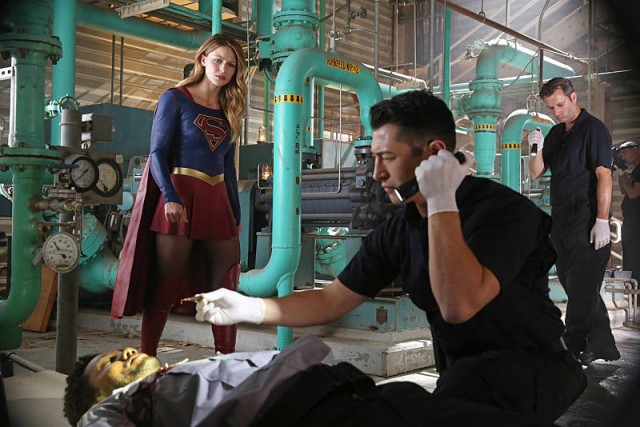 After a brief spat with Henshaw, who implies a tragic backstory that we’ll no doubt explore later, Kara locates Alex with her Super Hearing, though is attacked by Astra, who tries to coerce her into an alliance that will see Astra dominating Earth and ruling it as a new Krypton. Yes, if you’re feeling like Astra is more or less a female General Zod stand-in for Supergirl, that pretty much seems to be the case, right down to Astra holding the military rank of ‘general’. Regardless, Kara naturally refuses the offer, and this leads into a pretty solid climactic fight between Kara and Astra. Alex even has a brief scuffle with the Hellgrammite, though seems to kill him pretty quickly. Yeah, Hellgrammite is kind of crappy in this universe. Maybe the real Hellgrammite, the human entomologist, Roderick Rose from DC lore, will turn up later, and do better.

Predictably, Kara can’t seem to defeat Astra, though she’s bailed out by Henshaw, who stabs Astra with a Kryptonite dagger, forcing her to flee. Apparently, Astra’s forces have not heard of Kryptonite before, and now have to re-evaluate their plans for National City, since the humans have a weapon they didn’t anticipate. One could question this pretty easily though, since it seems very unlikely that no one on Superman’s end, not even Lex Luthor, who is inevitably having off-screen battles with the Man of Steel in the Supergirl universe, has ever wielded Kryptonite against him before. Surely, Astra must be keeping tabs on Superman. Even the Hellgrammite says something about not wanting to face someone wearing Superman’s symbol. If even the bug henchman has heard of the Man of Steel and his exploits, how has Astra not learned of Kryptonite yet?

In any case, Alex and Kara reconcile, and Kara agrees to let Alex train her, so that she can be ready for Astra next time. Henshaw has even put together a sort of replica of Superman’s Fortress of Solitude in the DEO lair, where Supergirl can interact with an A.I. construct of her mother, Alura, similar to how Superman interacts with the A.I. construct of his father, Jor-El in the Fortress of Solitude. We also get a brief flash of red eyes from Henshaw, possibly teasing that he may already be a cyborg during the events of Supergirl, as he is in his DC Comics incarnation as a deadly cybernetic villain.

The episode then ends with James telling Cat that she has the interview, as Kara lifts Cat’s car onto the roof of a building, and asks her what she wants to know. Superman was definitely gentler when he gave Lois Lane her first interview, but hey, I guess Supergirl’s dynamic with her boss is no doubt different. Oh, speaking of Lois Lane, we actually got name drops of not only Perry White, but Clark Kent and Lois Lane this episode. The show even started mentioning Superman by name, finally, even referring to him as the Man of Steel at one point! I guess CBS does have the TV rights to all of these names after all, though it’s still weird that they can’t show Superman’s likeness for now. 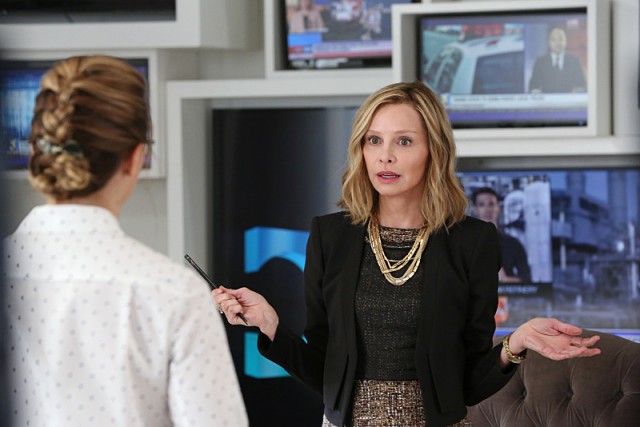 In any case, “Stronger Together” continued to elevate Supergirl’s incredible potential as a female-driven comic book drama series, namely in that it more effectively made its lead character flawed and vulnerable. The ensemble and dynamic of the show and its lead personalities is really coming together now, and overall, the storytelling feels more clever and engaging than it did in the pilot. It’s fantastic that the show seems to be so quickly carving out its niche and identity, and with Kara finally coming face-to-face with the true villain of the season, hopefully things only get more exciting from here!

Supergirl 1.2: "Stronger Together" Review
Supergirl delivered an episode even better than its pilot with its sophomore offering, "Stronger Together", which better explores the flawed, amateur nature of Melissa Benoist's lead heroine, and further improves Kara's dynamic with the rest of the lead cast.
THE GOOD STUFF
THE NOT-SO-GOOD STUFF
2015-11-03
88%Overall Score
Reader Rating: (0 Votes)
0%