Well, shoot. This is disappointing. Unfortunately, the big Zygon plot for Series Nine of Doctor Who ultimately ended up being the low point of the otherwise strong Series Nine offerings so far, with its second half, “The Zygon Inversion”, ultimately failing to deliver an interesting or even logical conclusion for the most part. This leads to a wasted concept that didn’t seem to accomplish anything, beyond one annoying retcon, and a whole lot of shrugging at what should be a pretty big event for Earth.

Picking up where last week left off, naturally, The Doctor and Osgood escape the rocket that blew up the presidential plane, which was apparently diverted from course initially by Clara, in a convenient removal of the full scene that, honestly, felt a bit lazy. Apparently, Clara has the ability to sub-consciously influence her Zygon duplicate, Bonnie, to the point where she can even force Bonnie to text The Doctor without knowing (seriously? How did she pull that off?!), and this leads to Clara giving The Doctor and Osgood a window to escape with some convenient parachutes. Obviously, they weren’t going to die, despite last week’s decent cliffhanger, but the whole idea of Clara being able to manipulate Bonnie, even slightly, somewhat neutered Bonnie as a threat, and seemed to be a forced way for the writers to get out of a corner that they backed themselves into.

The big cliffhanger with Kate also ended up being entirely pointless, since she simply pulls out a gun and shoots the Zygon that appears. Are you kidding me?! So much for that issue. Granted, it was clever to have Kate hide among the Zygons and pretend to be a duplicate, to the point where it fooled even The Doctor, and will probably fool most viewers, but, “Five quick rounds” is not a badass solution to Kate’s Zygon problem. It’s a lazy one.

At the very least, the episode compensated well with some standout scenes between Clara and Bonnie, as the two try to wrestle for the upper hand in the Zygon invasion, as well as for The Doctor and Osgood, particularly during the episode’s climax, where we see what the hubbub is about, regarding Osgood’s Box. Some of this was a solid callback to the 50th Anniversary Special, though it still seems like New Who has a problem with leaning on the Time War as too much of a narrative crutch in scenarios like these, where The Doctor goes on a big tirade about the futility of war and other such things. Surely, the Time War is not the only comparison he can make for situations like these.

To be fair though, this scene with The Doctor was quite good, and served as one of the better points of the episode. How this goes is, The Doctor claims that there are actually two of Osgood’s Box, with one permanently unmasking Zygons across the globe, and the other permanently destroying all Zygons across the globe. The Doctor built this setup as a symbolic allegory for all of war, as Kate stands on the side of the red box, which is said to destroy the Zygons, and Bonnie stands on the side of the blue box, which is supposed to unmask the Zygons, pushing Bonnie’s agenda of provoking a war by scaring the humans into fighting the Zygons, and eventually losing. 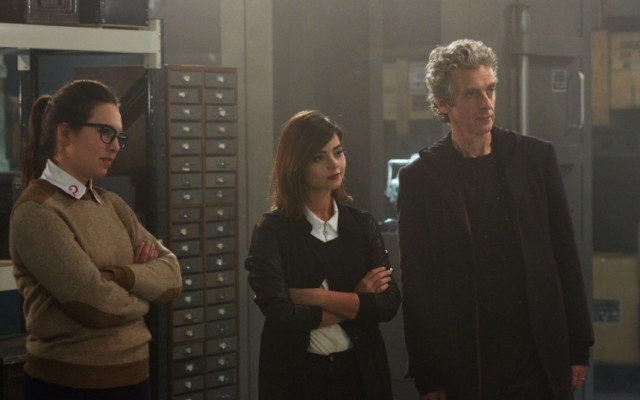 Unfortunately, after The Doctor’s riveting and thought-provoking speech on the horror and futility of war, the rest of the episode seems to fall flat on its face, and that’s very frustrating. Bonnie is ultimately an ineffective antagonist, since she admits to not thinking her plan through, and not considering that there’s not enough Zygons on Earth to uphold a worthwhile society. Moreover, she also somehow thought that 20 million Zygons could take on 7 billion humans, and win. Ummm… No. Even The Doctor points out that the Zygons are not that capable in battle, and that’s before you consider how hilariously outnumbered they are, and that a good chunk of the Zygons don’t follow Bonnie anyway, and don’t want to fight with the humans. Yeah, how exactly was this idiotic invasion plan supposed to work, Bonnie?!

On this note, the reveal that the boxes actually do nothing, and The Doctor, for whatever reason, set up this entire scenario just to make a point, felt like a bit of a narrative middle finger to the audience. It’s clever to a degree, but it’s one of the biggest contributors to the feeling of why “The Zygon Inversion” (and its predecessor from last week), is a let-down; A lot of the episode ultimately amounts to nothing. The cease-fire is restored, the casualties are completely forgotten about, the apparent destruction of UNIT in the U.K. seems to be entirely swept under the rug, and worst of all is that Bonnie gets off completely scot-free! Yes, I’m aware that The Doctor forgave her to contribute to his point of peace being the only option, even when it’s undesirable on a base level, but she’s still a war criminal. She still led to the senseless slaughter of many, many people across the U.K. Are you seriously just going to let her become another Osgood double and go on your merry way, Doctor? 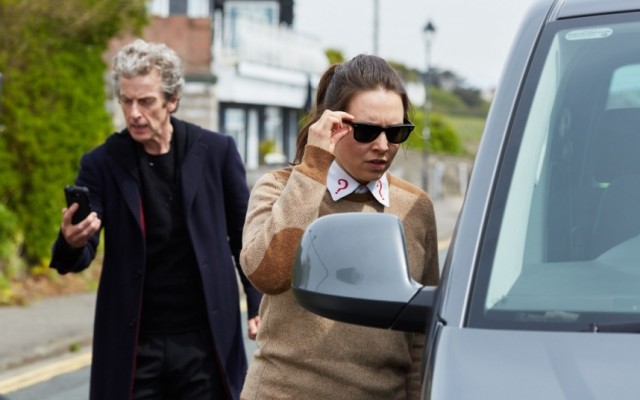 Oh, yeah, that was the dubious retcon that I was talking about. The episode pours salt in the wound of botching the opportunity to really effectively utilize the false death of Osgood from the Series Eight finale last year, by just having Bonnie become the Osgood double, thus erasing the other double’s death completely, and rendering it entirely pointless, on top of giving Bonnie a very undeserved slap on the wrist. Even Osgood suddenly seems to stop caring about the death of her, “Sister” once she has another Zygon double. This just makes the ambiguity surrounding the surviving Osgood’s identity even more pointless! At the very least, The Doctor offering Osgood the chance to travel with him was cool, especially since we know that Jenna Coleman is leaving the show this season, but it was obvious that she was going to say no. Her excuse of having to watch a box that doesn’t do anything was pretty bad too.

On one last note, The Doctor also wipes Kate’s memory after revealing that the boxes are dummies that don’t actually do anything. Why?! What does this accomplish?! Kate was the first one to stand down in the tense confrontation with Bonnie. It’s not like she’s holding a dangerous secret. Even if the Zygons were to somehow get to the boxes again in the future, they’d just discover the hard way that the boxes are useless. So, why exactly does Kate get the memory wipe?! Wouldn’t it make more sense to wipe Bonnie’s memory instead? That might have made turning her into another Osgood double more believable. If the idea was to give Bonnie a penance, the show didn’t seem to create any real fallout from this. Again, I’m well aware that this episode was supposed to be a peace parable, but peace doesn’t mean that guilty parties don’t have to face justice!

The Zygons have proven to be effective and iconic foes in Doctor Who, even in their one-off appearance from Classic Who, but “The Zygon Inversion” made them look like amateurs throwing a temper tantrum. Likewise, they were completely let off with little more than a warning, which is kind of a slap in the face to everyone who lost friends and loved ones in this stupid, pointless conflict. I get that it’s supposed to be a stupid, pointless conflict, but playing off a stupid, pointless conflict with no consequences, no results and nothing seeming to be gained or lost for UNIT, the Zygons or Doctor Who as a whole, just makes for a very disappointing and irritating episode that had no payoff whatsoever. Given that Series Nine has delivered a trio of strong Doctor Who two-parters up to this point, it’s very disappointing to see the show completely fumble such a promising concept. Needless to say, the Zygons deserve better.

Doctor Who 9.8: "The Zygon Inversion" Review
Doctor Who ultimately fumbled its big Zygon invasion plot in its concluding half this week, thanks to a frustrating resolution that lacked any kind of consequence for either side, and a big Doctor twist that ended up being more infuriating than clever.
THE GOOD STUFF
THE NOT-SO-GOOD STUFF
2015-11-08
63%Overall Score
Reader Rating: (1 Vote)
65%