The size of Zelda games of years past has never really been a big point of contention the way it has been with games like The Witcher, Grand Theft Auto, or Skyrim.

However, the upcoming Wii U title in Nintendo’s mega-series may change that as its open world is beginning to seem larger and larger in comparison to these other huge franchises.

Eiji Aonuma, the game’s producer, has said previously that the game is roughly the size of Kyoto, at around 320 square miles. While that’s nothing new, it isn’t why we’re here. A Zelda that big would be an absolutely gargantuan map, and while we can only speculate on what the actual figure will be until the game’s release next year, we thought the best way to conceptualize it would be to compare it to some of the most popular games of the last few years. Being the size of Kyoto would make Zelda Wii U roughly:

We can’t stress enough how unrealistic these numbers seem, but who knows how Nintendo could make some magic work. The ridiculousness of the numbers seems virtually impossible, but it could be really interesting to see such a huge world in one of our favourite universes.

Even with double-digit multiples, Zelda Wii U isn’t even close to first place as far as map size goes. Some games are much larger, making Zelda seem like a shoebox in comparison. For example:

A huge, open-world Zelda game is something we’ve wanted for a while, and it’s really interesting to see how its potential size compares with something like Skyrim and GTA. Even games like this holiday’s juggernaut Fallout 4 are much smaller than what we expect to see from Zelda Wii U. 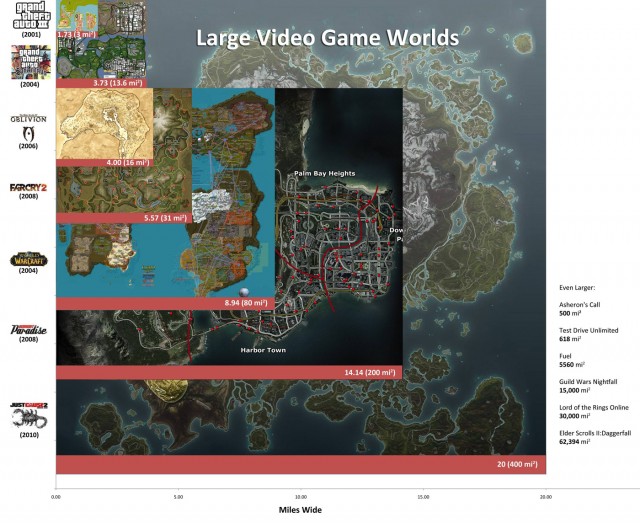