Mortal Kombat X isn’t done adding downloadable bonus fighters to its roster. After a leak seemed to confirm that a quartet of new fighters were coming to Warner Bros. and Netherrealm Studios’ very well-received tournament brawler, the news was made official at The Game Awards tonight.

Kombat Pack 2 will serve as a second ‘Season Pass’ of sorts for Mortal Kombat X, with the $29.99 Kombat Pack 1 expansion adding Tanya, Predator, Tremor and Jason Voorhees to the roster for purchasers previously. Kombat Pack 2 meanwhile is set to add Mortal Kombat veteran, Bo Rai Cho to the roster, a drunken martial artist who trained series heroes like Liu Kang, along with Alien monster, the Xenomorph (to complement Predator), Texas Chainsaw Massacre killer, Leatherface, and an all-new personality called ‘Tri-Borg’, who will combine battle styles and traits from cyborg characters, Cyrax, Sektor and the classic cyborg incarnation of Smoke, even though he was previously written out of the series’ rebooted timeline under Warner Bros., and replaced with a new cyborg version of Sub-Zero in the previous reboot game from 2011.

A trailer showcasing the new fighters was initially leaked, before being officially released soon afterward. The trailer also seems to confirm that the Xenomorph appears to have adopted some traits from the Tarkatan race, which series veterans, Baraka (and Mileena, somewhat) belong to. This is likely to make the Xenomorph feel more like an authentic Mortal Kombat fighter. The leaked statement that goes with the trailer also seems to indicate that Kombat Pack 2 will be released early in 2016. 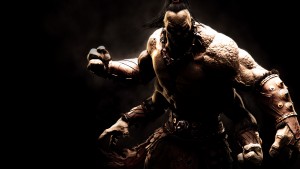 We reviewed Mortal Kombat X back during its launch on PlayStation 4, Xbox One and PC during this past Spring, and praised it for its well-crafted fighting mechanics and top-notch production values, awarding it a great 85% score. We did however take issue with the sleazy DLC practices and microtransactions, as well as the lacklustre quality of the PC port. The game was also formerly planned for release on Xbox 360 and PlayStation 3, though these two last-gen ports ended up being cancelled, several months after the current-gen builds had already launched.

Keep finishing Eggplante for all news and updates on the Mortal Kombat series.