Brooklyn Nine-Nine returned after its week-long hiatus, with one of its best episodes yet this season! “The Swedes” was a fantastic offering all around, giving each of the characters lots of grade-A jokes to work with, led with a great main plot involving Peralta and Diaz, and some very annoying competition.

The main plot of the episode involves Peralta and Diaz arresting a perp with ties to a Swedish diamond smuggling ring. Since the crime requires the assistance of the Swedish authorities, two Swedish cops from INTERPOL are dispatched to assist in the investigation, in the form of Soran and Agneta, played by Anders Holm and Riki Lindhome, respectively. The cops are immediately competitive with Peralta and Diaz, and both decide to try and prove that they’re superior cops than the Swedish guests, predictably failing at every turn, to hilarious effect. 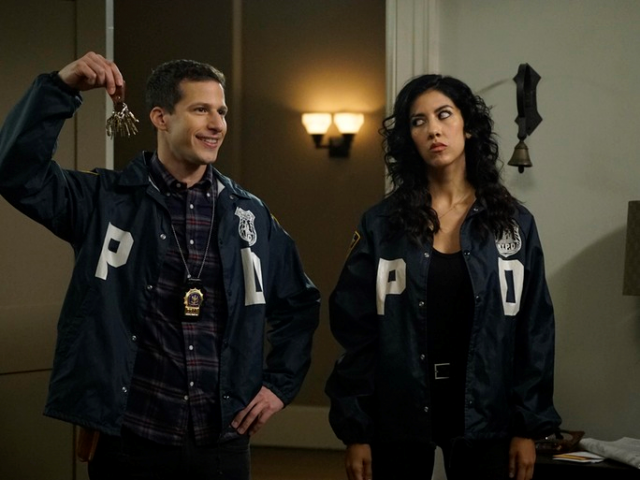 If one were to nitpick, you could argue that the outwardly laid-back demeanour of the Swedish cops doesn’t totally fit with their sudden, inexplicable hostility towards Peralta and Diaz, but that’s largely a minor detail. Besides, this isn’t the first time that this show has been considerably removed from reality. It’s also easy to forgive any psychological oddities with the Swedish characters, who are more or less caricatures that are simply meant to push all of Peralta’s and Diaz’s obvious buttons, when the episode is written so well, and is often so brilliantly funny. Peralta and Diaz are both skilled detectives that just happen to have very extreme personalities, and seeing two foreign cops constantly outdo them was very funny, since we know that the two are certainly not incompetent at their jobs!

The creepy closeness between Soran and Agneta was pretty funny as well, and played beautifully off of Diaz’s comical desire to be distant from even people that she considers close friends, like Peralta. This actually led to some halfway decent drama between Peralta and Diaz as well, when the two end up trapped in a smuggling truck, after they find out that the Swedish cops had read a date wrong, on account of the abbreviated dating order being different in Europe in contrast to the U.S., and Peralta finally calls out Diaz for being unnecessarily removed from his concerns.

It’s rare that we see Peralta lose patience with people like this, even if he is a sore loser, and his seemingly benign concern about an anniversary gift for Santiago, which Diaz continually ignores, helped to nicely build up to this, as did Peralta not being aware that Diaz broke up with Marcus until she accidentally mentions it. It makes a lot of sense that Diaz wouldn’t have told anyone besides Holt that she split up with Marcus (since Holt would definitely find out anyway), especially when we know that it emotionally affected her as much as it did, and it was brilliant of Brooklyn Nine-Nine to mine Diaz’s emotional coldness for both great comedy and great drama this week. 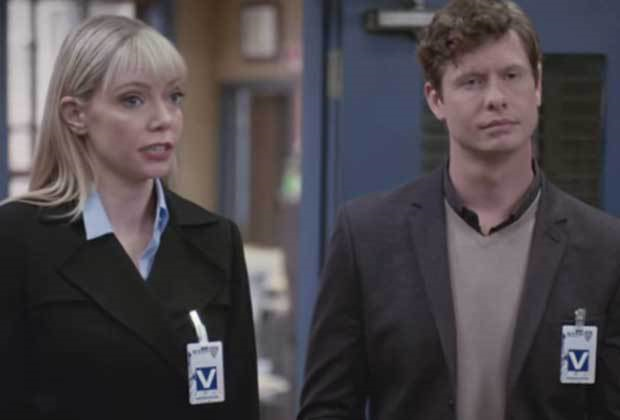 Regardless, Peralta and Diaz make their arrest, get one over on the Swedish cops (who take the loss in stride, much to Peralta’s irritation), and Diaz decides that she could do with opening up more. This has the episode closing on an especially hilarious gag, as Diaz says that her new boyfriend can allow Santiago to stay in the New York Library overnight for an anniversary gift, and chugs a series of drinks, many of which aren’t hers, simply to tell Peralta that her boyfriend’s name is, “Tom.” Naturally, Peralta is incredibly excited, and Diaz has matured a bit. Victories all around!

Actually, competition was also a big theme in one of the subplots, involving Holt having to say goodbye to his husband for six months, though unfortunately, this comes when Holt wishes to win a racquetball tournament that Holt usually participates in with Kevin. Holt decides to take Boyle along, though Boyle is afraid of his competitive side, to the point where he’s so hardcore about racquetball, that he actually once ate a ball in front of a teammate, just to psyche him out, and the ball is still in his digestive system! I believe it. Boyle initially tries to nerf himself for the tournament, though Holt eventually encourages him to unleash the beast, which leads to a hilarious montage of Boyle’s poor sportsmanship, before the two win the tournament, and are banned from the league for life right afterward. It was a somewhat brief plot, but one that was consistently very funny, with even the show acknowledging that Boyle and Holt could use more face time together.

Finally, Gina also anchored another strong and very funny subplot, as she freaks out about failing an astronomy exam for night school, and subsequently failing the class. Santiago and Jeffords try to team up to make Gina more interested in science, to the point where Jeffords even brings in Neil DeGrasse Tyson, who is apparently a gym buddy of his, making for a hilarious cameo that DeGrasse Tyson actually nails! When even DeGrasse Tyson fails to get Gina interested however, it looks like she’s going to fail, though Santiago and Jeffords try one last-ditch effort to teach Gina in terms she’ll understand; Dance! This is a funny resolution, especially when Gina announces afterward that she actually took the exam already, and passed, and just wanted to see Jeffords dance, so she allowed the dance to play out. Another very amusing and fitting resolution to a great subplot, especially when Gina, like Diaz, saw a small bit of maturation, and actually admitted to cracking open an astronomy book at will, when she saw how passionate Santiago and Jeffords were about it. 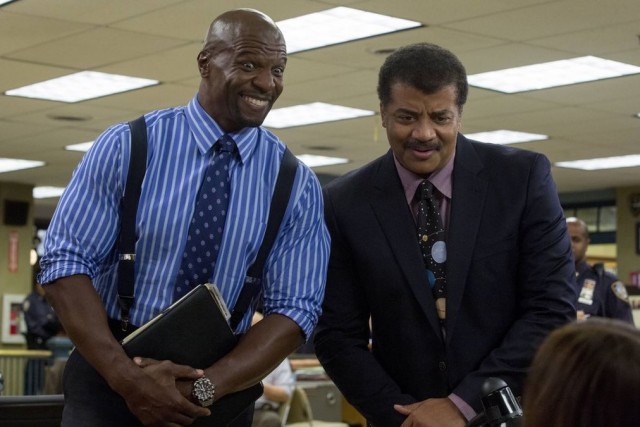 “The Swedes” felt like a real home run for Brooklyn Nine-Nine, packing tons of great laughs, standout guest roles, especially the Neil DeGrasse Tyson cameo, and even some pretty strong story material for Diaz and Gina especially. This was ultimately an episode that just did everything it set out to do very well, and even managed to push some of the characters ever so slightly forward in some very rewarding ways, while teaming up characters like Boyle and Holt, and Peralta and Diaz, who haven’t been effectively paired in a while. There’s just one episode left for 2015 at this point, but if this momentum keeps up, Brooklyn Nine-Nine will conclude both its run on Sundays, and of 2015, on a fantastic high note!

Brooklyn Nine-Nine 3.9: "The Swedes" Review
Brooklyn Nine-Nine delivered one of this season's best episode yet this week, as two annoying Swedish cops put Peralta and Diaz's friendship to the test, Boyle's hysterical competitive side comes out, and Gina fails to take an interest in nerd science.
THE GOOD STUFF
THE NOT-SO-GOOD STUFF
2015-12-07
94%Overall Score
Reader Rating: (0 Votes)
0%