It’s pretty much inevitable that a show themed around Superman, or in this case, Supergirl lore, would eventually involve a plot about the main hero losing his/her powers. That’s exactly what “Human for a Day” entailed, as we got the obligatory proof that Kara is a hero, even without her many Kryptonian powers at her disposal. That shouldn’t be cause for concern though, as “Human for a Day” is far and away the best episode of Supergirl yet, especially thanks to a huge twist with one of the leads that’s revealed towards the end of the episode.

Things begin with Kara predictably concerned that her powers are gone, after the battle with Red Tornado during last week’s episode. The DEO rigorously scans Kara, but can’t seem to find anything wrong with her. James however has the scoop, saying that Superman has lost his powers on more than one occasion (of course), and even bringing up the all-new ‘Solar Flare’ power that has only very recently been introduced into Superman’s arsenal in DC Comics! It was neat to see another piece of DC media acknowledge this brand new ability of Superman’s, as well as proving that Supergirl can do the same thing. As with the recent comics from DC, when a Kryptonian unleashes the pent-up energy of their yellow sun radiation, it takes them around a day or two to recharge (pretty much, one day for Superman, two for Supergirl), only Kara’s powers still aren’t returning, even after two days. Eep. 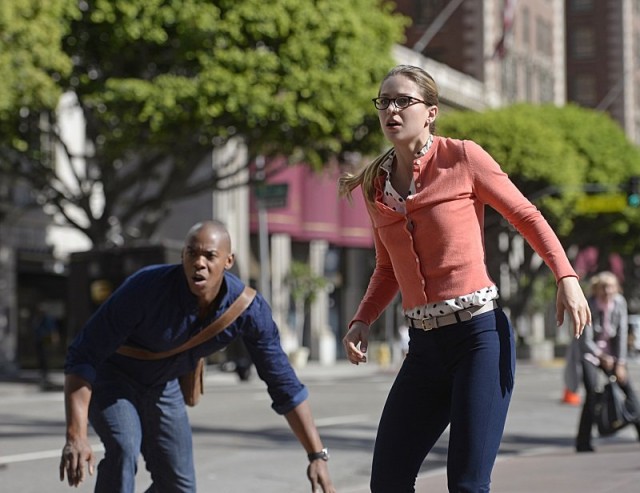 Kara also speaks too soon when she says that National City can survive without Supergirl for a day, mere seconds before a major earthquake rocks the city, leading to tons of damage, crime, and a general mess. One of the most dangerous aliens being held by the DEO, Jemm, another recognizable alien from DC Comics lore, also gets loose, though Alex and Henshaw decide to handle that problem internally, due to Kara not having her powers. In fact, Kara doesn’t even encounter Jemm at all this episode, and never even learns that he broke out!

That might be a good thing though, as Jemm is the only weak link in an otherwise awesome episode. Once again, he’s a bland, forgettable baddie that only seems to be evil for the sake of being evil. There’s a lot more to him in DC Comics lore, but as with Red Tornado, Hellgrammite and Vartox, he’s simply reduced to being another shallow villain-of-the-week here, and another waste of a character from DC Comics. Too bad.

Regardless, the episode is divided into two plots, with one involving Kara, James, Winn and Cat trying to contain the damage of the earthquake in their own ways, and the other involving Alex and Henshaw trying to contain Jemm in the DEO prison. Both plots are great showcases of how powers alone don’t define a hero in this universe. Even without her abilities, Kara finds a way to pitch in where she can, with one of the best scenes involving her donning her Supergirl costume, and staring down a criminal with a gun in her face, trying to talk him down from committing a robbery. It’s a brilliantly tense scene, since we know that Kara will be killed if she’s shot here, but the other characters beyond the leads don’t know that. Kara’s bravery has never been more palpable, and James even captures this fantastic moment on camera, with us finally getting to see James’ photography skills from the comics in action properly for the first time.

Speaking of James, it’s about time, but the show finally found a great use for him this week! James documents Kara’s true, powerless heroism beautifully, and we even get to learn some pretty cool insight into his backstory, as he confides in Kara that he took up photography because he inherited his father’s camera, after his father died in the Gulf War. Hearing how James ticks finally makes him feel like more than a token love interest for Kara to pursue, and more like his established personality from DC lore.

Even Cat gets one of her best turns yet in this episode, after seeming to get gradually better from her rather exaggerated portrayal from the early episodes. Cat makes an honest appeal to the city after Winn gets CatCo’s broadcasting capabilities back on line, where she appeals to the city to be inspired by Supergirl’s example, even in Supergirl’s absence. It’s a fantastic speech, to the point where Kara even flies to Cat’s office to thank her at the end of the episode, after her powers return when she must save James from plummeting to his death in an elevator shaft during the climax. Yes, Kara gets her powers back by the end of the episode. Come on, it’s not like she was going to be without them for that long!

Kara also has to do most of her heroics with a broken arm to boot, which she suffers early, after James has to push her out of the way of a car, right when the earthquake hits. Yes, she had to fake being Supergirl with a broken arm. That’s dedication! In fact, it made Maxwell Lord come off as an even bigger douche when he continued to pick on Supergirl upon her absence, but hey, I don’t expect to like the guy any time soon, and viewers probably shouldn’t either. Yes, Maxwell Lord is a dick in DC Comics lore too, but at least he’s an interesting dick in the printed panels!

As awesome as the Kara plot was though, Alex’s plot shone as well. Alex also got her best turn to date, as she must take charge upon Jemm getting loose, with soldiers getting sent to slaughter by Henshaw, who Alex doesn’t trust, upon recently learning that Henshaw was there when her father was killed. Things especially come to a tense head when Alex confronts Henshaw, and orders him to cuff himself to a bar, while she takes care of Jemm herself. This results in a pretty cool action scene, and one that ends in an even cooler fashion, after Alex manages to shoot the psychic stone out of Jemm’s head. After it looks like Alex is about to be killed nonetheless though, a mysterious caped shadow swoops down to finish Jemm for good, with Alex later seeing Henshaw when she regains her senses, despite Henshaw being handcuffed to a bar very recently. Clearly, he has some explaining to do.

Alex confronts Henshaw again, and learns a shocking secret; “Henshaw” is not actually Henshaw at all! Instead, he’s an alien refugee, hence why the show has been teasing us with his sporadic red eyes in certain scenes. Yes, a whole bunch of DC fans called it. “Henshaw” is indeed DC’s high-profile superhero and Justice League founder, Martian Manhunter, the last survivor of Mars! How freaking amazing is that?! It even fooled me, as I thought that the red eyes were a hint of Henshaw’s comic book lineage as villain, Cyborg Superman. Well played, DC!

Manhunter has been in hiding for many years, assuming Henshaw’s identity (as with the comics, he’s a shapeshifter that can mimic human form), and since Jeremiah Danvers sacrificed his life to protect Manhunter from an overzealous Henshaw, who sounds more in line with his villainous bend from DC lore from this account, being an obsessive alien hater, Manhunter promised to look after Jeremiah’s daughters, recruiting Alex into the DEO to help keep that promise. Manhunter then reveals his true form, the first time it’s been properly shown in live-action, and man, does it look amazing! We probably won’t see too much of it for now, beyond big moments, but the twist of Henshaw actually being Martian Manhunter was awesome nonetheless, adding another superb DC personality to Supergirl to great effect, especially when Manhunter stresses that Kara can’t learn his secret. How ironic. We’ll see how long that lasts. 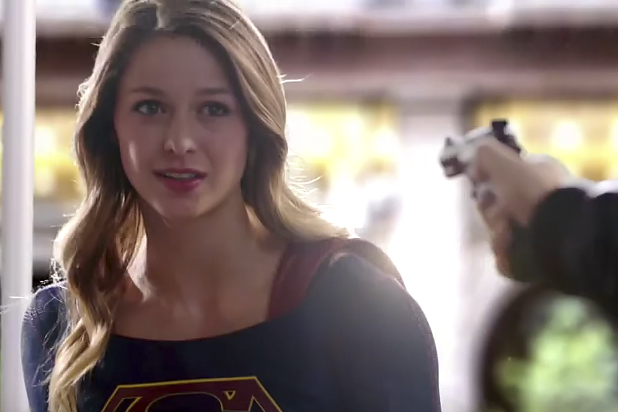 Supergirl really felt like it hit its stride like never before this week in “Human for a Day”, after some slight ups and downs with its prior run of episodes to date. The series achieved a new high by fully cementing Kara’s appeal as a superhero, while giving all of the lead characters some great material to highlight their own courage (even if Winn was a bit more whiny this week), and even adding another fantastic new DC personality to the lead ensemble, in a great twist. I have every ounce of faith that this series can continue to improve from here. Like Kara herself, this is the first time that the show has felt like more than colourful action, girl talk and struggling to get out from Superman’s shadow. This is the first time that Supergirl has proven beyond a doubt that its cast and lead heroine can stand on their own. A vital step has finally been achieved, and it now feels like Kara’s heart and conviction are truly just as lovable and effective as her fists and flight!

Supergirl 1.7: "Human for a Day" Review
Supergirl delivered by far its best episode to date this week, as a de-powered Kara must struggle to save face and maintain her heroism after a major crisis, while Alex learns a very shocking (and awesome!) secret about her boss!
THE GOOD STUFF
THE NOT-SO-GOOD STUFF
2015-12-08
93%Overall Score
Reader Rating: (0 Votes)
0%