UPDATE: Shortly after the pilot order was confirmed for ‘Most Wanted’, and ABC’s president gave an update on the two other in-development ABC pitches planned for the Marvel Cinematic Universe, ‘American Crime’ creator, John Ridley separately spoke about his top secret in-development Marvel Television project, confirming that it is still, “Very much alive.” Ridley’s series hasn’t yet been greenlit, and he still didn’t give any details about it, though he did give a hint in comparing it to Marvel’s recent Netflix series, ‘Jessica Jones’, expressing a desire to replicate the same psychological and social commentary from that series. He also however declared it more, “Straight entertainment” than ‘American Crime’, and said he would fully embrace the idea of working in that medium with his Marvel series as well.

It looks like Bobbi Morse and Lance Hunter may be breaking away from the S.H.I.E.L.D. crew sooner than anticipated. With ABC taking the spotlight at the Television Critics Association Winter Tour today, the network confirmed that they are proceeding ahead with a pilot order for Most Wanted, an Agents of S.H.I.E.L.D. spin-off that is set to star Adrianne Palicki’s Bobbi Morse and Nick Blood’s Lance Hunter. 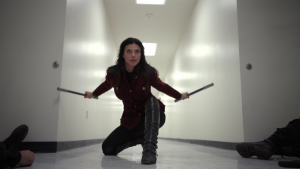 ABC president, Paul Lee enthusiastically proclaimed that the network is, “Absolutely” going to be fast-tracking Most Wanted, shortly before confirming that the new series is among ABC’s pilot production orders for next season. Originally, Lee and the network passed on the proposed spin-off series in 2015, claiming that they felt that Bobbi and Hunter were best left on Agents of S.H.I.E.L.D. at that point. It would seem with the direction of the current Season Three of Agents of S.H.I.E.L.D. however, that Lee and the rest of the higher-ups at ABC have changed their minds, leading to Most Wanted being revived as a pitch.

This would seem to confirm that Adrianne Palicki and Nick Blood will be leaving Agents of S.H.I.E.L.D. after this season, should Most Wanted get picked up, and considering Lee’s enthusiasm with the current incarnation of the project (he even sung the praises of the pilot script), it’d be surprising if the planned spin-off didn’t end up being part of ABC’s television lineup this Fall. All that’s known about the premise of Most Wanted for now is that it’s a drama series that’s set to involve Bobbi Morse and Lance Hunter pursuing enemies as apparent vigilantes, though it’s unknown exactly who the show’s antagonists may end up being at this point. Obviously, the show will also take place within the Marvel Cinematic Universe, potentially setting it up to interact with characters and scenarios from Marvel’s stable of movies and other television shows.

Most Wanted was created by Agents of S.H.I.E.L.D. producers, Jeff Bell and Paul Zbyszewski, who will also serve as showrunners and executive producers of the spin-off. Marvel Television head, Jeph Loeb will also be an executive producer of Most Wanted. Since Bell and Zbyszewski are likely moving to Most Wanted, Agents of S.H.I.E.L.D. may get a small creative shake-up, should it be picked up for a fourth season. 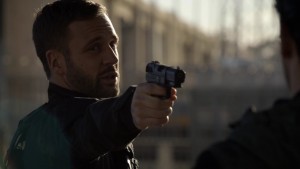 When asked about the renewal chances for Agents of S.H.I.E.L.D., Lee maintained ABC’s unique policy of always withholding renewal announcements until May (most other networks occasionally announce early renewals for especially beloved shows), though he did say that he, “Feels good” about Agents of S.H.I.E.L.D. being renewed for Season Four at this point. Lee also took the opportunity to announce his happiness with Agent Carter, ABC’s Marvel miniseries that will debut its ten-episode second season on January 19th, as well as the Marvel shows on Netflix that ABC assists in the production of. As with Netflix at this year’s Winter TCA Tour though, Lee had no insight as to a possible renewal for Jessica Jones, nor a possible release window for Luke Cage.

When asked for updates on American Crime creator, John Ridley’s in-development Marvel series, believed to be starring Muslim Marvel heroine, Kamala Khan, the current incarnation of Ms. Marvel, as well as the previously-announced Marvel Cinematic Universe-set ABC sitcom, Damage Control, Lee played coy, and simply said that Agents of S.H.I.E.L.D. and Agent Carter are ABC’s two current Marvel shows, and Most Wanted is the one in active development. This could mean any number of things for the John Ridley project and Damage Control, though the most likely speculation is that the two shows remain in development, but are possibly not planned for the 2016/2017 television season, either because they haven’t fully gelled yet, or simply because ABC didn’t have the necessary vacancies in their planned schedule for next season. If Damage Control skips next season however, that would prove surprising, since NBC announced yesterday that their competing DC Universe-set sitcom, Powerless is getting fast-tracked for next season, with a confirmed pilot production order.

Keep hunting Eggplante for all news and updates on Most Wanted, Agents of S.H.I.E.L.D., and other television projects for the Marvel Cinematic Universe.