Brooklyn Nine-Nine put the entirety of the 99th Precinct in a rather difficult situation this week, as the 9-8 cops are forced to temporarily shack up with them during work hours, after their building becomes uninhabitable, leading to predictable tension and discomfort. Turns out, the 9-8 are rather poor guests, with only Peralta getting a stroke of luck, as he’s reunited with his first beat cop partner, Steve, played in a guest role by New Girl’s Damon Wayans Jr.

The entire episode tended to hinge on one singular joke, and this leads to an episode that is funny, though not quite as strong as the past few episodes that Brooklyn Nine-Nine has offered over the past several weeks. Each character was given some amusing gags, though the humour was largely straightforward and predictable in many cases. I wouldn’t go so far as to say that this felt like a filler episode, especially when filler episodes are far less common in comedies as opposed to dramas, though it did feel like a certain spark of inspiration was sadly missing from, “The 9-8.” 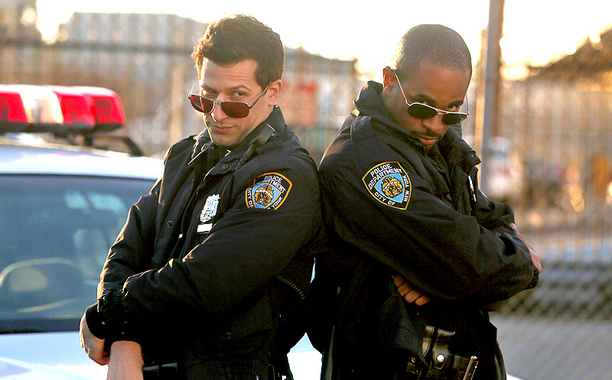 Nonetheless, the main material with Peralta and his former partner was pretty appealing, and largely dominated the episode. Andy Samberg and Damon Wayans Jr. have an outstanding rapport with each other, and getting insight into Peralta’s origins as an equally immature beat cop was pretty funny. Boyle, naturally, gets jealous of Peralta re-discovering his old pal, and takes an immediate dislike to Steve, though Peralta nonetheless aims to include Boyle on a case that Steve asks Peralta for help on, tracking down a drug dealer that Steve is determined to arrest.

After some more goofy shenanigans, the trio bust the drug dealer, only to find no evidence on his person, so the arrest doesn’t stick. Since the guy is hanging out in a bar with known felons however, this constitutes a parole violation, which allows the three detectives to search the guy’s apartment, where Steve finds the drugs they need for evidence in the dishwasher. Boyle however is suspicious, which Peralta initially dismisses, though Boyle soon after pulls Peralta aside to say that he saw Steve plant the drugs. Since Boyle is not a liar, Peralta confronts Steve about the accusation, leading to a very uncomfortable office punch-up, which later kicks off the climax of the entire episode to very funny effect.

Rather than have a set subplot or two this week, “The 9-8” instead seemed to structure itself in such a way that every main character of the series, save for Peralta, found something to be annoyed at in their new deskmates. A lot of these are predictable jokes, even if they are still worthy of some chuckles. Santiago ends up next to a self-centered detective with a fake service dog, sending her allergies into a frenzy. Diaz is sat next to an annoyingly chatty woman who spends most of the day looking up recipes. Captain Holt is even forced out of his office by the peanut-eating, online poker-playing captain of the 9-8, yet like Jeffords, he tries to keep the discontented Nine-Nine in check, even though Gina tends to encourage the trouble for Holt in particular, even further.

Eventually, this leads to Jeffords giving up on his facade of good humour, when Santiago and Diaz stumble on Scully and Hitchcock setting up a microwave on the terrace outside. After Scully and Hitchcock go back inside and accidentally start a fire in the kitchen, Jeffords, Santiago and Diaz use that as cover to sneak all of their office wares outside, to avoid dealing with their guests. Holt however finds them and reprimands them, forcing them all back inside, just in time for Peralta to keep punching up Steve, resulting in a full-on brawl between both precincts! Seriously, how does the 9-8 even function, with a precinct this inept and careless?!

This was a hysterical way to end the episode, especially when Holt reprimands everyone in the conference room afterward, revealing that the fight busted a radiator pipe that broke the precinct’s heat, thus forcing the 9-8 to relocate again. Gina however points out to Holt afterward that she saw Holt bust the radiator himself, with Holt finally admitting that he couldn’t stand the 9-8’s captain any more than the detectives could stand the other detectives. All’s well that ends well, I suppose, and things wind down with Peralta and Boyle driving an arrested Steve to… Somewhere else (they can’t hold him at the Nine-Nine?), and singing a tune together. 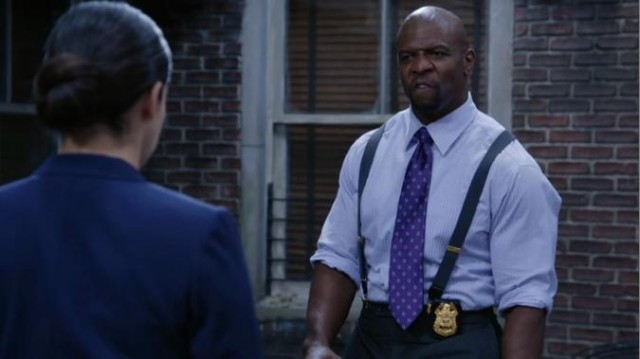 Like I said, this wasn’t the best Brooklyn Nine-Nine episode that this season has offered, but it was still a funny and satisfying episode overall. Even if only so much was done with the joke of the 9-8 being really annoying work guests, the standout material with Peralta, Boyle and Steve helped to elevate the episode, and the climactic resolution of the big cop brawl was an amusing end to things. Even Holt had no choice but to eventually acknowledge that the 9-8 were impossible to work with. Perhaps the season has had better jokes to sustain its past few episodes, but even at their collective wit’s end, the Nine-Nine is fortunately still as charming as ever.

Brooklyn Nine-Nine 3.15: "The 9-8" Review
Brooklyn Nine-Nine's latest episode didn't quite measure up to its past few highly successful episodes, but the temporary move-in by the 9-8 still offered a satisfactory amount of laughs, particularly when we get some insight into Peralta's beat cop origins.
THE GOOD STUFF
THE NOT-SO-GOOD STUFF
2016-02-10
82%Overall Score
Reader Rating: (0 Votes)
0%