After a couple of bumps with, “Wedding Day Sale” last week, Superstore went back to a high point with, “All-Nighter.” Once again spotlighting the employee dynamic over work day shenanigans, this episode had most of the Cloud 9 work force locked in the store after hours, which gave them an opportunity to bond, as well as share their communal annoyance with their corporate overlords.

This episode also effectively capitalized on the minimum-wage setting in a novel, yet great way as well, since everyone ending up locked inside their workplace wouldn’t end up happening on The Office or Parks and Recreation. This misfortune being used as a vehicle to spotlight how Cloud 9 can treat its employees pretty badly is inspired, particularly when it comes to Glenn, who has one of his best turns yet this week, as he finally realizes how much he hates the company he works for, which comes out when he reveals that his family-owned tool shop ended up going out of business when Cloud 9 came to town. He even looks like he’s about to tell off his superiors on the phone, which Garrett witnesses, before Garrett then sees him re-record the message, and act like nothing was wrong. It creates a new air of tragedy to Glenn’s character, who is no longer just an unflappable Christian goof, and actually has worries and woes of his own, even if he represses them. 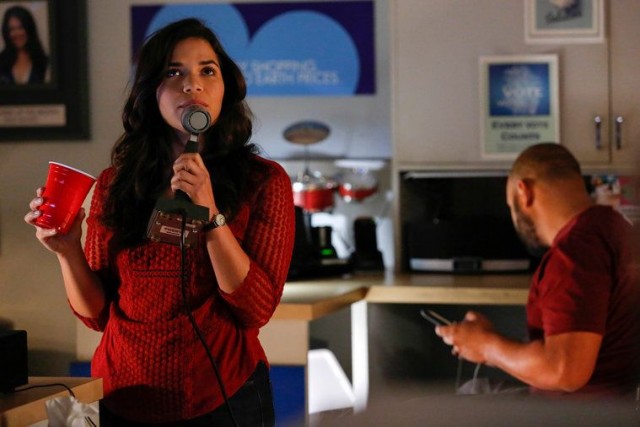 The idiotic policies of Cloud 9 may seem non-sensical to the privileged few who never had to work a minimum-wage job, or perhaps those that are too young to have entered the work force in any capacity, but if you’ve ever worked for a big corporation like the fictional Cloud 9, you’ll quite easily relate to the company’s seemingly illogical whims. This is why this episode was so effectively funny and charming, even amongst the other Superstore episodes that have aired so far, as it brilliantly illustrates just how much these big companies can step on the little guy, seemingly without any real incentive to do so. They just do it because they can, but as with the Cloud 9 employees, that doesn’t mean that the little guy can’t actually make the best of a corporation’s carelessness.

That’s exactly what happens, as Jonah eventually convinces the employees to have a party, taking various wares out of the store shelves, and using them for things like drunken fashion shows, campfire-style drinking games, and even an impromptu dance recital by Cheyenne, whose pregnancy prevented her from performing in the actual dance recital that she was planning to watch before getting locked in Cloud 9 with everyone else. Amy also gets an especially raw deal, since she had to study for a college midterm, and is now forced to take the test the next day with no studying accomplished, and no sleep, since she’s constantly been working at Cloud 9 up to that point, leaving her no time for her schoolwork.

Yet again, Jonah and Amy continue to grow closer, though this episode offered one of the better bonding moments between the two. Initially, Amy is once again defensive about Jonah’s carefree, optimistic attitude, complaining about Jonah’s lovable and memorable college experience by being bitter about having to go to college as an adult, due to getting married and having a child at nineteen. Amy’s stress leads her to drink quite a lot, more than the other employees, and eventually, Jonah has to sit with her in the bathroom. Soon before that, there’s an undeniably sad metaphor where Amy walks along a moving checkout conveyor, saying that it symbolizes her adult life to Jonah, though the metaphor is interrupted by the first rush of vomiting. One has to wonder if some sorry Cloud 9 employees coming in for the following day actually have to clean up messes like that, to be honest. 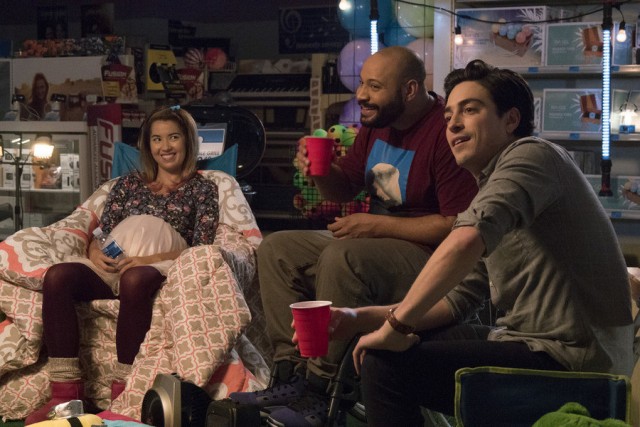 Fortunately, as much as there was a lot of emotion, especially disappointment and emptiness, in this particular episode of Superstore, we still got plenty of great jokes, even if the episode seemed to become more dramatic as it goes on. Seeing legitimately concerned employee, Sandra get stuck on a high shelf and left there when another employee takes her ladder away during the all-nighter is pretty funny, especially when she tries and fails to get the other workers’ attention as they’re partying away. Likewise, Dina has yet another standout joke sequence at the start of the episode, where she lists off the hilarious names of her many birds, then tries to coo them to sleep. Dina continues to be the best thing that ever happened to this show, no doubt surprising no one.

Speaking of Dina, despite not playing into the episode as much as the other employees for the most part this week, she did end up taking a massive step towards the end of the episode, as she enlists Mateo to give her a beautiful make-over, then, when she learns that supervisors are no longer forbidden to date employees, she lures Jonah into the photo lab, and confesses her love for him. This could have been a creepy or otherwise silly scene, but honestly, it was kind of heartbreaking, especially when we’ve clearly gotten so many laughs at Dina’s expense already, since she’s clearly oblivious to Jonah not being interested in her. There’s almost an innocence to the otherwise harsh, no-nonsense character of Dina this way, who is only given a soft, vulnerable spot from her feelings for Jonah. Jonah’s rejection of her actually hits pretty hard at first, though fortunately, Dina’s not giving up yet. She ends the episode by requesting a demotion to store associate from Glenn, believing that it’s the answer to Jonah’s heart, when Jonah claims that dating his supervisor is too complicated. This will no doubt be a big part of next week’s episode, and fortunately, Superstore struck a perfect balance between pathos, humour and courage in Dina’s character this week.

It’s becoming ever more joyful to spend time with the Cloud 9 crew in any context, and, “All-Nighter” cemented that these characters don’t need to be on shift to be enjoyable. This was one of the most emotional episodes for almost all of the characters on the series, particularly Dina, and the promise of a great Dina-centric episode next week, after she opts to step down as assistant store manager, is all the better. Getting to know these personalities beyond the corporation they work for proved to be an exceptional treat this week. Hopefully, someone eventually finds Sandra though, as funny as it would be to still see her on top of that shelf during next week’s episode!

Superstore 1.9: "All-Nighter" Review
Superstore took its lead personalities off-shift for the first time in, "All-Nighter", and proved that they're still great fun outside of their Cloud 9 duties, even if this was also well-balanced by some emotional and heartbreaking turns for Dina in particular.
THE GOOD STUFF
2016-02-14
90%Overall Score
Reader Rating: (0 Votes)
0%