Brooklyn Nine-Nine seemed to relax into a more familiar groove this week, delivering a decent episode with a good share of laughs, though one that wasn’t particularly memorable. This is despite a rather interesting concept for a main plot, which finally has the precinct’s best layabouts, Scully and Hitchcock properly entering the field again, after Peralta inadvertently dumps what turns out to be a very high-profile drug case on them.

This seems like an interesting idea, though it’s unfortunately based on a joke that the show has already done, at least partially. From the very early episodes of the show, during, “The Slump”, Peralta tried the same tactic, dumping a case on Hitchcock that he thought was no big deal, only to learn that he unwittingly gave up a massive bust. If you’re a longtime fan of the show, you’ll have seen this joke already, and that’s disappointing.

Still, the idea of stretching the joke a bit further isn’t completely unsound. This time, Peralta and Jeffords are directly part of the episode’s main plot. Jeffords even brings up that the precinct intentionally keeps Scully and Hitchcock out of the field, despite their long tenure at the NYPD, since they’re considered, “House mouses”, or cops that are better suited to paperwork than field work. Peralta however tries to contest this by encouraging Scully and Hitchock to take his case, and sure enough, this puts them in danger, when their ineptitude inevitably gets them in over their heads.

There’s some solid jokes derived from just how incompetent Scully and Hitchcock really are when it comes to field work, though sadly, this seems to fly in the face of the show setting them up as secret geniuses who simply don’t go out into the field because they’re lazy, not because they’re stupid. It sucks to see the show simply paint Scully and Hitchcock as shallow oafs here, with their disgusting and lazy disposition ending up saving the day when everyone is captured by the drug pushers, since it plays exactly into how we expect Scully and Hitchcock to act, and that leaves the episode feeling a bit predictable with this storyline’s humour. At the very least though, the episode ending with Jeffords providing Scully and Hitchcock with extra comfy new chairs, since the city is safer when they’re lounging around the precinct, was pretty funny.

Beyond the main Scully/Hitchcock conflict, we get two solid subplots, though again, nothing that compares to the highlight jokes of the past several episodes that Season Three has enjoyed. The first subplot involves Holt commissioning Boyle to work a case for a celebrity crime, and the second involves Santiago trying to figure out why Diaz won’t give blood, and discovering that she’s afraid of needles.

Between these two plots, it felt like the womens’ plot was the stronger of the two, especially in terms of the laughs. The Santiago/Diaz plot, which also ended up incorporating Gina, had a lot of the episode’s best laugh-out-loud moments to itself, as the three women resolve to grow and become stronger by conquering their respective fears. In all three cases, this was highly amusing, as Santiago is locked in the trunk of a police car for forty-seven minutes, with Gina giving her a diaper that turns out to be for a baby (is it worse that Santiago figured this out by even acknowledging the diaper?), and Gina successfully passing herself off as a sales person to some business people, as her worst fear is business men. Diaz possibly had the funniest joke though, when the subplot closes out with Diaz agreeing to give blood, and then psychotically screaming at the top of her lungs for the medic to stab her, claiming she’s psyching herself up. Never have we seen Diaz raise her voice like that, which made this probably the episode’s most hilarious moment overall.

This just leaves the Boyle/Holt plot, which felt like it was largely carried by Holt’s reliably eccentric personality. Boyle was merely left to play straight man to Holt’s star-struck demeanour, as the, “Celebrity” turns out to be an oboe player that Holt and his husband are big fans of, and it frankly felt like Joe Lo Truglio just wasn’t given anything to really do this week unfortunately. Fortunately, Andre Braugher picked up the slack very nicely, since it’s always equal parts funny and adorable to see Holt taking such pleasure in something that literally nobody else in the world cares about. It’s just too bad that Holt got all of the jokes, and Boyle was left with nothing to do but arrest the oboe player for faking a robbery, another story turnout that felt all too predictable. 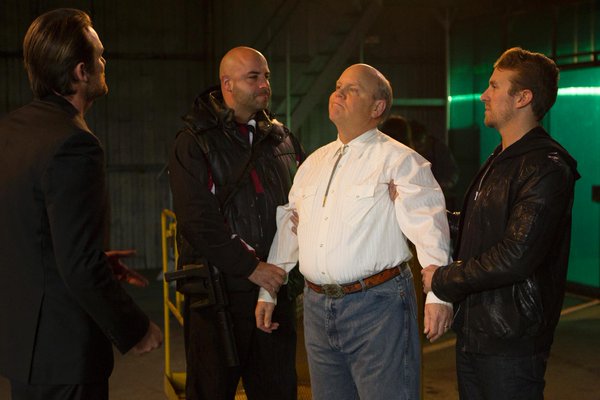 There have certainly been better episodes of Brooklyn Nine-Nine, especially recently, though, “House Mouses” was decent enough to satisfy. More could have been done with a few of the storylines, and it sucks that the show seemed to regress in terms of how it portrays Scully and Hitchcock, but at least the series’ humour and charm wasn’t compromised this week. Even in a slower week, it’s still a joy to make regular returns to the Nine-Nine this season, thankfully.

Brooklyn Nine-Nine 3.16: "House Mouses" Review
Brooklyn Nine-Nine delivered a decent, though certainly not great episode this week, one that tries to get Scully and Hitchcock a little more active to mixed effect, but is more often salvaged by the antics of Holt and the girls.
THE GOOD STUFF
THE NOT-SO-GOOD STUFF
2016-02-18
75%Overall Score
Reader Rating: (0 Votes)
0%